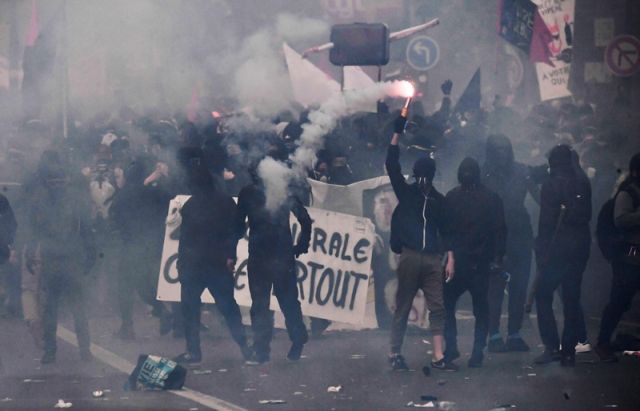 Paris : At least 200 people have been arrested after they clashed with the riot police and damaged properties in Paris during a traditional march to mark the International Workers’ Day, police said.

“We have been able to arrest 200 individuals stranded on Buffon street,” Paris Police chief Michel Delpuech told reporters on Tuesday, Xinhua news agency reported. He adding that 94 of them will face legal proceedings.

The arrest people are members of far-left anarchist groups, called as Black Blocs.

Seven others were detained. Three of them were suspected of throwing projectile at police officers and the rest for carrying prohibited arms, according to the prefect.

Around 1,200 hooded and masked protesters had turned up, earlier on Tuesday, on a rally of 14,500 of the so-called radicals, quite apart from the march planned by labour unions, which gathered 20,000 persons, according to the prefect.

“These individuals were motivated by the desire to disrupt the union meeting, to derail the day,” he said.

“When we saw this violence and the attackers’ determination, I immediately gave an order to stop the march,” he added.

Delpuech said “the extremely violent incidents” left one injured police officer and three people suffered minors wounds, adding that 1,500 police officers were deployed in French capital after a call on social media for a “Revolutionary Day”.

Other May Day protests were largely peaceful in French cities where between of 143,500 and 210,000 workers and students took the streets to protest President Emmanuel Macron’s reform drive.