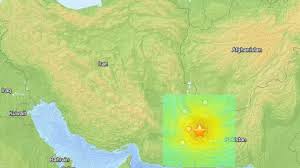 Islamabad, April 16 : At least 22 people were killed, over 100 others injured and hundreds of houses collapsed in earthquake that hit parts of east, south and southwest Pakistan on Tuesday, reported Xinhua citing local media.

Local media reported that the earthquake leveled over 1,000 houses to ground in Mashkel and its adjoining villages which are home to over 35,000 people. Sources from paramilitary troops confirmed that hundreds of houses were collapsed by the tremors.

More details about causalities and the conditions of injured people are awaited as the village is located in a far flung mountainous area, at about 514 km away from the provincial capital of Quetta.

Sources from Kharan, the closest district from Mashkel, told Xinhua that they have dispatched two buses of young volunteers to the quake-hit area for rescue and relief operation, but they cannot contact them yet, as all telecommunication towers fell down in the area.

Inter Service Public Relations said that they have directed concerned military units to start operation in the affected areas.

Meanwhile in Gawadar area of Balochistan, one man was killed in a land slide triggered by the earthquake.

In the country’s southern port city of Karachi, at least five people were injured as two buildings partially collapsed in the earthquake.

In Dera Ghazi Khan district of eastern Punjab province, three people were injured and five cattle died in land sliding triggered by the earthquake in the mountainous area.

The strong earthquake hit parts of Pakistan at 3:44 p.m. local time for about 20 to 25 seconds. Local Met office said that the epicenter was located on Pakistan-Iran border at the depth of 76 km.—IANS.