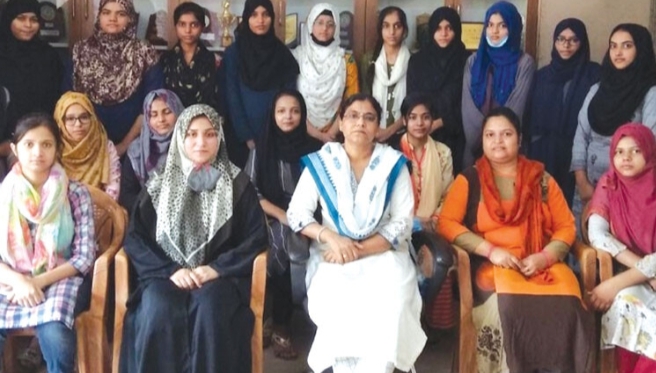 New Delhi : As many as 23 female students of a government school in Jamia Nagar had qualified NEET exam but 22 out of them were not fortunate enough to take admission in any medical institute.

The students told Muslim Mirror that they were not eligible to take admission in any government college as their scores were lower than cut-off ranks issued by the institutes.

However, they were eligible to take admission in private medical colleges but they couldn’t do so because they could not afford education fees mandated by them.

“We are from middle-class family. We cannot afford their fees,” said Madiha, one of the 22 students.

The students were enrolled in Sarvodaya Kanya Vidyalaya, Noor Nagar, Okhla, New Delhi. They are among 569 students of government schools in Delhi who have cleared NEET exam this year.

In October, Delhi ministers had praised the efforts of the NEET qualifiers. Deputy Chief Minister Manish Sisodia had categorically mentioned the Noor Nagar school for the remarkable performance of its students.

29 NEET pass outs are from a single Delhi govt school Molarband. 24 from another one in Yamuna vihar and 23 are from one in Noor nagar.

Jamia Cooperative Bank has come out to help these students get proper coaching and perform better in the next exam. The bank has selected top 10 students and paid their fees [Rs. 40,000 per student] to help them take admission in Aakash Institute. Adiba Ali, Shiza Ali, Bushra Midhat and Ariba are some of the lucky students who has got admission in Aakash with the support of the cooperative bank.

Moreover, Dr Shabana Nadim, former principal of the aforementioned school, has provided financial help to two more students to get coaching from Aakash.

The remaining students have also started preparation to appear for the next NEET exam. They are considering to take admissions in various coaching centres at their own, said Ms Sadaf Rais, one of the school teachers.