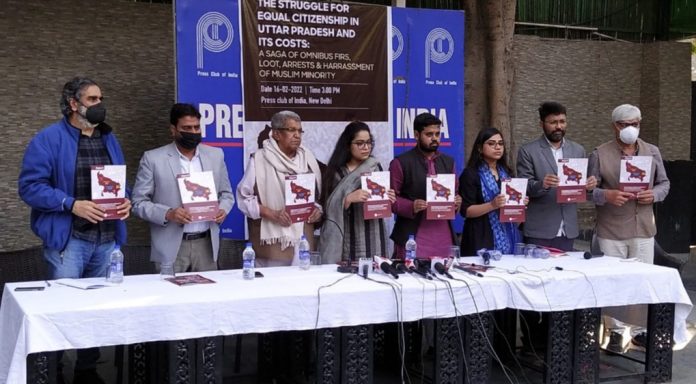 New Delhi:  Amidst the assembly election in Uttar Pradesh, rights group released a fact-finding report on the status of the victims of alleged police excesses during the anti-CAA (Citizenship Amendment Act) protests in Uttar Pradesh which claimed that the state machinery is in cahoots to deny justice to them.

The report, titled “The Struggle for Equal Citizenship in Uttar Pradesh and Its Costs: A Saga of Omnibus FIRs, Loot, Arrests, and Harassment of Muslim Minority,” drew attention to the nature and scale of the crackdown on democratic protests for equal citizenship in Uttar Pradesh, as well as the aftermath, in which 23 innocent people were killed by police gunfire, the largest number of deaths in any state throughout the nationwide demonstrations.

The victims alleged that state criminal justice machinery is working together not only to deny them justice, but also to inflict revenge on people who protested against the discriminatory amendment to the citizenship law in the BJP-ruled state in December 2019.  The report was released on Wednesday by the Association for Protection of Civil Rights (APCR) at Press Club of India here.

“There is an ongoing concerted effort by all the state bodies to not just deny justice to the survivors and victims’ but continue to extract ‘revenge’ and completely erase the battles of survival of Muslims and of civil society at large, from public memory,” said the report.

“After two years of the ghastly repression of the civil protest, there has been no attempt to either compensate the families of the dead, or to the survivors who suffered loss of limbs and property. There has not been any significant attempt to initiate impartial investigations into police atrocities against the protesters while the harassment of the protestors continues”.

“With the passage of Citizenship (Amendment) Act in 2019, the states all across India witnessed the unprecedented protests from people of all faiths, race, caste and creed opposing the discriminatory and arbitrary CAA legislation which if proceeded by the nationwide NRC and NPR as in Assam, threatens millions of Indian Muslims and throws the community into a citizenship crisis. As the massive protests erupted across leading to international scrutiny and criticism on this visibly discriminatory law, a violent crackdown to quell the protests was reported in many parts of the country. The heart of this crackdown was the state of Uttar Pradesh where the BJP-led government initiated unprecedented police brutality against the protestors resulting in the death of 23 innocent people”.

“The nation today is in the middle of the most serious crisis when all of its democratic institutions have come under attack in the last decade. Judiciary, media, election commission, parliamentary democracy all are being pushed to the wall. Fundamental rights of the people are being undermined by unforeseen might of the state apparatus. In this time of crisis, we as a civil and human rights advocacy group feel our responsibility to uphold the citizens’ rights guaranteed in the Indian constitution and the International Human Rights Law,” states the report.

According to the report, based on verified information in the public domain and accessing legal documents, an estimated 350 First Information Reports (FIRs) were registered regarding these protests against around 5000 named individuals and over 100,000 unknown persons, which gives a free license to the state police to implicate any person in these cases and subject him/her to unnecessary harassment without any fault. Our findings also concluded that about 3,000 people (dominantly Muslim) were illegally arrested without any due process of law under fabricated charges.

Out of them many are still languishing in the jails even after more than two years since the anti-CAA protests began. On the first call of all India protests against CAA and NRC on December 19 in the year 2019, the state administration intimidated around 3000 people with ‘caution’ notices to stop them from exercising their fundamental right to protest. On the same day around 3305 people were detained which rose to 5400 within two days and many were later implicated in the same FIRs as mentioned above. Over 500 recovery notices for the damages to the public property have been arbitrarily issued, without due legal process, across ten districts for damages worth an estimated Rs.3.55 crores which the Supreme Court recently termed as illegal and unconstitutional.

However, this does not reverse the torture and harassment they faced and after succumbing to it, some even ended up paying these unlawful fines. In the Kanpur district alone, around 15 families, mostly daily wagers, unaware of the due legal process even paid Rs 13, 476 each.

The report urged the state government to immediately release official data in the public domain regarding the number of FIRs filed, people arrested, detained, accused, bailed, and booked under stringent anti-terror laws and other draconian laws in connection with the anti-CAA protests, as well as the names of those who received recovery notices, properties attached, and auctioned if any. A full report on the status of all of these cases must be released by the administration. The state administration should promptly and unconditionally remove all falsified cases against more than 100,000 nonviolent anti-CAA demonstrators.

It also urged an immediate, impartial, and public court-supervised investigation into state repression that has resulted in extrajudicial deaths, torture, and other forms of state violence. Public officials and anyone who are found guilty of indulging in excesses must be held accountable according to the law. Any investigation into the violence that occurred during the anti-CAA protests must include claims that members of the ruling party were involved in inciting violence.

“We urge the state government for a comprehensive compensation package for the kith and kin of those who were killed in police action including those who have suffered temporary or permanent disabilities due to unjustified police action, “the report said in its recommendations.

it is high time for initiating an urgent dialogue at the national level, with citizens, parliamentarians, legal experts and activists towards repeal of draconian, unconstitutional, and undemocratic legislations such as Unlawful Activities Prevention Act, (UAPA), AFSPA, National Security Act (NSA), Sedition  that are being grossly (mis)used to quell fundamental rights of citizens in the country including the notorious Uttar Pradesh Prohibition of Unlawful Religious Conversion Ordinance, 2020 that has become an easy tool to incarcerate youths in the bogey religious conversions, the report suggested.

All of these go against several international conventions on human rights violations that India has ratified.

When asked about the timing of the release, Safoora said it is an opportune time to draw the attention of people and political parties which are contesting elections in UP.

No Muslim bodies came for our help: Kin of those killed in police firing during anti-CAA protests across UP

22 Muslims killed in UP police firing during CAA protests, but no FIR lodged even after two years