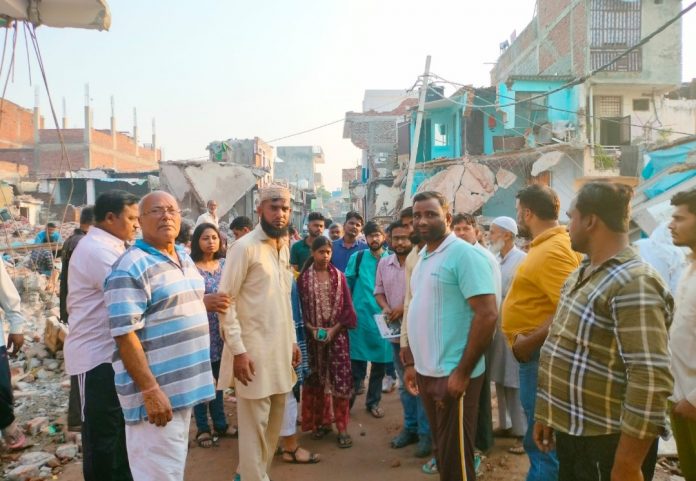 On Friday, 25 houses in a Muslim neighbourhood in Delhi’s Kharak Riwara Satbari region, were reportedly razed by the Delhi Development Authority and Delhi police.

According to a fact-finding team, the residents had gone to offer Friday prayers while the demolitions took place.

“In order to force the issue, the Delhi Police resorted to lathi charge injuring several people including women, and male policemen shamelessly manhandled the protesting women residents. The residents of the demolished houses were not even given time to rescue their household goods. The DDA officers have threatened to come back with bulldozers after Diwali and demolish more houses,” the fact-finding team said in a statement.

“The team noted that Delhi Police resorted to lathi charge injuring several people including women, & male policemen shamelessly manhandled the protesting women residents. The residents of the demolished houses were not even given time to rescue their household goods,” N Sai Balaji, the national president of AISA said.

According to reports, the police officers warned the locals that they would be subject to punishment similar to what Muslims in Uttar Pradesh had to endure.

Notably, MLA Kartar Singh of the Aam Aadmi Party (AAP) did not speak up on behalf of the locals.

Meanwhile, CPI ML (Liberation), has condemned the demolisions and the police action.

“CPI ML (Liberation) condemns the DDA’s refusal to serve any prior notice and thereby give the residents a chance to approach the court and seek a stay. We also condemn the brutal police action,” the party said.

The party also demanded that “there should be no further demolition without prior notice, due compensation should be given to the victims of this sudden demolition, and the guilty policemen should be punished.”