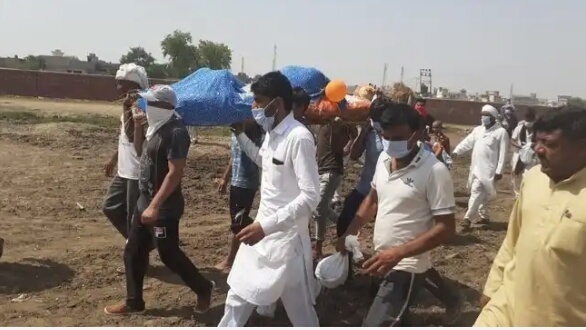 Satbir Ahlawat who is one of the persons who have converted to Hinduism said that after the death of his mother Phooli Devi, Muslim families of the village decided to convert to Hinduism and perform the deceased’s last rite as per Hindu customs as they lead their lives as per Hindu customs. However, before conversion, they used to perform last rites as per Muslim customs.

“In official documents, we are Doms who are Scheduled Caste [SC] Hindus. Barring cremation, we have been following the socio-religious activities of the Hindus,” he said.

Meanwhile, Muslim Welfare Organization state president Harfool Khan Bhatti said he knew about the Danoda Kalan village incident [wherein 35 persons converted to Hinduism] but did not have much information about Bithmara village. “The coversion of Danoda Kalan village happened to avail the benefit of the scheduled caste [SC] category as they belong to the Doom caste” he said.

Although Doom caste falls under the SC category, Muslims and Christians of this caste can’t claim the reservation benefit.
Bhatti also cited an example of Mohammad Siddiqui case. Siddiqui was elected as an MLA from the reserved seat of Ludhiana. When the matter reached to the Supreme Court, the MLA claimed that he is a Mazhabi Sikh.

Within two days, 11 Christians arrested and imprisoned under anti-conversion laws