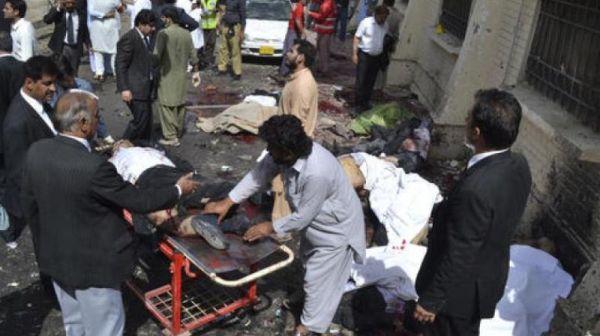 Quetta, Nov 12 : At least 30 people were killed and around 100 injured on Saturday in a bombing at a shrine in Pakistan’s Balochistan province.

The explosion took place at the Shah Norani shrine in Balochistan’s Lasbella district.

According to details, the blast occurred when “dhamaal” was taking place in the shrine.

He said the injured were being shifted to a hospital for medical treatment.

He said that more than 10 ambulances of Edhi foundation have reached the blast site and rescue efforts were underway, Geo News reported.

Lassi said that more than 500 people were in the shrine at the time of dhamaal.

Emergency services were facing problems in reaching the shrine due to its remote location and poor communication infrastructure. The shrine is also located in hilly terrain.

No group has yet claimed responsibility for the attack, Dawn News reported.

“People who are critically injured in the blast will be transported to Karachi,” said Balochistan Home Minister Mir Sarfaraz Ahmed Bugti.

Since no major hospital is located near the shrine, the injured are to be shifted to Karachi for further treatment. Many injured are being shifted in private vehicles.

The shrine is frequented by a large number of devotees on Friday, and is visited by people from across the country. Iranian nationals also frequent the shrine.

Sindh Chief Minister Murad Ali Shah has expressed his grief over the killing of innocents and condemned the blast.

The attack was carried out by Al-Alimi faction of the Lashkar-i-Jhangvi (LJ) militant group.

In August, a suicide bomber targeted the emergency services ward at Quetta’s Civil Hospital killing at least 70 people and leaving scores injured, majority of those killed were lawyers.