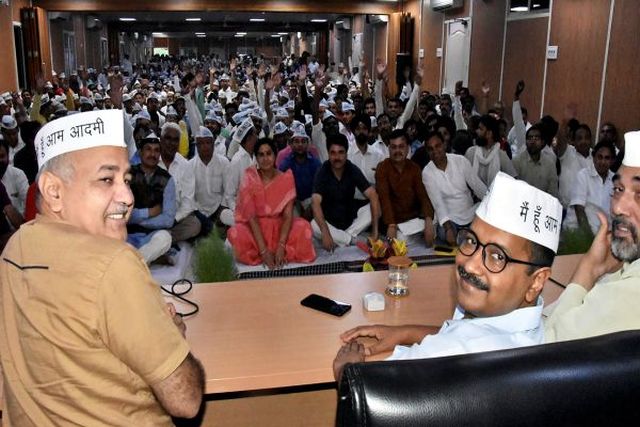 New Delhi : In a bid to ratchet up public support for its demand for full statehood to Delhi, the ruling Aam Aadmi Party (AAP) will hold 300 meetings in all municipal wards between June 17 and 24, the party’s Delhi Convener Gopal Rai said on Sunday.

The party will also hold a state-level workers’ convention on July 1 at the Indira Gandhi Indoor Stadium here to announce the party’s future steps on the demand.

The decision was taken at a meeting chaired by Chief Minister Arvind Kejriwal with ward-level AAP office-bearers and MLAs. The meeting was held to discuss the strategy on the issue, Rai said.

Speaking to the media after the meeting, Rai added: “When people in other states vote and pay taxes, the state is ruled by their elected governments. But, here in Delhi, despite voting and paying taxes, the Delhi government elected by them does not have any power. This is an insult to the Constitution of India.”

He claimed that the people of Delhi were unable to get their full rights even after 70 years of independence.

“In no state can a government come with more majority (than the AAP in Delhi). But even after that, the people here have to look at the Lt Governor for the smallest of works. This is an insult to the people of Delhi.”

Asked why the AAP was doing all this after enjoying power for three years, Rai said: “In the past three years, we have done every possible thing — from requesting to praying to the Home Ministry to the Lieutenant Governor. But as the speed of developmental works is slowed, we are forced to take this step.

The AAP leader said that the party is ready to share powers with the Centre.

“The reason for Delhi not accorded the status of a state is that it is the national capital. We are ready for the New Delhi Municipal Council areas under the Centre. But there are no embassies in Burari and Narela areas — why should people from these areas suffer even when there is no central government office in these areas?” Rai asked.

“In 1947, the country got freedom. Throughout the country, it was decided that people’s rule will replace the Viceroy’s rule. But in Delhi, the L-G was appointed in place of the Viceroy. The people of Delhi were cheated.”

“The problem we had with the British is that they took away all our gold and all our money to England. But what the Centre is doing with us is even worse — Delhi every year pays Rs 1.30 lakh crore as tax, but in return, Delhi gets nothing from the Centre.”

The AAP government had called a special Assembly session — which is scheduled to conclude on Monday now — to press its demand for full statehood to Delhi.

A resolution tabled in the Assembly would be passed and forwarded to the Centre, Rai said.