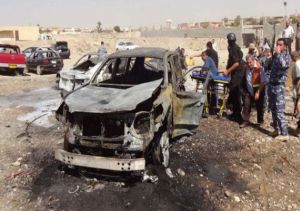 Baghdad, July 21 : At least 32 people were killed and 96 wounded in a string of car bomb attacks in the Iraqi capital city Saturday evening, an interior ministry source said.

The attacks were carried out when many people go out for shopping in the city’s popular markets or relax at coffee shops after the breaking of daily Ramadan fast.

In a separate incident, four people were killed, including a local leader of a government-backed Sahwa paramilitary group, in a car bomb explosion in al-Madain area, some 30 km from Baghdad, the source said.

On Friday, at least 24 people were killed and 77 wounded in a bomb blast during Friday prayers at a Sunni mosque in Iraq.—IANS.