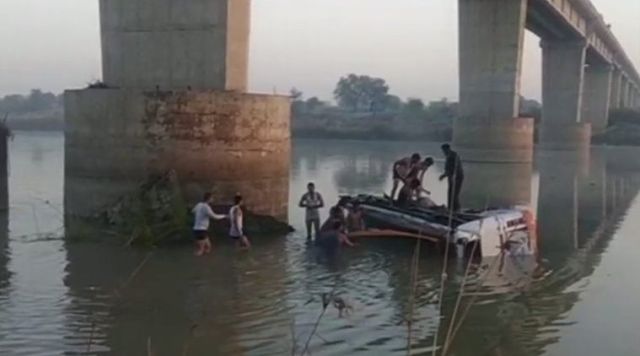 Jaipur : At least 33 persons were killed and around two dozen others injured when a bus carrying them fell in Banas river early Saturday morning in Sawai Madhopur district of Rajasthan, police and eyewitnesses said.

According to eyewitnesses, the driver, aged around 40, was overspeeding and trying to overtake another vehicle on the narrow bridge when he lost control with the bus plunging 100 feet into the river around 6.45 am near Dubi village.

Four children and seven women were among the 33 dead, whose bodies were sent to the district hospital mortuary. At the time of filing of the report, bodies of 25 dead had been identified and 19 of these handed over to their respective families.

The injured were rushed to a nearby hospital.

Earlier report stating that the bus was driven by a minor was dismissed by the police who said the vehicle’s conductor was physically challenged and hence could not possibly drive it.

Though fog was also mentioned as a cause of the accident, a police probe is in progress.

In Delhi, Prime Minister Narendra Modi condoled the deaths and said his thoughts were with the victims’ families. “Anguished by the bus accident in Rajasthan’s Sawai Madhopur district. My thoughts are with the families of the deceased. The state government is closely monitoring the situation, including rescue operations and providing all possible assistance to those affected,” Modi tweeted.

Chief Minister Vasundhara Raje Scindia also condoled the deaths and ordered quick action to rescue the injured. Authorities announced an ex gratia payment of Rs 2 lakh each for the bereaved families and Rs 50,000 each to the injured.

A team of the State Disaster Management and Relief Department and swimmers helped in rescuing the injured and bringing out the dead from the bus, which lay on its side on the river bed.

Health Minister Kalicharan Saraf said the injured would be taken care of on priority in hospitals.

Both government and private doctors are engaged in tending to the injured, said MLA Diya Kumari who was present at the spot.

Diya Kumari said the government would extend full support to the bereaved families and the injured. She said efforts would be made to build a concrete bridge at the accident spot.

58 pilgrims injured in UP road accident