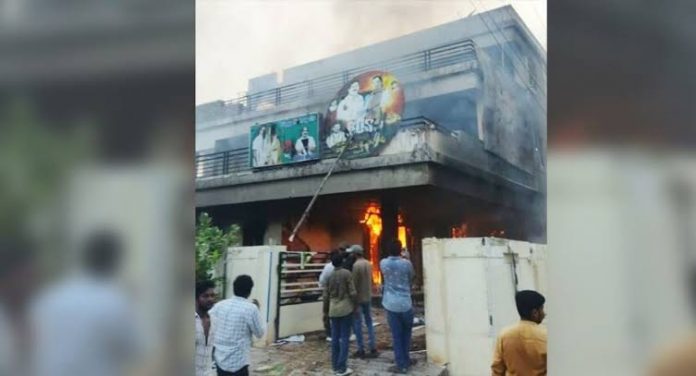 Amalapuram : The police in Amalapuram town of Andhra Pradesh have arrested 46 people in connection with Tuesday’s large-scale violence in which houses of a minister and MLA were set afire, a senior official said on Wednesday.

Police tightened the security with the deployment of additional forces called from various districts to prevent further flare-up amid reports of more groups planning protests in support of the government proposal to rename Konaseema district as Dr B.R. Ambedkar Konaseema district.

District headquarter Amalapuram was rocked by mob violence during the protest called by Konaseema Sadhana Samithi (KSS) on Tuesday to oppose renaming of the district.

The protesters indulged in violence at several places, pelting stones on police and setting fire to vehicles. They also torched the houses of state minister P.Viswaroop and Member of Legislative Assembly Satish. Dozens of people including policemen were injured in the violence.

Amid reports that the groups, which favour renaming of the district, are planning counter protests, additional forces were rushed to the violence-hit town to beef up security. Police have imposed prohibitory orders under section 144 of CrPC, banning meetings and rallies.

Buses coming to the town have been cancelled. Police were keeping a tight vigil on the roads leading to the town to prevent any possible protests. The mobile phone service, which was snapped to stop further spread of the violence on Tuesday, was yet to be fully restored.

Deputy Inspector General of Police (DIG), Eluru range, Pala Raju told the local media that the police have so far registered six cases and picked up 46 persons. “We have identified many persons involved in yesterday’s incidents with the help of CCTV footage and also the video recordings by the media and special branch. The process of rounding up them is on and we hope to complete it today,” the DIG said.

The official said the situation was now peaceful, but the police remained alert to prevent untoward incidents and ensure peace, especially in view of the ongoing intermediate exams.

He said the police spoke to the leaders of various groups and sought their cooperation in maintaining peace. The groups were urged to solve the problem amicably through talks. He appealed to the parents to counsel their children to remain indoors and abide by the law.

Hundreds of youth had participated in the protest called by the KSS on Tuesday. While police allowed a delegation to meet the district collector and submit the representation, a large number of protesters took to the streets and resorted to violence.

The Konaseema district was carved out from East Godavari with Amalapuram as its headquarters.

It was one of the 13 districts created on April 4, taking the total number of districts in the state to 26.

Following demands from various sections, the state government on May 18 issued a notification inviting objections and suggestions on the proposal to rename the Konaseema district after Dr Ambedkar. It sought suggestions and objections from the people residing within Konaseema.

People were urged to send objections and suggestions, if any, to Konaseema district collector within 30 days.

However, opposing the proposal KSS called for protest, which turned violent on Tuesday.— IANS