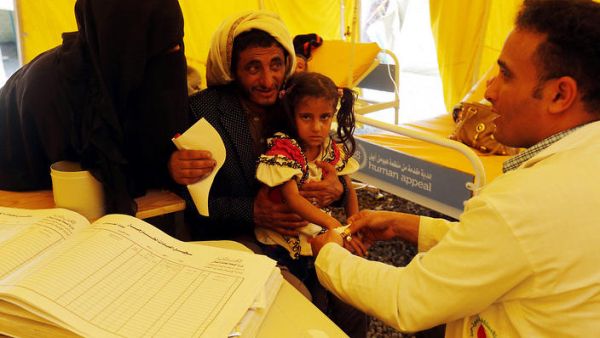 Sanaa : The International Committee of the Red Cross has warned that the current number of suspected cases of cholera in Yemen will at least double by the end of 2017 to reach 600,000 cases.

Maurer warned that the unprecedented outbreak of cholera was “alarming and growing”.

“The great tragedy is that this cholera outbreak is a preventable man-made humanitarian catastrophe,” he said.

Maurer pointed out that the cholera crisis came as a direct consequence of the conflict that has devastated Yemen’s civilian infrastructure and health system.

“I find this needless suffering absolutely infuriating. The world is sleep-walking into yet more tragedy,” Maurer added.

The World Health Organisation said on July 21 that it had already recorded 1,828 deaths since the outbreak in April.

ICRC spokeswoman in Sanaa Soumaya Beltifa told Efe on Sunday that the committee was attempting to negotiate with the parties involved in the Yemeni conflict to allow its members to have free access to regions they want to visit, in light of the blockade imposed by the Saudi Arabia-led Arab coalition on some areas.

More than three million people have fled their homes in Yemen since the outbreak of the ongoing conflict in September 2014, while over 20 million need humanitarian assistance across the Arab country, according to the Red Cross.

The war has also put the country on the verge of famine, a situation that can aggravate the danger of cholera because the outcome is usually more critical for malnourished people.