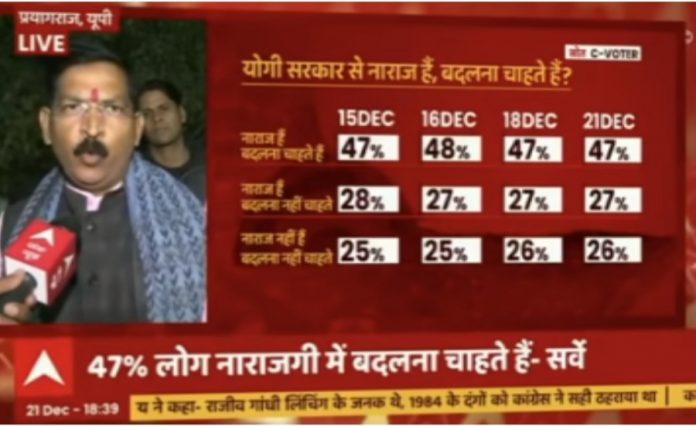 The alarm bells have long been tingling, and it’s only now to have become more visible, as survey after survey, from the past around six-months have conveyed a common echo that UP BJP CM Ajay Singh Bisht is slated to go on a long leave. This is despite the concocted and sponsored surveys, by most BJP affiliated mainstream media, but yet, sometime, it spills out on such media houses too. The latest survey to have hit, was done by C-Voter and aired on ABP on December 21, 2021.

This survey, on the mainstream media, which of course, has been hushed-out , and there hasn’t been any special-debate organized on it, has rattled the BJP prospects, and surely is giving sleepless nights to the BJP establishment, as it has been clear that 74% people from UP want AS Bisht to be out. The proverbial rug-from-beneath-the-feet has now been snatched. There can be no doubt left that BJP and its machinery is trying to scuttle the whole survey and there are efforts from behind the curtain, that the survey does not grab the headlines. Even the ABP anchor has called it as ‘alarm bells’ for the BJP.

When it was declared that 74% people were averse to AS Bisht, the intensity of the survey was therefore to be diluted, hence, the survey had to be divided, to make it become less relevant, as it was shown that 47% were angry with AS Bisht and want him-out and that 27% were angry but want to retain him and 26% were not angry and do not want him out. If 47% is added to 27% it makes 74%, but what would leave anyone perplexed as to what kind of people are those, who are angry but still want him in office? What a mockery of such a category? Is what the news channel has made. Should this innocence be attributed to the people of UP or to the channel to have overworked this formula? To anyhow give relief to BJP government and also in through its way earn some more brownie points. As nothing short of playing with emotions of people is what has been done. If some minor scrutiny is put to the survey, it also becomes clear, Naraz Hain ( angry ) etc as a part of the questionnaire has been deliberately written in a smaller font size. This is for the sake to somehow skip the viewers’ eye. Moreover, this survey may have just passed-away as a slide, but it is only social-media where it be being debated.

Perhaps, what is most questionable is why would anyone who is disgruntled would not let the government go? It is shameful that some media houses have stooped so extremely low in order to placate the government-in-office, that even people’s emotions have been thrown to the backburner. However, the ground realities from UP but resonate the same element as there are numerous examples of BJP so-called supporters, holding BJP flags and lauding RLD Chief Jayant Chaudhry and SP Chief Akhilesh Yadav, who both have entered into an alliance against BJP. The anger, however, is seamlessly available in all the rallies of PM Narendra Modi, HM Amit Shah, Defense Minister Rajnath Singh and the same was witnessed in the rally addressed by As Bisht in Prayagraj on December 26, 2021.

The political wind is right now, therefore, blowing against BJP, where Narendra Modi has visited around for five-times in the last fortnight, but the way it has embittered the farmers, who were forced to protest for around one year, fording the BJP to withdraw its anti-farmers laws, is most likely to find the worst-hit from what may be called as the agrarian belt, which is Western UP, where interestingly, Muslims are also in their largest numbers. In Eastern UP from where Modi himself is an MP ( Benarus) is also brimming with anti-BJP emotion, despite the Purvanchal Expressway and making of Kashi Vishwanath corridor and the efforts to communalize the issue, as people just are unable to forget the millions of dead bodies floating in river Ganga during the Covid-19 second wave. AS Bisht also comes from Gorakhpur-the same region.

The Central UP which has its capitol Lucknow has shown mammoth crowds of Brahmins, on January 2, at Gosainganj, where (late) Harishankar Tiwari, a political stalwart of Brahmins, sons Bhishm Shanker Tiwari and and Vinay Shanker Tiwari, Digvijay Narain, Girja Shanker Pandey-all political heavyweights, were present leaving their erstwhile parties and shared the SP platform with Akhilesh Yadav who offered tributes to the Brahmin icon Lord Parshuram. The region of Bundelkhand too had found an ‘ocean of people’ thronging the venue, where Akhilesh Yadav had conducted his Vijay Rath Yatra in Jhansi on December 3, 2021, and where all what BJP gave to people was a hollow advertisement of AS Bisht proclaiming a dam from Telengana ( AP) as that of Bundelkhand! Will it not be appropriate to recollect that in 2016, BJP Central government had sent water-tankers to the parched Bundelkhand which were empty! People of Bundelkhand have not at all forgotten that.

It is now becoming more and more clear, with each passing-day that lotus, the symbol of BJP, is wilting to BJP prospects. There are enough surveys now, which suggest, that for AS Bisht it is impossible to have a re-run at the office in 2022. Notwithstanding, to the now opened-up squabbles within BJP, where there is a growing sense of disillusionment about him, as even in the poster, on the occasion of Nishad Rally ( Backwards) in Lucknow on December 17, 2021, the photograph of AS Bisht was given a miss. After the rally Nishads came out heavily against BJP, Rajbhars have already abandoned BJP, Brahmins show their open disdain for BJP, Muslims, who make around 20 % of UP are en bloc against BJP, and now BJP itself is wary of AS Bisht.

It is only 2022 would tell as to what entails for AS Bisht and BJP?