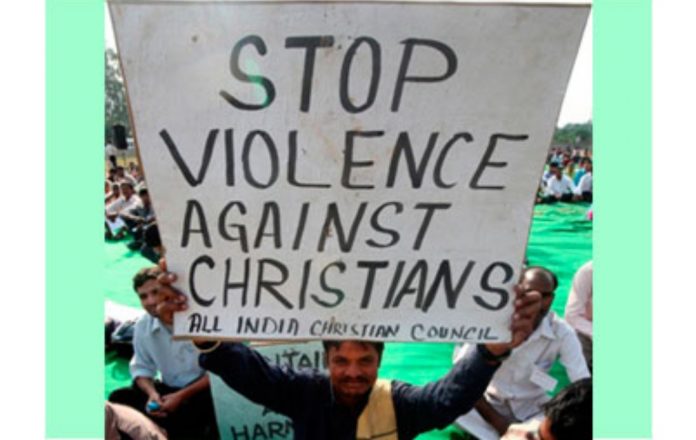 According to Federation of Indian American Christian Organisations of North America (FIACONA), it has documented at least 761 incidents of violence against Christians, including lynching and armed assaults last year.

The Federation has recommended U.S. and European governments to impose sanctions on officials who promote violence and exclusion of religious minorities.

John Prabhudoss, the chairman of FIACONA while addressing a press conference in Washington, D.C this week said, “The year 2021 has proven to be the most violent year for Christians in India.”

He said FIACONA documented and analysed all the 761 incidents, and that the number of anti-Christian attacks is likely to be much higher as most of the incidents go unreported.

In India Christians and other minorities do not trust the police, especially in rural areas, he said. “The current hostile environment in India amplifies that distrust.”

He said that as per the survey conducted by FIACONA in states ruled by Hindu nationalist Bharatiya Janata Party, 72% of Christians believe that the police will not protect their lives, liberty, property or their way of life.

As per the FIACONA’s report India’s judiciary is also not viewed as being independent and impartial.

The report stated, “The higher courts in India have been passing judgments favouring views of the political establishments rather than based on legal merits of the cases. Many recent judgments have made some wonder if the integrity of the high courts is compromised.”

It adds, “Common citizens of India, especially the religious minorities, observe and feel that the governments led by BJP are implementing the majoritarian ideology, namely ‘Hindutva.’”

“The government is subservient to the Rashtriya Swayamsevak Sangh, an umbrella Hindu nationalist group, and its “multiple associates specializing in radical and violent means to exclude and demean the Christians.”

While accusing some media outlets and social media giants of being aligned with Hindu nationalists that are inciting attacks on religious minorities and calling for genocide FIACONA stated, “Most major media houses both in print and TV are either controlled or owned by tycoons who are in league with the Hindu nationalist ecosystem and it is more visible in Hindi and some other vernacular media.”

The report also stated that India’s “anti-conversion” laws are used as a tool to arrest religious minorities, including Christians, on false charges of forced conversions.

The Overseas Friends of BJP USA, which is a registered outfit in the U.S. as a foreign agent under FARA regulations, is also an offshoot of the RSS “to provide a much needed support mechanism for their activities in India,” the report further noted.

“We recommend that India-based non-state actors and key officials that promote violence and exclusion of religious minorities from the society be identified and sanctioned by the United States and European governments,” it said.

According to another report released by the United Christian Forum (UCF) in India earlier this year recorded at least 486 violent incidents of Christian persecution in 2021.

The UCF also attributed the high incidence of Christian persecution to “impunity,” due to which “such mobs criminally threaten, physically assault people in prayer, before handing them over to the police on allegations of forcible conversions.”

As per UCF, out of 486 cases only 34 formal complaints were registered by police. “Often communal sloganeering is witnessed outside police stations, where the police stand as mute spectators.”

“Hindu extremists believe that all Indians should be Hindus and that the country should be rid of Christianity and Islam,” an Open Doors fact sheet explains. “They use extensive violence to achieve this goal, particularly targeting Christians from a Hindu background. Christians are accused of following a ‘foreign faith’ and blamed for bad luck in their communities.”

Despite lockdown, 135 cases of hate crime and  violence against Christians in India : Evangelical Commission