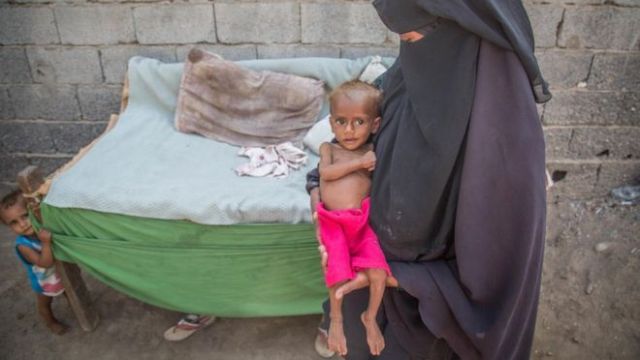 Sana : An estimated 85,000 children under the age of five may have died from acute malnutrition in three years of war in Yemen, a leading charity has said.

They suffered immensely as their vital organ functions slowed down and eventually stopped. Their immune systems were so weak they were more prone to infections with some too frail to even cry, Save the Children’s Yemen Director Tamer Kirolos said.

“For every child killed by bombs and bullets, dozens are starving to death and it’s entirely preventable. Parents witness their children waste away, unable to do anything,” the BBC quoted Kirolos as saying.

He warned that an estimated 150,000 children’s lives were endangered in Hudaydah with “a dramatic increase” in air strikes over the city in the last few weeks.

Save the Children said it based its figures on mortality rates for untreated cases of Severe Acute Malnutrition in under-fives from data compiled by the UN.

According to conservative estimates, it calculated that around 84,700 children may have died between April 2015 and October 2018, the BBC reported.

The charity said that based on historical studies, if acute malnutrition was left untreated, around 20-30 per cent of children would die each year.

Rising food prices and the falling value of the country’s currency as a result of a civil war are putting more families at risk of food insecurity, the UK-based charity said.

It also blamed a Saudi-led coalition’s imposed blockade for putting an increasing number at risk of famine, with continued heavy fighting around the principal lifeline port of Hudaydah further exacerbating the situation.

It is difficult to get an exact number of deaths, as many go unreported, aid workers in Yemen said. Only half of the country’s health facilities are functioning and many people are too poor to access the ones that remain open.

Trying to revive talks to end the three-year war which has caused the world’s worst humanitarian crisis, the UN warned in October that up to 14 million Yemenis are on the brink of famine, the BBC report added.

The fighting that escalated in 2015 after the Saudi-led coalition launched an air campaign against the Houthi rebel movement had forced President Abdrabbuh Mansour Hadi to flee abroad.

At least 6,800 civilians have been killed and 10,700 injured in the war, according to the UN, while 22 million people have been left in need of humanitarian aid, as it created the largest ever food security emergency leading to a cholera outbreak that affected 1.2 million people.