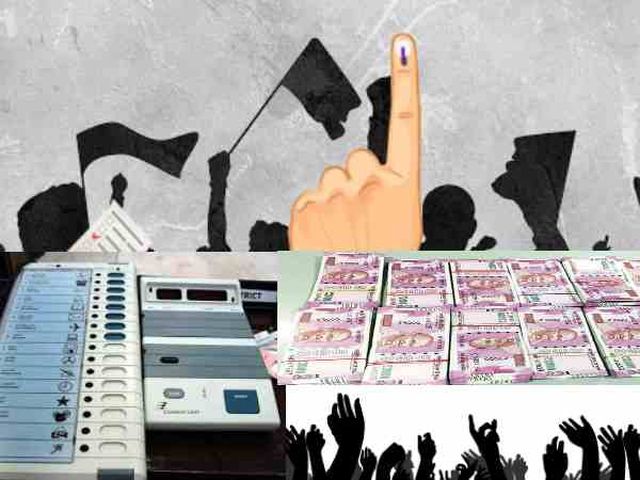 Bengaluru : Of the 2,654 candidates in the fray for the May 12 Karnataka Assembly elections, at least 883 are crorepatis and 645 have criminal cases against them, said two watchdogs after analysing their affidavits filed with the Election Commission (EC).

“The average assets of the 883 (35 per cent) crorepati candidates are worth Rs 7.54 crore. Of the 645 contestants, 254 (10 per cent) face serious criminal cases and 391 (15 per cent) face criminal cases,” revealed a study by the Karnataka Election Watch and Delhi-based Association for Democratic Reforms (ADR) ahead of the polls in the 223 constituencies across the state.

Of the 225-member lower house, including one nominated, election to the Jayanagar seat in the capital has been countermanded due tothe death of Bharatiya Janata Party (BJP) candidate B.N. Vijaya Kumar on May 4.

Of the total candidates, the watchdogs could not analyse details of 95 candidates belonging to national, regional, local and fringe parties, as their affidavits were badly scanned or were incomplete on the websites of the poll panel and the Chief Electoral Officer of the southern state.

Affidavits of all the contesting 223 BJP candidates were analysed. Two hundred and eight (93 per cent) of the 223 candidates in fray from the BJP have declared assets worth over Rs 1 crore, the highest number among all the parties contesting.

Of the total 1,090 Independents analysed, 108 (10 per cent) have declared criminal cases against themselves, and 70 (6 per cent) are accused of serious criminal charges.

The top three candidates with highest assets among all the candidates in fray belong to the ruling Congress — Priyakrishna, from Govindarajanagar constituency with Rs 1,020 crore worth total assets, N. Nagaraju from Hosakote Assembly seat with assets valued at Rs 1,015 crore and the state Energy Minister D.K. Shivakumar from Kanakapura segment with Rs 840 crore assets.

Polling will be held in a single phase on May 12 for the 223 constituencies, including 36 reserved for the Scheduled Castes and 15 for Scheduled Tribes.

The votes will be counted on May 15.