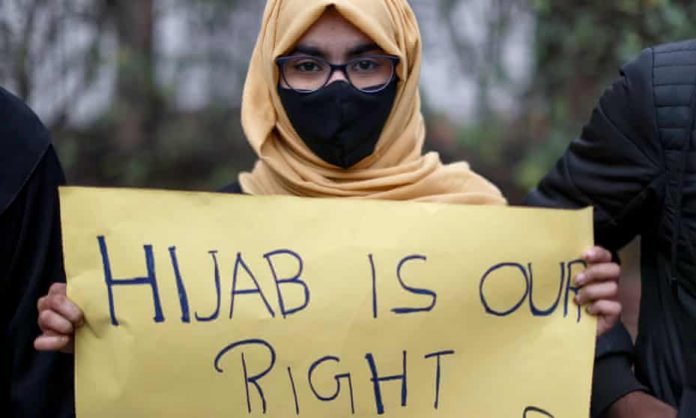 A large section of the educated Indian elite is hell-bent on proving that hijab is a regressive practice-one not mandated by religion but by patriarchy. I, a hijabi Muslim, am amazed to discover such a huge number of saviours for myself-each desperate to convince me I am oppressed and in need of being rescued from my father, brother, husband, and son. The controversy surrounding hijab has brought out a large gang of liberal elites-croaking like frogs during rain. But of all the hijabophobic opinion pieces I have read so far, it is Tavleen Singh’s “Look Behind the Hijab,” published in The Indian Express, that takes the crown.

In the articles she writes, “Women brought up in conservative Muslim homes are taught from the time they are small girls that veiling themselves is an act of piety and they should accept this unquestioningly. When this idea is taken to its logical conclusion, we get Afganistan, Iran, and the awful ISIS caliphate. When the caliphate was at the height of its power and glory, women could be shot in the street for showing their faces in public. “

It’s true that most of us are taught by example and practise the importance and virtue of covering up since we are small girls. That’s how we learn to respect our bodies, and that’s how we make sure that men don’t see us as objects of sexual pleasure but respect us for our intellect. Our men, since they are small boys, are taught to lower their gaze and not so much as touch a woman’s hand once they attain puberty. If girls are expected to accept the command of God unquestionably, so are the boys. No one, for example, seeks their permission before circumcising them.

There is so much else that we are taught in order to make us good Muslims. We are taught to respect and obey our parents, pay our Zakat, stand for the five prescribed prayers, stay away from bank interest (riba), not lie and steal, not indulge in illicit sexual acts, and be kind and generous. All of this we are taught since we are small children, irrespective of gender. And when these teachings reach their logical conclusion, the society gets upright, confident, resilient, and socially responsible women (and men).

It’s amazing how Tavleen Singh can see women in Afghanistan, Iran, and under the awful ISIS but can’t see those right around her. She cannot see Khalida Parveen, a hijabi social activist from Hyderabad who carried out full-scale relief work during the pandemic, Dr Farha Niloufer, a hijab-wearing paediatrician who contacted Covid while on duty and died a week after giving birth, or Uzma Fatima, a hijabi assistant engineer at Srisailam Power Station who died after saving four lives in the power station fire mishap.Tavleen Singh cannot even see the millions of not just hijabi but naqabi (veiled) doctors, lecturers, writers, scholars, engineers, social workers, scientists, artists, and entrepreneurs whose way of life is the logical conclusion of what they were taught as small girls. All Unfortunately, this deliberate myopia that Tavleen Singh and her ilk have condemned themselves to is untreatable and unmanageable.

I am unable to comprehend the point Tavleen is trying to make by giving the example of Afghanistan. The pitiable condition of Afghan women is due to the extreme poverty their country is reeling under and the decades of war it has witnessed. How Tavleen Singh seeks to blame the hijab in this case is genuinely beyond me. The next example she gives is of Iran, where women’s participation in the labour force is a whopping 49%, and 62.1% of women get to complete their secondary education. Compare it to global indices and you will find Iranian women doing better than their counterparts in most other countries. So once again, Tavleen’s example falls flat. As for ISIS, she is right that it was awful. And Tavleen Singh is not the pioneer in calling out the awfulness of ISIS. Islamic jurists and ulema world-wide have condemned ISIS and pointed out its illegitimacy. Muslims all over the world have disowned it in no uncertain terms. But once again, ISIS and all its awfulness was not the logical or illogical conclusion of small girls being taught to cover up. ISIS is one of the most un-Islamic things that have occurred on the face of the earth. But Tavleen Singh has long had an unhealthy obsession with associating every terrible thing with Islamic teachings, and of late, her Islamophobia has spun out of control.

Furthermore, she writes, “When the Prophet of Islam urged women to dress modestly, he may not have realised what modesty meant exactly would be determined by men.”
To set the record straight, the Prophet of Islam (PBUH) did not merely tell people what they were supposed to do. He showed how something had to be done with a practical example. Matters that pertained exclusively to women were practically implemented and exemplified by the female companions of the Prophet (PBUH).
This is what is called the sunnat. The Sunnat of the Prophet, or how he did things and asked his female companions to do things, is the most important source of guidance in Islamic matters after the Quran. For believers, the Prophet of Islam is the conveyer of the word of God. But since all my readers are not believers in Islam, let us look at it from a completely non-religious point of view. According to Tavleen Singh, the man who brought about the greatest and most long-lasting revolution in the history of mankind, who steered a nomadic civilization out of the depths of ignorance and caused a global moral revolution, may not have realised the simple fact that men have a natural tendency to want to dominate the narrative in all aspects of life! Well, he realised that very well and prescribed checks and balances and limits in every aspect of life, including hijab.
Further, Singh writes, “Islam has given the world some fine ideas about equality and brotherhood, but the treatment of women is not one of them.”
If I refute this ignorant and biassed statement with examples from the Quran and Sunnah, this article will turn into a book. It should suffice now that in Islam, paradise lies under the mother’s feet, the daughter is called a rehmat (blessing/mercy) of God on the parents, and the wife completes half the deen of her husband. Islam gives women the right to inherit with no obligation to spend on anyone. There is no concept of dowry in Islam, and the mehr is a right.
It’s interesting to note that the first person to convert to Islam was a woman-the rich, respected, and self-sufficient entrepreneur Khadija (RA) and the first person to be killed for accepting Islam, i.e., the first Muslim martyr, was also a woman-Sumayya (RA). Surely these brave and wise women knew better than Tavleen Singh the treatment accorded to women by Islam. And what they knew they had found was worth staking their social standing and lives for.
Tavleen Singh makes another ridiculous and baseless allegation against the girls protesting for their right to hijab.
She writes: “What worried me most was that the girls who were part of the original protests were being supported by the Campus Front of India, which is the student wing of the Popular Front of India.”
The date of this allegation by Tavleen Singh was February 13, 2022 (an Indian Express piece titled “Look Behind the Hijab”). A day later, on February 14, 2022, Tavleen Singh wrote an interrogative tweet:

“Is it true that the Udupi head of the Popular Front of India is the father of the girl who became a heroine for shouting Allah-o-akbar? Is it true that the girls who started the hijab protest also have links to this jihadist outfit? “

So Tavleen Singh, who on February 13th, 2022, was so sure and worried about hijab protesters and PFI links that she even wrote about it in her national level opinion piece on February 14, 2022, and took to Twitter to confirm if there was any truth to the protestors-PFI link rumor. How did she write about it in the Indian Express and how did the paper publish this claim when it was nothing more than rumour mongering? Tavleen Singh deserves to be stripped of her journalistic credentials for this baseless allegation alone. She lied with impunity and took her readers for a ride. The Indian Express is an equal party in making a circus of journalism.

The rest of the article is a lousy attempt by Tavleen Singh to prove that the protests for hijab are not spontaneous, but probably controlled and sponsored by the Popular Front of India. It surprised her how a small group of girls had accessed the Supreme Court without some heinous organisation backing them up. Tavleen Singh is probably not aware of the legal provisions that enable the commonest citizens of the country to knock at the gates of the Supreme Court. It is also hard for Singh to digest the fact that there are still people in the legal profession who care about the secular democratic values enshrined in the constitution and possess the courage it takes to take up a legal battle for the rights of girls.

I wonder if Tavleen Singh understands that an opinion piece differs from a fictional piece. The audacity and confidence with which she administers illogical takes never ceases to astound me.For the audacious claims made in this opinion piece, Tavleen Singh and the Indian Express both deserve to be dragged to the courts.

Why single out only Islamic symbol? asks NCHRO

Opinion: In Islam doing an entire purdah by Muslim women is an act of worship