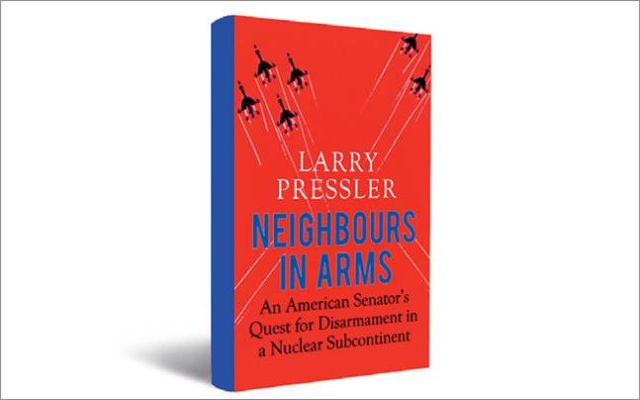 Could the North Korean nuclear issue, which is giving the world an anxious time due to the presence of hotheads on either side, the invasion of Iraq and its toxic fallout, and above all, the arms race in the teeming but impoverished South Asian subcontinent have been averted if a crucial piece of US legislation had been implemented honestly?

It is a tantalising “what if” scenario, especially for the prospect of a more peaceful South Asia, but it could have well worked, says the American lawmaker whose name became linked to an effective but short-lived effort towards this end — one which went on to make him revered in India, reviled in Pakistan and ended his political career.

“The US government had enough carrots and sticks to control the spread of nuclear weapons in the 1980s and the ’90s…. It is my contention that, if we had continued to apply the Pressler Amendment standards in the Indian subcontinent and elsewhere, the world would have been a much safer place, the Indian subcontinent would have been nuclear-free, and we would not have fought the Iraq war,” contends Senator Larry Pressler, author of the amendment that blocked US aid to Pakistan for five years in the early 1990s due to its clandestine nuclear efforts.

But, in his engaging memoir-cum-account of arms control/non-proliferation efforts-cum-analysis of the workings of the US government, he admits how much of a dim chance it was — given the challenging, deep-pocketed adversary he faced.

For working on all pistons to render his venture ineffective, or sidestep it, was a massive shadowy but most potent entity with a vested interest in ensuring conflict and tension so it could keep up its business of selling arms to one, or preferably, both parties.

It is this entity, the new military-industrial complex that Pressler terms the “Octopus”, and holds responsible for encouraging Pakistan to develop nuclear weapons. He also explains why succeeding US administrations — from Ronald Reagan to Barack Obama — have seemed fully oblivious of Pakistan’s duplicity and continued giving it military aid.

This entity’s activities also explain why the US and India, despite their landmark nuclear pact, have seen their relations only flourish in the military aspect, he says.

Identifying the “Octopus” as the present form of the “military-industrial complex” President Dwight D. Eisenhower had warned against in his farewell speech in 1959, Pressler seeks to explain how this multi-tentacled creature works in the “revolving door” reality of American politics and how it got its revenge on him in two elections nearly two decades apart.

While he tells in detail the story of his Amendment and its chequered history, how it was weakened and repealed, the “massive Octopus labyrinth that now controls the purse strings in Washington” and “the total control of lobbyists in Washington and, to some extent, in India”, he poses some pertinent questions about US relations with India and Pakistan.

Alongside, Pressler recounts his own singular story of rising from a humble background in South Dakota to become a Rhodes Scholar (where his contemporaries included Indian economist Montek Singh Ahluwalia and Pakistan politician and acting President Wasim Sajjad), and leaving Oxford’s cloisters to serve in the Vietnam War and finally his entry into politics — the first Vietnam vet to become a Senator.

From his political career, he provides some some unique insights into US’ non-proliferation efforts, both legislative executive, from Reagan to Bill Clinton, who not only wiped out the Pressler Amendment — and was rewarded with the 1998 N-tests — but also reneged on other promises.

And Pressler, who includes some evocative accounts of visits to a supportive India and hostile Pakistan (where his hosts ensured a remarkable episode to show his Amendment’s effects), makes his inclination towards the former clear.

Dwelling on the course of the US-India relationship over the last three decades, he gives his predictions for their nuclear pact’s future, and recommendations for a new “super US-India” alliance on the lines it has with Britain and Israel.

All this goes on to make this work not only the recollection of a promising venture scuttled and its reverberations, but also a roadmap for a more peaceable future — with the persisting challenges well marked out.

Whoever fires the first shot will be wiped out, warns China