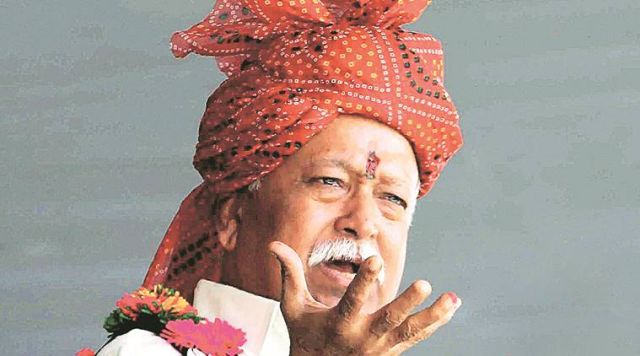 The Rashtriya Swayamsevak Sangh (RSS) and the Vishwa Hindu Parishad (VHP), the two “non-electables”, to use Finance Minister Arun Jaitley’s term, are among the Hindutva groups which are pushing for immediately starting the construction of the Ram temple in Ayodhya.

While the RSS chief, Mohan Bhagwat, has called upon the government to bring an ordinance to facilitate the work, a Bharatiya Janata Party (BJP) MP is introducing a private member’s bill in the Rajya Sabha on the subject, presumably to test the faith of all the Hindus, especially those who claim to be secular — such as those in the Congress.

The test will probably encompass the “nationalists” as well, including Muslims, Sikhs, Christians and other minorities, in the House.

Since the Narendra Modi government itself has not been noticeably proactive on the matter, the efforts of the RSS and others are apparently intended to create an atmosphere about the inevitability of the temple being built, which is expected to be electorally helpful to the BJP.

However, the government’s reticence does not mean that the RSS and the others do not enjoy the ruling party’s tacit support. But the government cannot but lie low because the matter is sub judice. If it joins the clamour for the temple, it may fall foul of the law.

At the same time, the government probably secretly welcomes the upping of the ante on the temple because it will divert attention from its inadequacies on the economic front, especially where the availability of jobs is concerned.

The government will also hope that if the cry for the temple becomes louder, it will push the controversies relating to the Central Bureau of Investigation (CBI) and the Reserve Bank of India, which haven’t shown the government in a favourable light, out of the front pages of newspapers.

But it also cannot be unaware that it is playing a dangerous game, for any raising of the communal temperature carries the possibility of riots or create a tension-ridden atmosphere which will deter investors despite the improvement in the ease of doing business index from 100 to 77.

What is more, the risks of raising the temple pitch may not be as electorally effective as the Sangh parivar believes because it is now widely recognised that religiosity does not have as much to do with the issue as politics.

It is for this reason that the temple did not figure in the BJP’s electoral campaign in 2014. Moreover, the party’s success was based on the secular plank of development for all enunciated by the “sabka saath, sabka vikas” slogan. A return to the temple, therefore, is a virtual admission that the “sabka saath” endeavours have not worked.

However, for the RSS and the VHP, who do not have to contest elections, and have a single-minded focus on ushering in a Hindu rashtra — a nation of, by and for Hindus — it is apparently now or never. They appear to have realised that this will be their last chance in a long while of building a temple of their dreams because the BJP may not secure a majority of its own in the Lok Sabha in 2019 although the alliance led by it may do so.

If that happens, as seems likely, it will be extremely difficult to enact a law for constructing the temple because not all of the BJP’s allies — the Janata Dal-United, for instance — will not be eager to support it for fear of alienating the Muslims. The BJP’s weakened position will also prevent it from asserting itself.

It has been argued that the BJP raises the temple issue — or allows it to be raised — before every major election to consolidate the Hindu vote. Since the party has never been as politically strong as at present, the belief in the saffron brotherhood apparently was that all that was needed was one final concerted effort.

The party also expected a favourable verdict from the Supreme Court, enabling it to “sweep” the elections, as BJP MP Subramanian Swamy said. However, the court’s decision to defer the hearings till next year has disappointed the Hindutva camp.

It was already unhappy with the apex court on several counts, including the verdict allowing women of all ages to enter the Sabarimala temple in Kerala when “tradition” prohibits the women of a reproductive age from being in the temple precincts.

On the Ayodhya temple, too, the saffron lobby used to say during the Ramjanmabhoomi movement in the 1990s that the courts can have no say in a matter of faith. After its ascent to power, the BJP has softened its stance on Ayodhya (though not on Sabarimala), but the RSS and VHP are not willing to wait for a judicial pronouncement.

It is obviously a tightrope walk for the BJP between constitutionalism represented by the judiciary and its belief that the Ram temple is the “soul” of India. Since the BJP has been engaged in this balancing act ever since the temple issue was raised in the party’s Palanpur resolution in Gujarat in 1989, the latest initiatives are probably no more than a new chapter in an ongoing saga.

In Geeta God himself says He created caste, Bhagwat is wrong : Avimukteshwaranand Saraswati