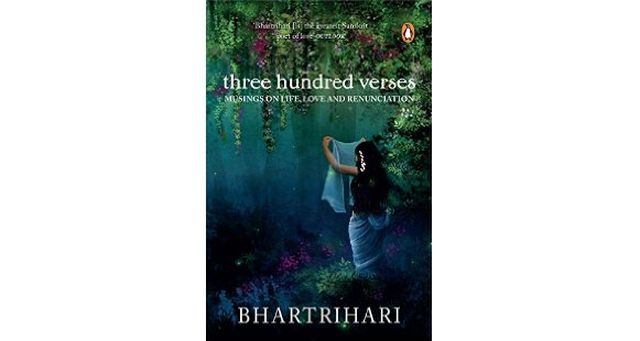 The profane and the sacred (or philosophical) do not need necessarily have to be exclusive of each other, for they can well exist in the same entity, though with some temporal intervals. See this ancient Indian poet skillfully sketching facets of human existence and purpose, lingering lyrically over love and beauty, and enthusiastically extolling benefits of aloofness from the world – within one work.

Bhartrihari had verse for all moods and occasions. Whether it was advice: “Keep away from a wicked person/though with learning ornamented;/a snake embellished with a gem/can it still not be dangerous”; or love’s complications: “Sweet girl. What is this singular/archery you display?/Not with arrows you pierce hearts,/but with the bowstring of your way”; or getting fed up of society: “My hands the cup, my clothes the sky,/alone, at peace, of longings free,/able to renounce the world,/when will I, O Shambhu, be?”

And in this new, evocative but accessible translation of “Shataka Trayam”/”Trishati” — not only his most well-known work or of Sanskrit but among the Indian subcontinent’s most famous — diplomat-turned-classicist A.N.D. Haksar presents this mysterious poet’s superb verse in “contemporary language for modern-day readers”.

On how the poet whose details are hazy save for that he lived around the 5th century A.D. (and is, among other theories, said to be King Vikramaditya’s elder brother who had renounced the throne) still strike a chord with modern audiences, Haksar maintains it is due to his craft and themes that he is still relevant.

Haksar begins with an account of the “Shataka Trayam” and its popularity — evinced by its 3,000 manuscripts available around India as per noted scholar (of the Marxist bent) D.D. Kosambi — and its appeal to translators from not only English, but also French and German and including Sri Aurobindo. What we know about Bhartrihari before coming to the poems, drawn mainly from Kosambi’s 1946 work as well as the 18th century compilation of scholar Ramchandra Budhendra which Kosambi had praised.

As said, they are mainly divided into themes of Life, Love and Renunciation with a few scattered examples in a prologue and epilogue. And Bhartrihari grows on you, with his sheer imagery, the width of his inspiration, and command over language.

Take from the prologue, one reminiscent of the “Gayatri Mantra” and another seeming an inspiration for/from “Vasudhaiva Kutumbakam”, before coming to “Niti”, which deals, among others, with fools/the knowledgeable, the wicked/good, character, fate, action or wealth (“There are three paths for money,/donation, pleasure, going waste:/when neither given, nor enjoyed/it follows the pathway third”).

“Shringara Shakta” is the highlight with Bhartrihari no prude in describing physical attributes or love-making, generous in commending beauty and displaying great knowledge of the female psyche: “Clever raising of the brows,/sidelong looks from half-closed eyes,/tender words with hesitant laughter,/and gracefully to move and stand:/all these are women’s ornaments/and also their weaponry” or “These poets have contrary minds/who always call a woman ‘weak’;/for women, with their flashing glances,/vanquish even Indra and the rest….”

The final is somewhat sombre, as it deals with cravings that are never satisfied (“We do not enjoy pleasures,/we are by them consumed…”), difficulties in detachment, the transient nature of pleasure, time’s ravages (“.. like a crow scrounging crumbs of others,/my time just passed away”), and so on.

In turns pensive and playful, the poems always remains a delight to read and savour in this translation by Haksar which echoes Omar Khayyam, the ghazal motif of ‘shama-e-parwana’ and many others from differing traditions. They also paint an engaging picture of ancient India, as well as a possibility of Sanskrit remaining a living language if it had not been diverted into abstract thought and rituals.