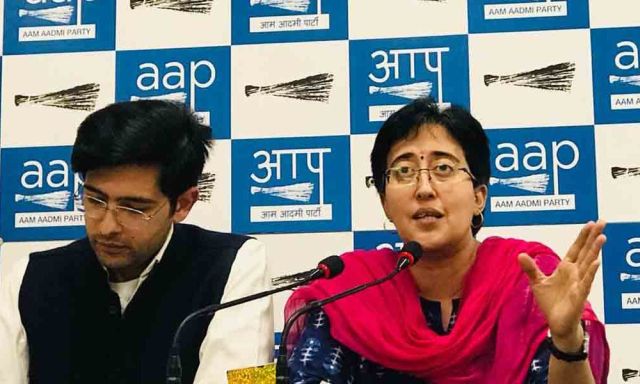 Addressing a press conference at the party office here on Saturday, AAP leaders Raghav Chadha and Atishi said it is shocking abuse of power as Delhi Police failed to register FIR against BJP Delhi chief despite video graphic evidence of him instigating a mob, assaulting police officers on duty and trying to sabotage a public event in a premeditated attack during the inauguration of Delhi’s Signature Bridge on November 4, 2018.

“ Shocking state of affairs in Delhi Police as not only has the police failed to lodge an FIR against BJP leader Manoj Tiwari despite video graphic evidence of him instigating a mob, assaulting police officers on duty and trying to sabotage a public event in a premeditated attack, they have instead filed an FIR against Delhi Chief Minister Arvind Kejriwal.”

In the most shameless act by Delhi Police, not only have they not lodged a complaint against Tiwari, they have instead lodged an FIR against Kejriwal based on an email sent by Tiwari by blinding pasting the sections as mentioned by him according to his will, Chadha said.

He said a delegation led by AAP Rajya Sabha MP ND Gupta, MLA Sanjeev Jha and Chadha met the Police Commissioner to lodge a written complaint against Tiwari. The delegation asked the police as to why they had not yet lodged an FIR despite video graphic evidence against BJP leader.

In a shocking reply, the Commissioner said that it was unclear from the video whether Tiwari was assaulting or was it accidental due to pushing among the crowd, Chadha said and added that the respective police officers who have been seen getting assaulted have given their statements that they were in fact not manhandled by the BJP leader.

He asserted that there is no doubt that the violence and ruckus created at the inauguration of the Signature Bridge was a premeditated attack as on the day of the event, Manoj Tiwari and accompanying mob arrived at the venue early, surrounded the stage from all sides, started vandalizing the hoardings, started sloganeering and create a climate of fear and physically attacked ACP and DCP level police officers on duty.

When Chief Minister Kejriwal and his council of ministers came on the stage, the hoodlooms accompanying Tiwari started sloganeering and throwing bottles and ink onto the stage, he said.

He said that it appears as though under BJP rule, police officers have started “wearing khaki pants under their uniforms”.

“AAP is determined to expose this premeditated conspiracy and threat to life of Kejriwal by Tiwari”, said Chadha

Adding to that, AAP leader Atishi said,” It is to be seen now if Delhi Police will lodge an FIR against Manoj Tiwari and his mob against whom there is video graphic evidence of clear intent of violence or will it be swift in acting upon to its political master’s orders and file and FIR against Amanataulla Khan who acted in defense and against Arvind Kejriwal who was in fact the victim”.

Both leaders reminded that more than a dozen ‘fake’ cases against AAP leaders have fallen flat on their faces and the courts have reprimanded the Delhi police for motivated cases against AAP.

They expressed the hope that the latest FIR will face the same fate and find its way to the trash cap.

Chadha also recalled that the Delhi government gave compensation of Rs 1crore the family of any police officer who loses his life in line of duty, on the other hand BJP hood looms and leaders insult, assault and throw punches at senior police officers and enjoy impunity.

“If the police department won’t even stand by its own people in order to safeguard BJP interests, how can the common man expect any justice? Police have fallen so low that they are acting like a front runner for BJP’s agenda.”