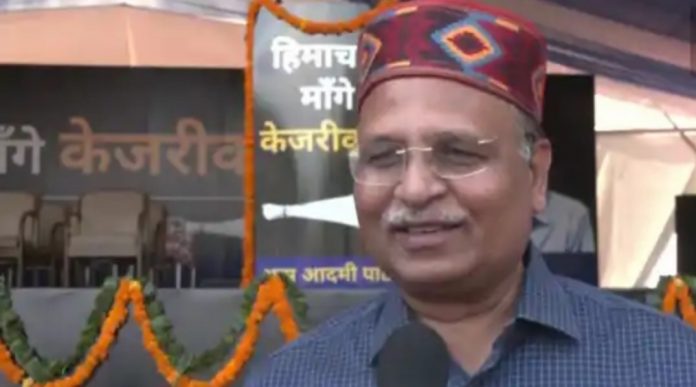 The Aam Aadmi Party (AAP) on Saturday said that it will induct ground-level leaders from the Bharatiya Janata Party (BJP) and the Congress in Himachal Pradesh, which will go to polls later this year.

AAP has intensified its campaign in Himachal Pradesh, which is being ruled by the BJP, after recording a profuse victory in neighbouring Punjab.

As the polls are just months aways, political leaders have started preparations for them. The BJP and AAP have started inducting leaders from each other’s party.

Earlier this month, nearly two dozen BJP leaders joined the AAP in Kangra. The ruling party also has inducted leaders from the AAP.

AAP leader Satyendar Jain today said that his party is inducting many ground-level workers from the BJP and Congress.

“Only top leaders of BJP and Congress will remain and the rest we will clear. We are doing background checks and will only take good people. AAP will work honestly in Himachal Pradesh,” he said.

Jain’s statement came hours after Kejriwal’s planned rally in Kangra. This is his second visit to Himachal in recent times.

While talking about Kejriwal’s visit, Himachal Chief Minister and BJP leader Jai Ram Thakur on Friday said that the Delhi CM was trying to put efforts for his party but such visits will continue till the polls.

He added that the people of Himachal have not given respect to a third party ever. “So the BJP will definitely come to power in Himachal Pradesh,” he said.