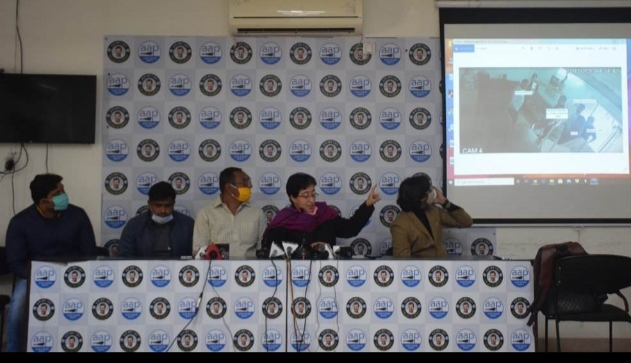 New Delhi:   Aam Aadmi Party (AAP) on Tuesday alleged that Bharatiya Janata Party has become “Bharatiya Ghoonda Party” as what is said that ‘Delhi BJP leaders and supporters are continuously attacking the AAP ministers, functionaries and supporters”. The party asked Prime Minister and Home Minister to whether they support such “ghoonda gardi or not”.

Referring to the latest incident of assault on a contractor by BJP workers in Okhla phase 1 area for extortion, senior AAP leader and MLA, Atishi said that BJP is becoming ‘Bharatiya Ghoonda Party’ while alleging that  Delhi police not taking any action.  She said that BJP ‘goons’ have assaulted contractor Sudhir Bidhuri over extortion in the parking of Okhla Phase I, the whole incident was captured in CCTV camera, yet police have not registered an FIR.

Addressing a press conference, she said that the nephew of BJP MP Ramesh Bidhuri ‘first threatened’ an AAP worker and then allegedly broke his hand for protesting outside MP Bidhuri’s house. She accused the son and nephew of BJP MP Bidhuri of running massive extortions in the area while blaming the police for not taking any actions against culprits.

She also underlined that the BJP is in power at the Centre and also at the MCD.

Earlier, she noted that BJP leaders and supporters vandalised the residence of Chief Minister Arvind Kejriwal and broke the CCTV cameras outside his residence but no action was taken against them. Two days after this incident the BJP supporters entered the house of Delhi‘s Deputy Chief Minister and vandalised his house.

First, they said that they will hold a protest outside the deputy CM residence but they broke into his house with the help of Delhi Police and vandalised his house, she added.

After this, a couple of days back, the BJP supporters under its Delhi unit chief Adesh Gupta ransacked the Delhi Jal Board office,

She presented AAP supporter Jitu Saini from  Tughlakabad constituency who  was threatened by Manish Bidhuri, nephew of BJP MP for holding a dharna outside his residence.

“Manish threatened Saini by saying how can he show the courage to protest outside the residence of Bidhuri. Thereafter, he came to Saini’s house along with BJP goons and beat him up and broke his hand”.

“It has been 48 hours but the Delhi police have not registered any case against the BJP leaders, she said.

“Emboldened by police inaction, on the same day, Himanshu son of BJP MP Bidhuri and Manish have beaten up Sudhir Bidhuri. The reason behind this attack is not only political enmity but also the financial extortion by the BJP leaders,” Atishi said.

When Sudhir denied, then the BJP ghoondas entered his office and tortured him. The footage of his office clearly shows that this attack was done by the family members of Ramesh Bidhuri, she said.