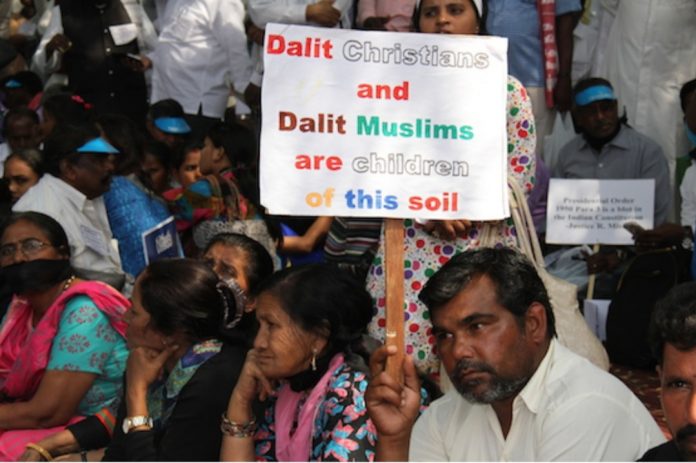 Hyderabad:  At an event here on Wednesday, leaders from Muslim, Dalits,  tribal communities in unanimously  spoke out against the BJP government’s plan to turn India into a “Hindu Rashtra” and demanded that the idea be abandoned right now. They claimed that such a choice would lead to the country’s fragmentation.

The  conference held under the banner of the All-India Dalit Muslim Adivasi Progressive Front (AIDMAPF) called on all marginalised groups to unite on a common platform to ensure justice and equality.  They said the TRS government  was elected on the promise of social justice and equality, but  it has failed miserably to give the same to the 40 percent of the people who are dalits, Muslims, SCs, and STs.

AIDMAPF’s founder, A M Shoeb, described the organisation as apolitical. Its main goal was to raise awareness among dalits, Muslims, SCs, and STs about the importance of working together to achieve socioeconomic and political power. The most backward of the BCs were also enlisted to help make it a powerful army. “We are not fighting any party; we are fighting for our fair share of power in relation to our population,” Shoeb remarked.

In a democracy, no one caste could dominate the country, according to BAMCEF’s Dr. A Kumar. In India, however, Brahmins, who made up only 3% of the population, dominated Parliament, the judiciary, the bureaucracy, and the media. He demanded that electronic voting machines (EVMs) be banned from use in elections because they may be abused. Dr Kumar went on to say that the Supreme Court has raised reservations about them.

Dayanand, the BSP’s state vice-president, said that for justice and equality to be achieved, Dalits, Muslims, and Adivasis must work together. In Uttar Pradesh, he recalled the BSP allocating 100 seats to Muslims and BCs.

Among those who addressed the programme were Jilekara Srinivas, Abrar Husain, Ranga Rao, Dhanalakshmi, Aiyaz Ali and Abdul Majeed of Jamaat-e-Islami Hind.

The conference opposed plans to amend the Constitution and privatize public sector units in the country, with slogans such as ‘Jai Bheem-Jai Meem’ and ‘Vote hamara, raj tumhara nahin chalega’. Proportional representation in all legislative bodies, as well as reservation in the private sector, was sought through a resolution. The gathering also passed a resolution calling for an end to persecution of minorities, including SCs and STs.