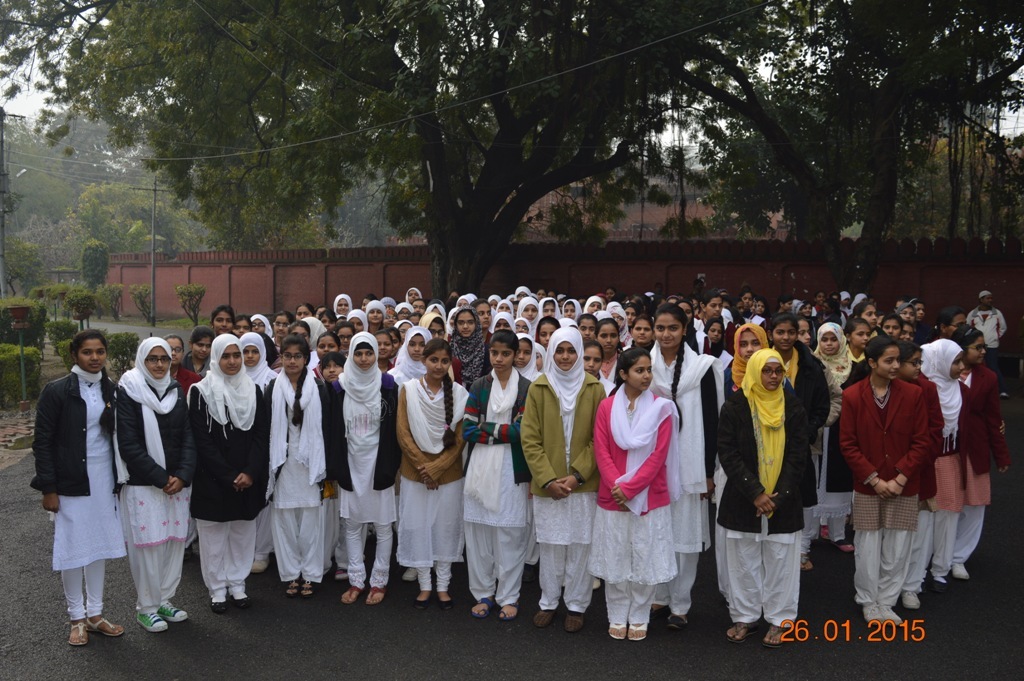 From the day of existence of human being the history is witnessing that the women has been fighting for her existence, for her rights, for her development, for her freedom, for her survival, for her amelioration, for her stratum, for her dignity, for her education. It is not the fight between male and female but it is a war of rulers and subjects where it is specifically mentioned by the theories of Karl Marx and Lenin. A world has been created where rulers ruled on various basis of religion, caste, colour, creed, sex, place of birth etc but India is only the Land where equality prevails and the rule of law is to create equality of opportunity for the unequal’s.

Article 29(1) of Constitution of India states that “Any section of the citizens residing in the territory of India or any part thereof having a distinct language, script or culture of its own shall have the right to conserve the same” it implies that Aligarh Muslim University has the right to get a constitutional recognition for preserving the rights of Minority. As per the submissions of Attorney General Mukul Rohatgi for denying Minority status to AMU is a regressive manifesto which will hamper the growth of Women Empowerment as the Muslim Community is already socially and educationally backward. Article Article 15(4) of Constitution of India provides reservation for such socially and educationally backward classes because a positive discrimination enhances the growth of nation because it is a social justice to marginalized and underprivileged class which needs to be strengthening for obtaining the objectives of Supreme Constitution. Although state is a welfare state as contained in directive principles of State policy. Dr.B.R Ambedkar rightly said that directive principles are the “heart and soul of Constitution” that cannot be snatched from any individual or any minority.

Intention for the Establishment of AMU for Women education

Sir Syed Ahmad Khan (founder) of AMU established Anglo-Oriental College in 1877 with the aim to enlighten Muslim Men and Women with the light of education because western education and Islamic philosophy is only the medium for amelioration of the plight of Muslims. In his continued struggle for education he understood the importance of women education and started Aligarh Movement for the Muslim Women Education therefore, the Mahatma Gandhi called him as the Prophet of Education because he introduced the system of education in that era where women was behind the veil and she was only an obedient subject to serve the Patriarchal system in the name of religion.

Sir Syed Ahmad Khan understood the plight of Muslims which endorsed the revolution where he understood the spirit of Al-Quran where it is mentioned that Men and Women must obtain education but the boundaries of education which were created by the hegemonies of Muslim Preachers (Mullahs) for Muslim Women has been ratified by the Sir Syed Ahmad Khan. For empowering women a special issue of Aligarh Monthly was published for women in 1903 later on developed a Female Education Association was created where initially 17 Girls were enrolled in 1906 to transpire the community to attain the Intellectual, Political and Economic objective of equality.

It is evident that Muslim students especially girls hardly attain education as the level of education is the product of means meaning thereby Muslims Girls are lagging behind in Education due to poverty.AMU is only the Institution in the Country which stands as a boon for the education of Women where almost 35-40% Female students are enrolled in AMU. It is enshrined in the Constitution of India to provide “dignified existence” to the Women under Article 21 of Constitution where education is one of the component of it because education is only the tool to fight the progeny of patriarchal system.

Impact of Minority Character of AMU and post-constitutional laws

Minority status is the culminating stone for producing Intellectuals in the Society with the weapon of Education for the upliftment of Muslim Community. In 1920 this University was created with the clear objective to promote education for Muslims but the post Constitutional amendments targets the “minority character” of AMU. It is a question of doubt whether the establishment of AMU is in consonance with Article 13,Article 14 and Article 29 and Article 30 of our Constitution?

There are various Acts which are applicable during British period but still operated in the territory of India e.g. Indian Penal Code 1860,Criminal Procedure Code 1973,Transfer of Property Act,1872,Indian Contract Act 1872 and there various others Act which are implemented prospectively after the enactment of Constitution of India in 1950.However, they were applied during the reign of Britishers but no Court challenge its validity or challenged its intention for regulation than why the AMU Act has been challenged for the establishment of AMU.

A positive discrimination to attain equality to empower Muslim Women

It is astonishing for me that the beautiful example of plurality of distinct religion, caste, races, culture is our India .The Constitution grants right to equality for all the Citizens of India where peculiar insertion of 42nd Amendment in 1976 extended the spirit that state does not owe any loyalty to any particular religion. This Peculiarity makes India renowned in this world for its distinctness. However, there is constant effort to promote the equality, Integrity among the multi-religious, multi-cultural and multi-lingual land through the Parliament and Judiciary therefore, we wish for the promotion of marginalized where the Muslims are least literate among the minorities in India which needs special provisions for their amelioration. It is also true that when we teach a woman we teach a generation.

The minority character of AMU signifies the notion of development and Women is the mirror of Muslim community.AMU is the only Institution in India of Muslim Women Empowerment and the abrogation of Muslim Minority character of AMU will defy the Muslim Women Empowerment as the Sir Syed Ahmad Khan rightly said about women education as “From the seed which we sow today, there may spring up a mighty tree, whose branches, like those of banyan of the soil, shall in their turn strike firm roots into the earth ,and themselves send forth new and vigorous saplings.”