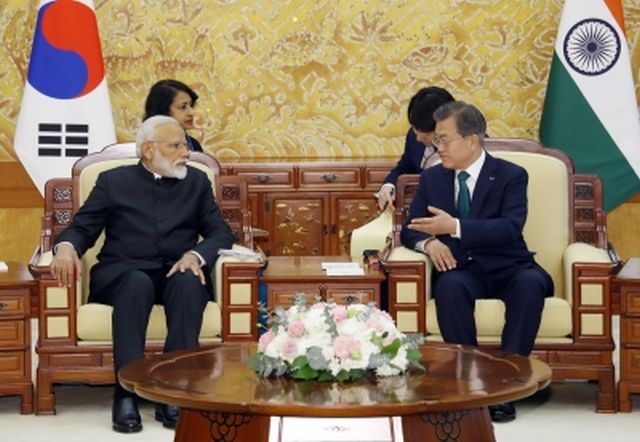 Seoul : Prime Minister Narendra Modi on Friday said here that the time has come for the global community to “come together” and “go beyond words” to act against terrorism, as he expressed his gratitude for South Korea’s support in the wake of the Pulwama attack.

Addressing the media on the second day of his two-day visit after his talks with South Korean President Moon Jae-in, Modi said: “I express my gratitude to President Moon for his condolences on Pulwama attack last week and his support against terror.”

“Time has come for the global community to come together and go beyond words to act against terrorism,” he said.

At least 40 Central Reserve Police Force (CRPF) troopers were killed in the worst-ever terror attack in Jammu and Kashmir since militancy hit the state in 1989. A Jaish-e-Mohammad operative on February 14 rammed an explosive laden SUV into a CRPF bus on the Jammu-Srinagar highway in Pulwama.

Modi said both New Delhi and Seoul are committed to strengthen their mutual and global cooperation to combat terrorism.

He said the defence sector is an important part of the country’s growing partnership with South Korea. “And induction of K-9 Vajra artillery gun in Indian Army ia an example of this friendship.

“To increase cooperation with South Korea in the defence sector, we have agreed to make a roadmap for defence technology and co-production,” he said.

He also welcomed the partnership of South Korean companies in the defence industrial corridors being built.

The bilateral relations between the two nations have reached new heights, he said, adding that the special strategic partnership that New Delhi-Seoul shares is “very significant” even for the world.

Modi is on two-day visit to South Korea. Later in the day, he will be accorded with the Seoul Peace Prize.