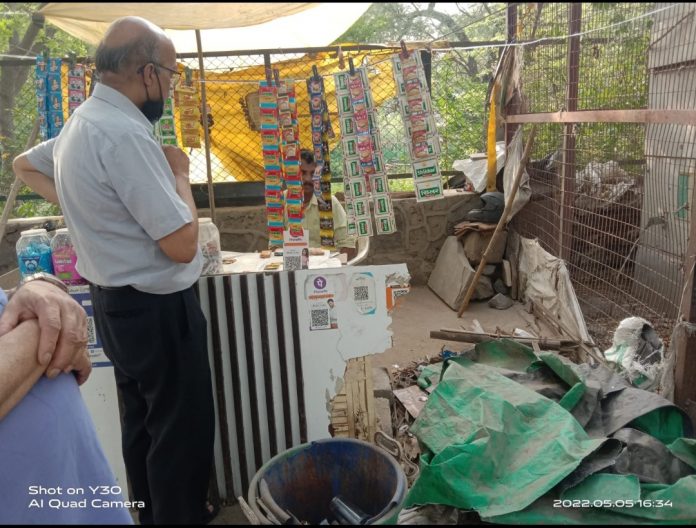 New Delhi: A joint team of Indian Federation of Trade Unions (IFTU) and Janhastakshep has slammed the South Delhi Municipal Corporation (SDMC) for demolishing roadside shops and dwellings of poor people in the Tughlakabad/Sangam Vihar area of South Delhi on May 4. Releasing a report, the team said in the name of “Encroachment Removal” the SDMC staff did not follow the due process of law and made many poor people jobless in the area who have been eking out livelihoods for decades. The move appears to justify demolition in Jahangirpuri area of North West Delhi.

A team of Indian Federation of Trade Unions and Jan Hastakshep visited the Tughlakabad/Sangam Vihar area near Karni Singh Shooting Range on 5th May. This is where the SDMC had announced “removal of encroachments” for 4th May as per its reported schedule.

According to the report,

“The team visited the area. We started from the entrance of Sangam Vihar from the side of the Karni Singh Shooting Range opposite Pehladpur. We went inside, but found no demolitions had taken place inside Sangam Vihar. We were told to go back to the entry area. We spoke to a number of local people in order to ascertain facts. People told us that whatever action took place was around the above-described entry area only.”

According to the local people,

1. Early in the morning on 4th May 2022, media vehicles started arriving. People were wondering about the reason for this, as they had no prior knowledge that encroachment removal was scheduled for that day

2. The Police came at about 10 am in good numbers. The chairman of the Central Zone SDMC was leading the team. Locals were told that the MCD team has come to remove encroachments. There were 3 kuccha shops with plastic sheets and two thelas (push carts) around the entry area.

4. All three shops have challans and Sh. Harishankar, one of the shopkeepers, had a receipt of his application for allotment of space.

5. Mr. Naresh, a second shopkeeper, was away for the wedding of a relative (he just returned today). His shop was broken in his absence.

The thela owners took their carts away. They were not stopped.

6. The SDMC team did not listen to any plea of the two shop owners present or to the local people who had collected there.

7. They seized the counters of all three shops. Harishankar sensed the danger and quickly removed his goods.

8. The owner of the third shop, a juice shop, Md. Ashraf could not remove his goods and suffered maximum loss as his fruits were perishable and not usable once thrown on the ground. His small juicer was seized along with some other material. He could recover them today after paying fine money. The contents of the shop of the absent shopkeeper were strewn on the ground even today and his shop too was broken.

9. Plastic sheets and counters were destroyed.

10. The shops of Naresh and Ashraf have been there for more than two decades. Naresh’s shop was started by his mother and that of Ashraf by his father. Harishankar came a few years later but he recollects that he has been there for at least 15 years.

11. The demolition team was supposed to proceed inside Sangam Vihar but did not. We were told that this was because those associated with the local MP intervened, but no one could give a statement confirming the same.

The report concludes that the move was to frighten people. SDMC has chosen areas where poor shopkeepers and pushcart owners are doing petty business. They were the main targets here. As such, there is an atmosphere of fear among the small shopkeepers.

2. That all the areas declared for “encroachment removal” by SDMC is where poor people live and also run petty shops. That is the target too.

3. It appears that after the Jahangirpuri demolition and the observations of the Supreme Court, the ruling party had to do something to justify their attack on the small shops and pushcarts in the Jahangirpuri area.

1. This illegal “encroachment demolition” being done without notices, without examining the papers which the poor possess and in a totally anti-poor and arrogant manner, with no intention to safeguard people’s livelihood, must be stopped immediately.

2. The SDMC must return the deposited fines and also compensate these small shopkeepers for their losses, which for such victims are back-breaking. The people of Delhi have been trying to limp back to normalcy after two years of ruined livelihoods post the pandemic as well as the lockdowns in its wake. They need all necessary assistance in doing so from all governments at all levels. We condemn the fact that shops were broken, though all three were able to show papers of long-time habitation.

The question which remains with us is this: Is the aim of the central govt to squeeze poor residents of the city eking out livelihoods at the margins, and also including poor Muslims, to leave this city? That seems to be what this mix of arbitrary attacks and high-level hate propaganda and threats aims at.