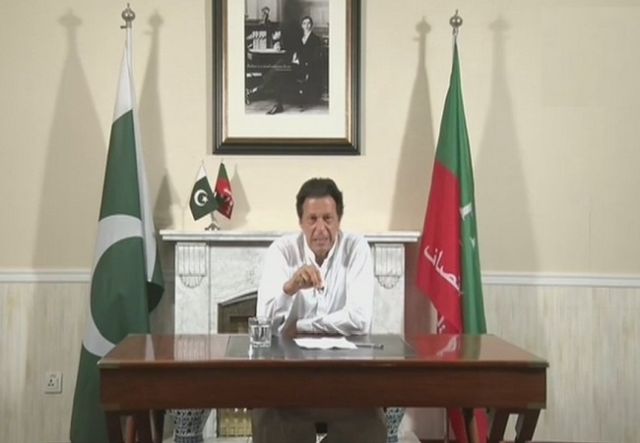 Even before elections in Pakistan had taken place, the media which articulates the Western establishment point of view, like the Economist, had already declared it a “flawed election”; it even screamed “foul play” which the “khaki umpire” (read the Army) had rigged.

If you will stand for a mixed metaphor, the “khaki umpire” is, these days, playing the monkey between two cats – the US and China. With Donald Trump and his Deep State apparently engaged in a savage fight to the finish, the balance of advantage must be seen to be with China. But the Chinese themselves are keeping their fingers on the China-Pakistan economic corridor.

Imran Khan has expressed reservations on transparency issues. On the other hand, there have been reports that thousands of Pakistani students, who in the past would have been westward bound, have entered Chinese schools of learning. Who knows, this may be the thin end of the wedge.

If the Chinese can decolonize the Pakistani mind to this extent, it must be time for the West to take note. But a sketch that sections of the Army and Imran Khan might be innately anti-
West can be overdrawn. Yes, Pakistan has choices other than the US which includes Russia, but this does not mean the Army will bite the hand that has fed it since its inception.

These are complex times and a durable phenomena like the “West” manifests itself in many forms. After all retired Pakistan armymen, like retirees elsewhere, do keep a steady gaze on post-retirement sinecures. A huge opportunity beckons Pakistan retired Army officers in Saudi Arabia.

The new Prime Minister will be pragmatic. He will not seek to impose a moral code on his armed forces. But he will draw some very firm red lines and these red lines will stretch from Pakhtunkhwa right through Afghanistan, the arena of his political baptism and purgatory. That is where he cannot be seen to be striking deals. His political turf will turn to ash if he does.

He should not be seen in the traditional Pathan-Punjabi balance. The brunt of the blowback from the Afghan war was borne by the Pathan region, true, but it was a national catastrophe. Let me explain.

Washington twisted Pervez Musharraf’s arm to turn upon those Mujahideen in Afghanistan whom Riyadh, Washington and Islamabad had reared to fight the Soviets in Afghanistan. The blowback from the Afghan war singed Pakistan. The Lal Masjid fiasco in Islamabad aggravated an uncontrollable situation. The reverberations from that blowback have not ended yet. Remember, the public outcry was against Musharraf fighting “America’s war” against terrorism. It became all the more shrill when the two brothers controlling Lal Masjid, Ghazi Rashid and Maulana Aziz, led the chorus.

Let me fast forward to the latest American debacle in Syria and its possible impact on the Af-Pak region. When almost all the mercenary Islamists had been caught with their trousers down, the existential question arose: what to do with trained terrorists?

When animal lovers in Britain forced an end to the traditional foxhunt, the impulse reached India’s southern hill station of Ootacamund also. The same question arose: what to do with hundreds of pedigree hounds? Good sense dawned and the canines were kept in a deluxe kennel, then distributed among dog lovers. But what do the trainers do with terrorists, trained and tested in action, who have not only tasted blood but have begun to love it? Trained terrorists can only have one use: as assets against any Muslim society the “trainer” wishes to destabilize – Afghanistan, Xinxiang, the Caucasus and so on.

I can quote at least two recent US Presidents to prove my point. In an interview to Thomas Friedman in August 2014, President Barack Obama made a startling admission. Asked why he had not ordered air attacks against the Islamic State, when it first reared its head, Obama said: “that would have taken the pressure off Nouri al Maliki”, Iraq’s stubbornly anti-American, Shia Prime Minister. In other words, the IS advance from Mosul to Baghdad was facilitated to oust Nouri al Maliki, an outcome the US was excitedly waiting for. Maliki had to be punished for the affront of not signing the “Status of Forces agreement” with the US. Eventually Maliki was shown the door.

After having been briefed by the intelligence agencies, candidate Donald Trump told Jake Tapper of the CNN: “Where do you think have billions of dollars worth of arms – and cash – gone in the course of our involvement in Syria? To the extremists, of course, I believe so.” He has not budged from this position.

What should worry Imran Khan is the next stage: the transfer of trained terrorists from Syria to Northern Afghanistan. Iran’s Supreme leader, Ayatullah Ali Khamenei, told a Friday congregation in Tehran on January 30: “The US transfer of IS terrorists to Afghanistan is aimed at creating a justification for its (US’) continued presence in the region.” More recently, Russia’s Deputy Minister for Foreign Affairs, Morgulov Igor Vladimirovich, told a high powered assembly at the Raisina Dialogue in New Delhi: “IS fighters were being flown to northern Afghanistan.” The Afghan air space is under the control of the US and the government in Kabul. “So who is responsible?” Vladimirovich asked.

Islamabad, Beijing, Moscow are all persuaded that Taliban will have to be part of the solution in Afghanistan. Americans have been marking time with the good Taliban, bad Taliban mantra because they clearly do not have a policy.

The moment is laden with irony for President Ashraf Ghani in Kabul. The emergence of a Pathan in Islamabad should have provided him with comfort. Instead he is having kittens: the Pathan on the other side has an agenda which is totally at cross purposes with Ghani’s. Imran’s agenda would boost his popularity in the country where Ghani, alas, has none. The moral is simple: no sidekick to a foreign power has ever been respected at home.