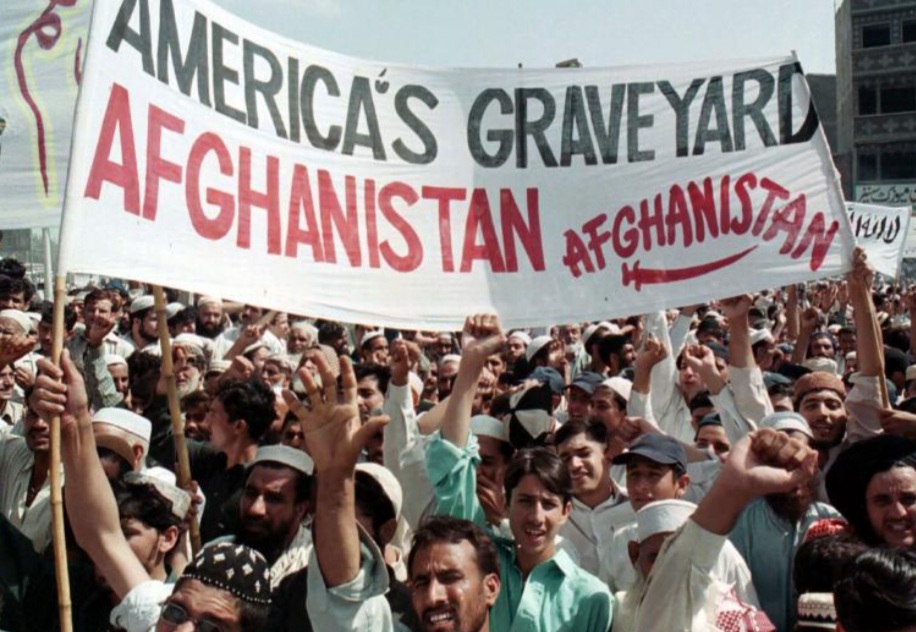 These are indeed remarkable times we live in, even as history is unfolding before our very eyes. At the beginning of the 21st Century, the US was the global hegemon, bombing & invading country after country, terrorising the world, all in the name of fighting the so-called Global War on Terror, a war based on lies & fabrications. During this period the US invaded Afghanistan & Iraq under Bush Jr. & then the liberal suave Obama proceeded to continue with the occupation & invaded & destabilised Libya, Syria & Yemen. That even as the destabilisation of Venezuela, Bolivia, Cuba & Iran proceeded apace under subsequent US Zionist Corporate juntas. But due to the remarkable resistance of these nations & peoples’, just two decades down the road – the US has been reduced to a pathetic miserable spectacle.

Thus for many of us the world over who are closely observing the events as they unfold in Afghanistan, it’s not so much about the Taliban, or even support for it, but the fact the Afghans now deserve peace and a government that must replace the US occupation forces, which itself was & is a source of regional instability.

The defeat of US-NATO imperialism, the Empire of Chaos, marks a decisive moment in our collective history. Its very inept withdrawal from Kabul signifies an Empire in steep decline, flailing its arms wildly, rather its drones, as it draws down upon its genocidal occupation of Afghanistan, as it will soon from Iraq, Syria & Yemen as well.

The World must engage with the new Afghan Government and on certain unambiguous terms. If Afghanistan collapses yet again, then from the Vietnam Saigon-Kabul moment, the Afghan landscape will be transformed into the Cambodia-Khmer Rouge moment. A disaster for us all! Thus engagement & not isolation is the answer.

Then it’s also up to the Afghan people, the other opposition forces, moderate, liberal, secular – to take on the Taliban. This must all happen through non-violent mass mobilisation, through protests and political democratic institutional processes, though which as of the present, are far from being established in Afghan politics.

Enough of wars and bloodshed, the Afghans have been suffering four long decades of wars. The Afghan nation is young, a median age of 18, with more than 60% born after 2001, thus having experienced a very different type of a world, which is also true for young Talibanis who have grown up watching TV & interacting over social media. Thus Afghans have both the opportunity & capacity to go beyond the Taliban brand of conservative Islam and will seek to expand their freedoms.

The key points & challenges ahead are as follows:

1. Will the Taliban-led Government be inclusive and share power with all the ethnic sections of Afghan society? Will elections be held? The model of the so-called “Islamic Emirate of Afghanistan”, in my assessment, will fall far short of addressing these complex & dire concerns. Afghanistan at the least requires the model of a democratic republican state, a multi-party system based on elections, thus ensuring a sharing and distribution of power. This emphasis on a homogenous imposition of Islam on a diverse society could prove to be the undoing of the Taliban & its experiment with power. In any case, as a matter of principle, no theocratic state can offer equality as part of its constitutional values, as in this case, non-Muslims, even those that do not belong to the majority Muslim sect, will overtime be relegated to second-class dhimmi status.

2. The Inclusion of Women in the Government is the key issue here, which has all the world worried and for good reason. Taliban 1.0 was a horror, but Taliban 2.0 offers hope. Yet there is much that they have to prove here. Again, it’s up to the Women & youth of Afghanistan to fight for their rights and values, even as the world must continuously pressure the Taliban to reform, especially on the issue of Gender Rights & Empowerment.

3. How will they deal with their core rural, peasant & tribal base, which has yet to make that ideological leap from a regressive reactionary extremist Taliban

1.0 (1996-2001), to a more conservative moderate Taliban 2.0 (2001-2021), which they now claim to be and there is also certain evidence of that as well. Here again, there are various ideological trends within the Taliban, and if this transformation is not handled carefully, many young minds disenchanted with a moderate Deobandi Taliban could see it as a betrayal of their version of the so-called pure Islam, its Wahhabised/Salafi mutants & variants – and then they would gravitate to the more fanatical violent terrorist organizations such as the ISIS-K & the TTP. This too is a genuine threat, a clear and present danger. The Taliban will have to handle this ideological changeover, and it can be done, must be, or the options will have horrendous consequences.

But clearly, evidence from both Iraq & Syria go to show & prove that ISIS & their “backers” who provided the logistics, funding, training, weapons & camps have been defeated both militarily and ideologically. Many disenchanted & frustrated misled youth were won over & integrated back into society. One must ensure that the US-NATO imperialist, Saudi, Israel & Turkish backing for all these terrorist organizations must end, their supply & logistical lines cut-off. Iraq & Syria have achieved this feat against great odds & there is much to be learnt from their experiences at both the ideological & military spheres.

4. How will the Taliban Government deal with the ISIS-K, al-Qaeda, TTP, Jundullah/Jaish-i-Adl, East Turkmenistan Islamic Movement (ETIM) & a long list of terrorist organisations with many masters is also a major source of concern. This has the potential to destabilise South, Central & West Asia & then beyond. This is still the test, rather the Achilles’ Heel for the Taliban. If they fail here, expect another bloody civil war and great misery for the beleaguered Afghan masses. If Afghanistan collapses yet again, there will be tidal waves of terror & another series of waves of migration into the region & beyond into Europe. Another human tragedy awaits if that is the case & must be avoided at all costs.

5. Ending the Narco-State that the US-NATO created. The dire need to end poppy cultivation, thus the heroin drug trade of which Afghanistan is now the epicenter, thanks to the US occupation & the CIA Drug Mafiosi. All the major warlords are involved in drug & weapons smuggling. Certain Intel Agencies, the Deep States & Private Weapons Security Contractors & Corporations too are involved. To break this regional & international cartel of Narco-Terror is the biggest challenge, as the financial stakes are way too high & those involved way too powerful & deeply entrenched, bristling with militias and weapons.

6. The Shanghai Cooperation Organisation International emerges on the World stage. The China-Russia-led SCO has the potential to replace the economic & military power of the US. This was not possible after Saigon-1975, but is possible after Kabul-2021, in fact, it is presently precisely the case.

Thus, engagement or isolation of the regional & international community will be as decisive in deciding the future of Afghanistan. The forces in the immediate neighborhood have a greater responsibility & far more at stake than the international community to engage with & stabilise Afghanistan. The primary responsibility is that of Russia, China, Iran, Pakistan & India who have both the strategic depth & economic resources to bring about this crucial transition. Of these five, India, due to grave miscalculations on the part of an inward-looking myopic Modi Government, has been rather late in starting off the blocks. Here, Russia & Iran will have to play a role in managing the deep contradictions between India on the one hand and Pakistan & China on the other. Interestingly, Iran will be integrated as a full member state in the forthcoming SCO conference in Tajikistan in September, further adding to the strength of this remarkable forum. The Five Stans too have a direct stake in Afghan stability for obvious reasons of ethnicity & religion and will play a crucial role in the coming times.

The Russia-China-led SCO, the Shanghai Cooperation Organization, is now the primary forum that will oversee the post-war reconstruction of Afghanistan. The Chinese-led BRI & OBOR are fast changing the connectivity of the region via massive infrastructure projects, namely roads, railways, shipping, ports, pipelines, manufacturing, trade and thus the entire economic landscape. This the US-EU just cannot match. Now Afghanistan, already an observer state, will be slowly integrated into this powerful bloc, the largest in the world in terms of population, landmass, natural resources & military capabilities. The SCO thus provides the basis for economic development and stability in Afghanistan – and a path away from religious extremism.

The SCO now has the opportunity to prove itself & replace the US-EU-NATO military and economic footprint in Asia. This portends great political consequences for the geostrategic balance of power in the region and across the world. The Putin-Xi EurAsian vision is marching ahead and the near completion of Nord Stream 2 Gas Pipeline from Russia to Germany, despite US threats & sanctions – is more evidence of this fact. The US is on the retreat, stands defeated in Iraq, Afghanistan, Syria & Yemen. In Venezuela, Bolivia & Belarus too, their agenda of regime change has miserably failed. This spells the end times for Pax Americana. New powers have now emerged, a time of great change. Palestine awaits freedom.

The writer is an expert on West Asian affairs, he is also the Founder-National General Secretary of the India Palestine Solidarity Forum.