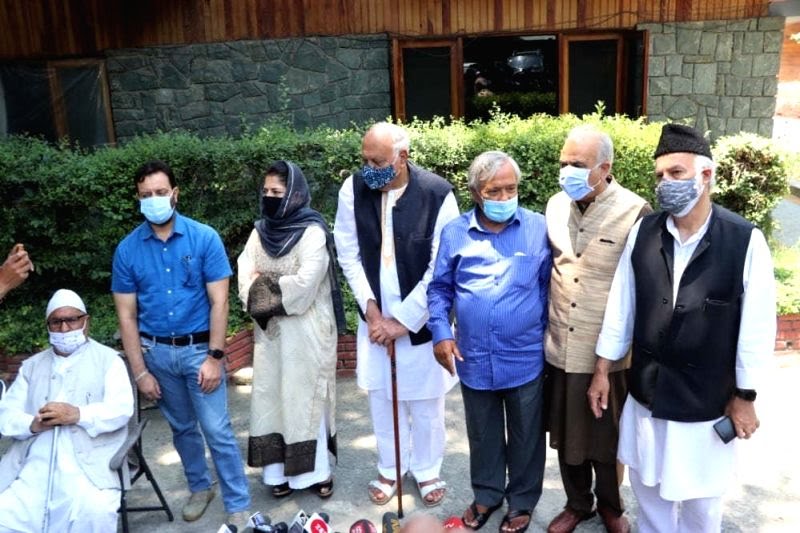 New Delhi: Fearing isolation from the democratic process ahead of the next Assembly elections, Kashmirs traditional rulers, Farooq Abdullahs National Conference (NC) as well as Mehbooba Muftis Peoples Democratic Party (PDP), will be for the first time meeting with the Delimitation Commission during its first visit to Jammu and Kashmir, beginning Tuesday, July 6.

Both the mainstream political majors, as also other smaller constituents of the Farooq-led Peoples Alliance for Gupkar Declaration (PAGD), have significantly compromised their obduracy and begun preparations for representations before Justice (retired) Ranjana Prakash Desai’s panel, both in Kashmir and Jammu, next week.

For months, the NC and the PDP had declined to associate with the Delimitation Commission until restoration of J&K’s Statehood and the special Constitutional status withdrawn in August 2019.

The PDP had maintained that having no representation in the Parliament, it had technically no locus standi in meeting with the Delimitation Commission. Constituted in March 2020, the Commission’s life expired in March 2021. Thereupon, it got the extension of one year, till March 2022.

On recommendation of the Lok Sabha Speaker, all five of the Union Territory’s Lok Sabha members-BJP’s Dr Jitendra Singh and Jugal Kishore and NC’s Farooq Abdullah, Mohammad Akbar Lone and Hasnain Masoodi-had been nominated as the Commission’s associate members. J&K has no member in the Rajya Sabha.

Even as the BJP’s two MPs held some deliberations with the Commission, the NC stood away with the argument that this process was consequent upon the J&K Reorganisation Act of August 2019 which was “not acceptable” to the party and which it had challenged in the Supreme Court of India.

Former Chief Minister and the NC’s Vice President Omar Abdullah maintained until last week that holding the delimitation in only J&K and not in other States and UTs was ‘wrong’. The Centre has repeatedly asserted that delimitation of the Assembly and the Parliamentary constituencies in J&K was a legal and constitutional obligation under the J&K Reorganisation Act in the Union Territory. The Act provides for addition of seven new Assembly segments to the Assembly of 83 members.

While J&K has lost 4 Assembly segments to the UT of Ladakh, J&K Reorganisation Act has completely abolished the legislature’s Upper House, known as the Legislative Council.

In their first collective meeting of the last three years with the J&K politicians on 24 June, Prime Minister Narendra Modi and the Union Home Minister Amit Shah impressed upon them to participate in the deliberations of the Delimitation Commission so as to ensure that there were no complaints of injustice from any quarter. They were assured that the next Assembly elections would be held immediately after the conclusion of the delimitation and the representative political government would be installed as early as possible.

In a significant development subsequently, the Delimitation Commission decided to interact not only with the five MPs from J&K but also with all the political parties who had contested last year’s District Development Council (DDC) elections and had “even a single member” in any DDC. This development has created a room for the PDP and other parties who were not expecting an invite from the Commission.

However, two of the former Chief Ministers, namely Omar Abdullah and Mehbooba Mufti, are still maintaining that they would not contest any elections as long as J&K existed as UT. They have left the issue of the restoration of Article 370 and 35-A, besides reunification of the UTs of J&K and Ladakh to the Supreme Court but both have been invariably demanding restoration of Statehood before the next Assembly elections. The Centre is known to have assured them that Statehood would be restored only after the Assembly elections and constitution of a political government in J&K.

“Our priority is to strengthen grassroots democracy in JK. Delimitation has to happen at a quick pace so that polls can happen and JK gets an elected government that gives strength to JK”s development trajectory”, Prime Minister had tweeted after his meeting with 14 leaders from J&K who included four former Chief Minister and four former Deputy Chief Ministers.

While the Commission has issued invitation to almost all the mainstream political parties active in J&K, it is reportedly planning a series of meetings with the civil society, government officials and DDCs, BDCs and Urban Local Bodies in all the 20 districts next week.

The Commission will be in Kashmir on 6 and 7 July and in Jammu on 8 and 9 July. It is scheduled to hold a preliminary meeting in Srinagar on 6 July and in Jammu on 8 July, from 3:30 pm to 6:30 pm. At Pahalgam in Kashmir, the Commission would be meeting with the Deputy Commissioners of Anantnag, Kulgam, Pulwama and Shopian from 12:00 noon to 1:30 pm on 7 July and the DCs of Srinagar, Ganderbal, Budgam, Bandipora, Baramulla and Kupwara from 4:00 pm to 5:30 pm.

“In case any political party/group/organization desiring to meet the Delimitation Commission approaches the office of District Election Officers, their request shall be forwarded immediately to the two designated officers not later than 12 noon on July 4 so that time slot is allotted to them for the meeting”, says the J&K Chief Electoral Officer’s communication to the District Election Officers.

Since its constitution on March 5, 2020, this will be the Commission’s first visit to J&K, though it had interacted with the BJP’s two associate members in February 2021 in New Delhi. An official of the Commission has lately collected data from all 20 DCs in a virtual meeting.

Previously, the delimitation of the Assembly constituencies was held in 1994-95 during the President’s Rule when seats of the erstwhile State Assembly were raised from 76 to 87. Kashmir valley’s seats were increased from 42 to 46 and Jammu’s from 32 to 37. However, during Farooq Abdullah’s NC government in 2002, delimitation in J&K was frozen till the year 2026 in tune with a decision of the Vajpayee government at the Centre for the whole country.

After bifurcation of the erstwhile State into the two separate UTs and abolition of the Legislative Council, the House would be treated as a new Assembly with reservation for Scheduled Castes (SCs) and Scheduled Tribes (STs). In the previous Assembly, there was no reservation for STs. However, seven seats of Chhamb, Domana, RS Pura, Samba, Hiranagar, Chenani and Ramban-all in Jammu-were reserved for the SCs. Now the STs would be for the first time getting some seats reserved in the current delimitation process.

As per the previous arrangement, the seats reserved for the SCs had to be rotated after every two terms. However, four elections were held back-to-back without any rotation. Now the new Delimitation Commission is likely to relocate the SC’s reservation to different SC-dominated segments, all in Jammu division.-IANS