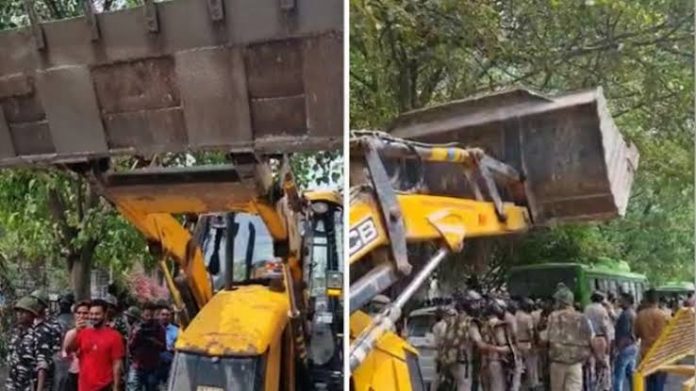 NEW DELHI : After gaining electoral success in Uttar Pradesh Assembly polls, the BJP has started believing that the “bulldozers” will also ensure victory in more states in the coming polls.

Several BJP-ruled states followed the successful ‘bulldozer’ style of Uttar Pradesh Chief Minister Yogi Adityanath and tried to send a strong message on the issue of law and order and his government’s tough stance against people involved in violence and heinous crime.

The bulldozers, which initially started from Uttar Pradesh, are now rolled out in Madhya Pradesh, Gujarat and Delhi. BJP-ruled Karnataka is also mulling to roll out bulldozers to send a strong message about government’s stance on law and order situation.

A section in the party feels that the word ‘bulldozer’ is turning into a political synonym for ‘polarisation’ after Uttar Pradesh polls.

A senior BJP functionary said that ‘Bulldozers’ are not demolishing properties of innocent people, but only of rioters and criminals or who have encroached the government’s land.

While the opposition parties alleged that the BJP targeted minorities only by demolishing their properties, the BJP accused the opponent of giving political colour to illegal construction and encroachment.

Amid allegation that the bulldozer only rolled out against the minority, Delhi BJP spokesperson Aditya Jha told IANS that it was a drive in the city against “illegal encroachment” and not individuals or community.

“It is an “anti-encroachment” drive and it will continue till people of Delhi get respite from encroachment,” Jha said.

The BJP also took a dig at the opposition, especially Congress, saying that in India, it was Indira Gandhi who first ordered the use of bulldozers on minorities at the Turkman Gate. — IANS