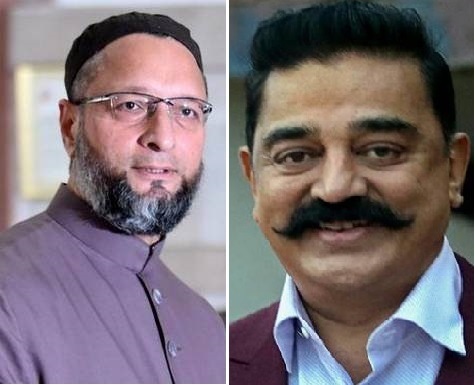 As Asaduddin Owaisi’s AIMIM had earlier announced that it is going to contest in 30 prominent constituencies in Tamilnadu for the first time, simultaneously they also approached various mainstream parties of Tamilnadu for alliance. As per the sources close to the MIM Tamilnadu unit, they are likely to align with actor Kamal Hasan’s Makkal Needhi Mayyam  in upcoming TN legislative elections.

The AIMIM’s fortunes have been on an upswing lately, as the party performed remarkably well in the Bihar assembly elections, winning five crucial Muslim-dominated constituencies such as Baisi, Amour, Kochadhaman, Bahadurganj and Jokihat. It had contested in 20 seats. It also managed to secure 44 seats in the Hyderabad civic polls, giving a tough fight to the BJP for the second place. Owaisi has managed to carve out a Muslim constituency, and the party hopes to reap similar electoral success in Tamil Nadu, where Muslims form only 5.86 per cent of the population, according to the 2011 Census. While there already are several minor Muslim parties in the state, they have been divided between the two Dravidian alliances in the past elections, “Owaisi is planning to unite all Muslim parties and contest the elections. The AIMIM may have alliance with Makkal Needhi Maiam (Kamal’s party), Naam Tamilar and other smaller parties,” said a source aware of the discussions.

On other hand Tamil Nadu has Indian Union Muslim League, Indian National League, Manithaneya Makkal Katchi, SDPI, Manithaneya Jananayaga Katchi, All India Muslim League, Tamil Nadu Thowheed Jamaath and other smaller parties in support of Muslims. Districts like Vellore, Ranipet, Tirupattur, Krishnagiri, Ramanathapuram, Pudukottai, Trichy, Madurai and Tirunelveli have a substantial number of Muslims population. Vakeel Ahmed, the president of AIMIM’s Tamil Nadu unit, had last month told local Tamil media that the party was carrying out a survey in the state ahead of the elections to identify seats. Ahmed had said earlier that he had also spoken to Duraimurugan, the general secretary of Dravida Munnetra Kazhagam (DMK), about a possible alliance but haven’t heard back from him. He had ruled out an alliance with the All India Anna Dravida Munnetra Kazhagam (AIADMK) because of its coalition with the BJP.