Aligarh”: Dr Mario Kozah, a professor at the American University of Beirut in Lebanon today delivered an extension lecture on ‘The Life and Work of Al Biruni: A Selective Biographical Investigation through the Literary Filter of a Number of his Prefaces’ at the Centre of Advanced Study, Department of History, Aligarh Muslim University.

While delivering the lecture, Dr Kozah pointed out that he will try to explain his research on Al- Biruni’s work on Hind (India) and the Masudi Canun (an extensive encyclopedia on astronomy, geography, and engineering, named after Masud, son of Mahmud of Ghazni).

He said that as an astronomer, geometrician, historian and logician, Al Biruni was beyond comparison, superior to people of his time in the art of composition, in scholar like accomplishments, and in the knowledge of geometry and philosophy, and above all he had the most rigid regard for truth.

Dr Kozah pointed out that Al-Biruni accompanied Mahmud of Ghazni to India and his stayed here for many years. “During his stay in India, Al-Biruni studied the Sanskrit language and translated into it some works from the Arabic, and translated from it two treatises into Arabic.

He further said that Al Biruni explores religion in India within a rich cultural context with objectivity and simple eloquence.

Dr Kozah stated that over time, Al-Biruni won the welcome of Hindu scholars in India to study with them, which helped him to become fluent in Sanskrit, discover and translate into Arabic the mathematics, science, medicine, astronomy and other fields of arts as practiced in 11th century India.

Dr Kozah pointed out that Al-Beruni was inspired by the arguments offered by Indian scholars, who believed that earth must be ellipsoid shape, with yet to be discovered continent at earth’s south pole, and earth’s rotation around the sun is the only way to fully explain the difference in daylight hours by latitude, seasons and earth’s relative positions with moon and stars.

“Scholars over the world have agreed that Al-Biruni had a remarkable ability to engage people in India in peaceful dialogue,” said Dr Kozah adding that Mohammad Yasin puts this dramatically when he says, “The Indica (Al-Biruni’s history of India) is like a magic island of quiet, impartial research in the midst of a world of clashing swords, burning towns, and burned temples.”

While delivering the presidential address, the Aligarh Muslim University Pro Vice Chancellor, Brigadier S Ahmad Ali (retd) said that Al-Biruni lived a wonderful life of 75 years, in which, he mastered many oriental languages.

He added that considering that there was no technology in his days to support research, Al-Biruni did a remarkable job by writing ‘Tarikh Al-Hind’, which has details of everything of Indian culture, including the religious and social systems practiced in India. 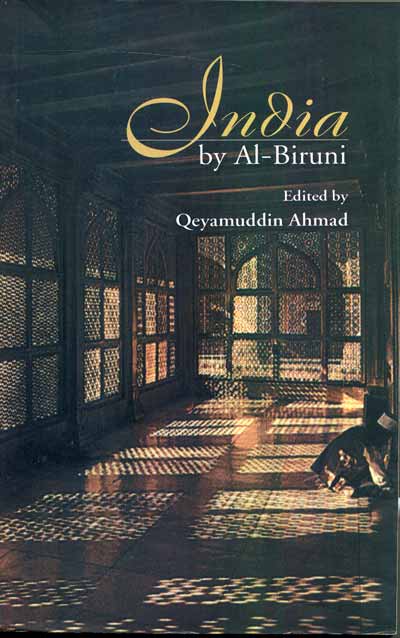 “Al-Biruni wrote, what he saw and felt after cross examining and cross checking the facts,” said the Pro Vice Chancellor adding that Al-Biruni gives graphic details of caste system practiced in India.

“Al-Biruni treated religions objectively, striving to understand them on their own terms rather than trying to prove them wrong,” said the Pro Vice Chancellor thanking Dr Kozah for enlightening the people attending the lecture with greater knowledge and understanding on Al Biruni’s works and life.

He also said that we in India get attracted to know more about Al Biruni’s work because of his research and books on India.

He further requested AMU students and scholars to find time and read Al Biruni’s books archived in the University library.

While welcoming the guests to the lecture, Professor Ali Athar, Chairman, Department of History and Coordinator, Centre of Advanced Study in History said that after completing a Phd from the University of Cambridge, Dr Mario Kozah moved to Lebanon and began teaching Arabic and Syriac languages.