Throughout the day on June 24, the Qatar based news channel Al Jazeera, splashed the news of its Palestinian-American anchor Shiren Abu Akleh, to have been killed by an Israeli bullet, as UN Human Rights Office (OHCHR) spokeswoman Ravina Shamdasani told reporters in Geneva, that Israelis had fired shots that saw her dead. On May 11 Shiren Abu Akleh was on duty, while she was covering Israeli army raids in the Occupied West Bank, in the city Jenin, Palestine. It may also be referred that Al Jazeera Media Network, had announced on May 26 that it had assigned a legal team to refer the killing to the International Criminal Court (ICC) in The Hague, Netherlands, said a report.

Since, the day she had been killed, there had been a barrage of misinformation, at international scale, that she did not die out of an Israeli bullet but from actually the Palestinian side, which therefore forced the UN body to convey it in as many words that, “All information we have gathered … is consistent with the finding that the shots that killed Abu Akleh and injured her colleague Ali Sammoudi came from Israeli security forces and not from indiscriminate firing by armed Palestinians,” as alleged by Israel. What matters here is the immediate response, that even Israel PM Neftali Bennett displayed, apart from a whole section of Israeli media, to confuse the world by its concocted narrative that Shiren A Akleh was killed by a Palestine bullet and not by an Israeli sniper. 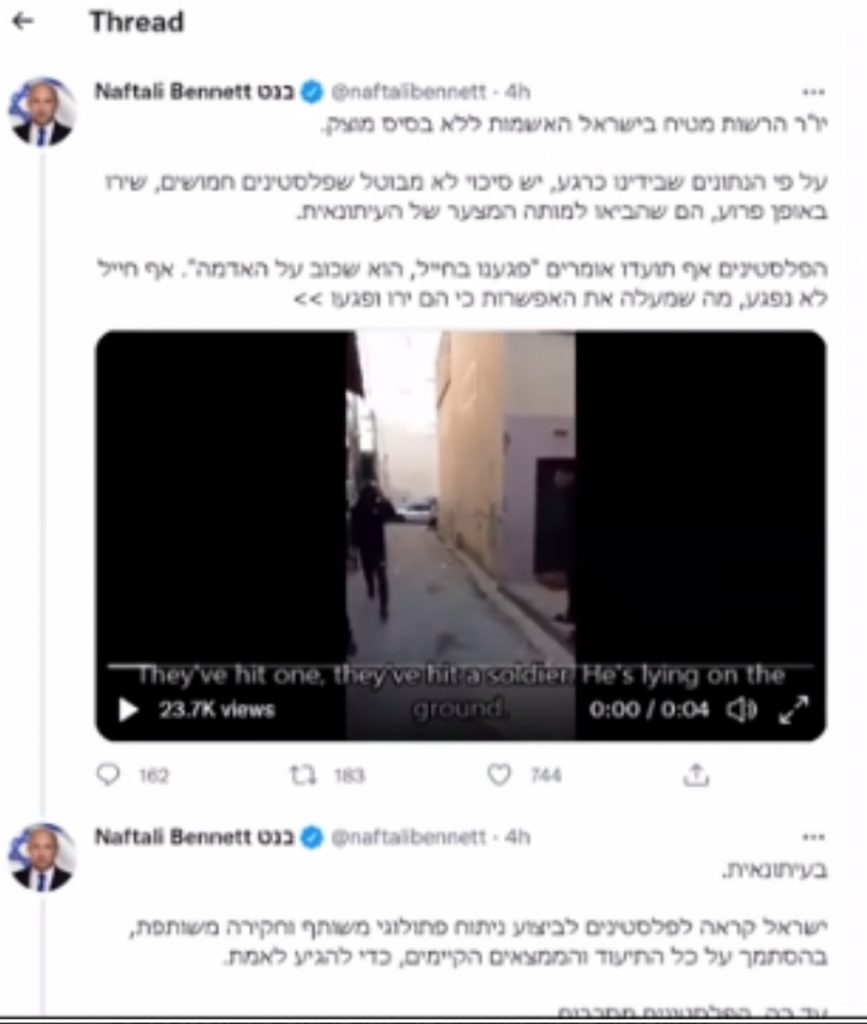 Therefore an attempt was made from the entire state of Israel to ‘damage-control’, which was likely to dent and ruin the image of Israel Defense Army (IDF), that an armed force is now even bent to kill a reporter, which may have led to an international furore, but Israel could very successfully has thwarted it. As understood, the Israeli media and through its stakes began to dish-out that she wasn’t killed from the Israel side, whereas, the fact was all otherwise. The New York Times on June 20 2 , had also reported that its own NYT investigation has revealed that there was no Palestinian involved in her killing. ‘ The probe relied on available video footage, witness testimonies and an acoustic analysis of the bullets fired around the time Abu Akleh was killed. The month-long investigation found that the bullet that killed Ms. Abu Akleh was fired from the approximate location of the Israeli military convoy, most likely by a soldier from an elite unit.’

The UN Human Rights Office is also learnt to have urged Israel government to start the criminal investigation of the killing, which is definitely not to come as that would amount to a lot of international-pressure on Israel, and Israel will continue to evade any such investigation, even for namesake, despite the fact that Israel has backtracked on its earlier stand that she might have been killed by any stray bullet fired from the IDF side.

The hogwash from the Israel side is now available as it is claimed, “Ever since the incident, the IDF has been investigating and reviewing the circumstances of Ms Abu Akleh’s death. The IDF investigation clearly concludes that Ms Abu Akleh was not intentionally shot by an IDF soldier and that it is not possible to determine whether she was killed by a Palestinian gunman shooting indiscriminately in her area or inadvertently by an IDF soldier.” Why would Israel take any blame when its’ own PM had tried to hoodwink the world with an agreement that a “Palestinian gunmen could have killed Abu Akleh.” Any internal investigation from inside Israel is never to come.

PM Neftali Bennett knows it well that killing a journalist has worldwide ramifications, as journalists safety is a priority on UN agenda. UN celebrates November 2, as its International Day to End Impunity for Crimes against Journalists, and UN is extremely serious about such killings and chronicles that 1531 3 journalists have since 1993 got killed. What in fact made Israel PM to be so prompt into countering the anti-Israel narrative is obviously for the fear of Boycott. Disinvestment. Sanctions. (BDS), which is a Palestinian movement against the apartheid policies of Israel and is involved into sensitizing international companies and brands to ‘not-to-do’ business and trade with Israel which is involved into killing a journalist etc. Many companies worldwide do have such policies and this dread is what made Israel PM to jump into the media war. 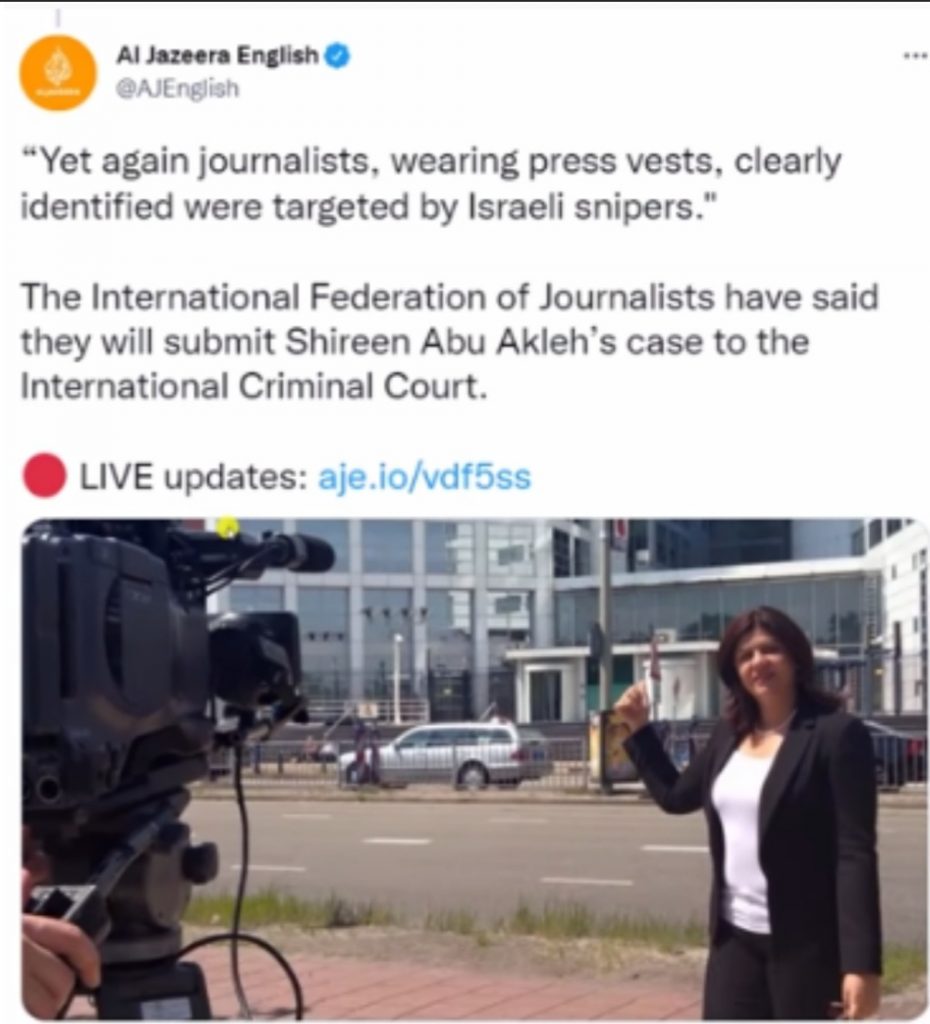 Now, the big question which rises is why would Al Jazeera take this case to International Criminal Court? Which is a toothless organization and what may be called as being a typical iron-fist-with-velvet-gloves headway, as this organization is not even recognized by most of the nations including China, India, US, Russia and even Pakistan. Bangladesh however accepts International Criminal Court, as it hopes to nail Pakistan of the war crimes of 1971.

Therefore, the rightful place by Al Jazeera was to have been International Court of Justice which is UN backed and is recognized by US and other major countries of the world. Moreover, Israel also not recognize International Criminal Court, hence, Al Jazeera has been totally caught on the wrong foot and there is every possibility that the killing of Shiren Abu Akleh will not bring any respite to the Journalist’s fraternity worldwide as well as to Al Jazeera. Shiren Abu Akleh was killed in cold-blood and her funeral was also attacked by Israeli authorities and will be consigned to become a part of history.

May her soul rest in peace. Amen.

The writer is a former UP State Information Commissioner and writes on political issues.