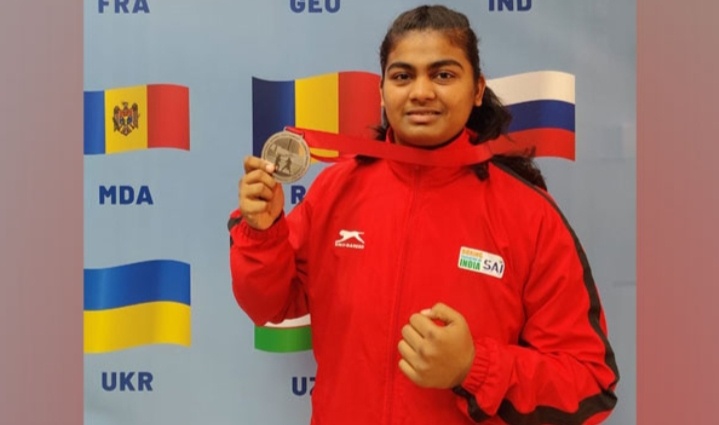 It was a time when a lot of people didn’t realize women’s boxing wasn’t in the Olympics. It was always considered a male preserve. There was a strong belief that women’s bodies were somehow too frail to box. The decision to grant it recognition for Olympics inspired many enthusiastic women who were previously discouraged from considering combat sports as career. Girls thought that women could not box, but now there are role models for them. Some of the acclaimed female pugilists stepped into the ring and answered the bell even during pandemic times.

One of those who have defied the age old myths and dispelled the belief that women can’t be boxers is Nagpur’s dream girl, Alfiya Pathan. It is a rare coincidence that a girl from a conservative community overcomes such compelling odds to emerge on the boxing landscape as a shining comet. Alfiya recently won gold at the World Youth Boxing Championship organized by international Boxing Association (known as AIBA, after its French acronym). Alfiya clinched gold as she stunned a strong contender and European Youth Champion Moldova’s Daria Kozorez 5-0 in the final. For those glued to the screens during the match, Alifya looked in complete control throughout and made the opponent work hard with her swift movement and precise punches.

Shimmering in a gladiator-style maroon boxing outfit, Alfiya paused for dramatic effect .Then she strode toward the ring as horns blared. After the bell, Alfiya plowed through her opponent who bounced and scrambled as Alfiya stalked her round the perimeter with heavy, ominous solidity. She hammered her with long, straight blows that came in combinations, hard rights, double jabs hooks, uppercuts. Alfiya stayed close, trapping her opponent against the ropes to smother her punches. “I put on a good show. I used some good technique. I showed my skill, I showed my power”, recalls Alfiya as she got reunited with the family in Nagpur after almost six months on the circuit.

Like most Indian female boxers, Alfiya has been inspired by the legendary Chungneijang Mary Kom Hmangte, popularly known as Mary Kom. Kom became the first Indian woman boxer to win a Gold Medal in the Asian Games in 2014 in South Korea and also the first Indian woman boxer to win gold at the 2018 Commonwealth Games. She is also a recipient of Padma Bhushan, Arjuna Award, Padma Shri, Rajiv Gandhi Khel Ratna Award et al. A Hindi Biopic film ‘Mary Kom’ was made about her life.

Alfiya had a successful run with a series of consistent performances both in the national circuit and on the international stage. The daughter of Nagpur’s police employee Akram Pathan, she has been on a medal-winning spree since 2016 when she took the silver in 80 kg at the National School Games and added the gold from the Khelo India Games as well as the Junior Nationals. Alfiya’s crowning glory came when she beat Kazakhstan’s Diana Magauyayeva 4-1 to bag the gold at the Asian Junior Girls Championship 2019.

At 18 years old, Alfiya s is a tremendous talent, which has imbued her with uncommon perspective and maturity. This is also the reason her backers have invested heavily in her development in and out of the ring.

In the nascent arena of women’s combat sports, boxing will always be Alfiya’s first love. She has been training since she was 13, seeking refuge from a childhood of poverty. She remains committed to getting better, while raising the profile and purses of women’s boxing. “She’s a very talented boxer, a very good athlete. She’s strong, she’s fast; she’s slick she’s smooth, she’s got all the tools. She has a keen eye for spotting her opponent’s soft spots and uses it to her advantage”, says Ganesh Purohit who has been her coach from day one. He adds, “Though she is only a junior in high school, she has all the prerequisites of athletic stardom”

When she’s not boxing, Alfiya has the open, inquisitive face of a child, but in the ring it hardens into terrifying purposefulness. Many boxers are very fast or very strong. Alfiya is both. She has never lost, and it seems not to occur to her that she could. “I’m emotionless in the ring, because it’s my job I learned in boxing to control my attitude. I’m much focused. I know that this is a historic fight. I’m going to let the people see that women’s boxing is exciting just like the men.” said Alfiya.

Alfiya’s father Akram has been an important but intermittent figure in his daughter’s life. After at first forbidding her to box, her father has been escorting her during her boxing sojourns across the country. His moral support is the motivational oxygen that Alfiya constantly needs. Her elder brother Shakib Pathan is also a national -level boxer.

With so many younger talents emerging out of the shadows of May Kom , Alfiya also aspires to move into the senior category when she completes 19 and would then like to focus on leaving a lasting legacy for female boxing in the region.