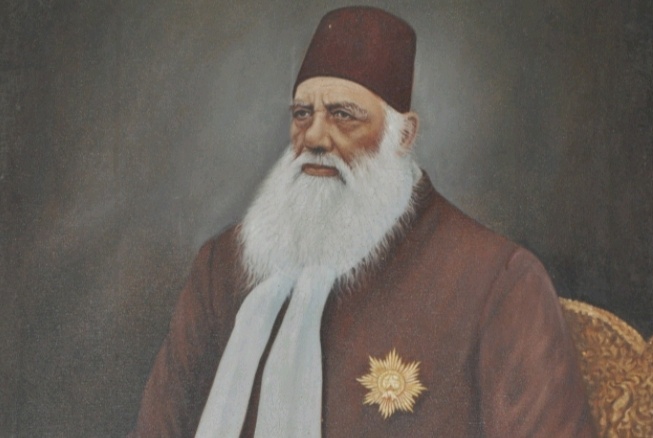 Aligarh Muslim University (AMU) in India celebrated 100 years of its existence as an institution of higher learning this year. There can be a robust discussion on the exact day and date on which to celebrate this occasion, but one can write without reservation that the founding year of AMU was 1920. While some may argue that since the Aligarh Muslim University Bill was presented on August 27th and passed on September 9th and received the Assent of the Governor General on September 14, 1920 that this should be our starting point. Others who happen to be in the majority state that AMU was established on December 1st and officially inaugurated a few days later that month on December 17, 1920, which makes December the correct starting month. But none can argue that a remarkable milestone was reached 22 years after the death of AMU Founder Sir Syed Ahmad Khan (1817-1898) who lit a candle with the establishment of the Muhammadan Anglo-Oriental (MAO) College in the city of Aligarh in 1877 which became a full-fledged torch in 1920 and has now become a beacon of light quite well-known around the world.

To start this celebration, one must look back into history, at the founder of this esteemed institution and the vision that made AMU a reality. Who was Sir Syed? And how does one explain his personality and work to South Asians today? To do justice to his legacy one has to visit the period in history during which he was born and remained active. But before one goes there one thing needs to be cleared. The idea of a separate Muslim country or Pakistan did not gain traction till the 1930’s so we cannot not associate Sir Syed with partition. Some, but not all his followers or those that had benefitted from an AMU education later became active supporters of Pakistan. That resulted in tens of thousands of divided families (like that of this writer) because many moved across the border in 1947 leaving their brothers, sisters and parents behind. Many Aligs were not convinced and stayed in India, preferring to follow Maulana Abul Kalam Azad instead of Mohammed Ali Jinnah. Others who went to Pakistan helped the country to thrive during its infancy. But sadly, that generation is no more. It is interesting to note that once at the same overlapping period of time both the President of India, Zakir Hussain and Pakistan, President Ayub Khan were Aligarh Alumni.

The relevance of Sir Syed in history, as a man of his time and as one born and brought up in the early to mid-1800’s cannot be understated. The Mughal empire in India was already fragmented and in absolute decline after the rule of Aurangzeb and his death in 1707.

Frankly not all the Mughal Kings were good rulers and as history has revealed again and again, all great empires have an ascent and an eventual decline. The military superiority of the Muslim rulers of India was already successfully challenged by the Marathas from the south, and later by the Sikhs from Punjab and eventually the East India Company from the East. The 1857-58 uprising and final defeat of Mughal rule in India became a formality. Western scientific education fast became the key to success and Sir Syed recognized that quickly. For the sake of the Indian Muslim community this turned out to be a blessing.

A rationalist to the core, Sir Syed steered his community towards western scientific education and cooperation with India’s new British rulers. In the scheme of things, he was not a poetic rebel but a revolutionary of another kind altogether. When he started his movement, the stiffest opposition he faced was from within India’s Muslims and not the majority community. Sir Syed was able to play a positive role so that this now rudderless Muslim segment of the Indian population could access the tools of the modern age and make some progress. What later became AMU was his crowning achievement.

Now let us move to more recent events and where we stand today. This writer has been covering the activities of the Aligarh Muslim University Alumni Association – Northern California (AMUAA-NC) for the past 20 years or so. Over the past two decades it has not just been the Mushaira’s (Urdu language poetry sessions) held during Sir Syed Day events in Northern California that have made them memorable. Many scholars and people of high standing have graced these occasions as Keynote Speakers as well. These have been people we have learned a great deal from. A few short glimpses are presented here:
During Sir Syed Day 2017 Indian-American Congressman Ro Khanna delivered the keynote address. He said that he did not know much about Sir Syed (or Aligarh) till he started reading about him and was fascinated by his life and his work especially his focus on Islam, science and rationality. The mixing of the of the east with the best of the west to see if there could be a new identity, culture and vision.

In 2014 the keynote speech was presented by Ambassador Islam A. Siddiqui. Dr. Siddiqui had served as Chief Agricultural Negotiator in the Office of the U.S. Trade Representative and had joined a think tank, the Center for Strategic and International Studies (CSIS) as a senior adviser in its Global Food Security Project in Washington DC.

“When I think of Sir Syed Ahmad Khan’s contributions to India and the world at large, it is about Education, Economic Empowerment and Moderation,” said Siddiqui. “Here came a thinker and a visionary, who had worked for the British East India Company, had studied the causes of the Indian revolt, published a commentary on the Bible and was even instrumental in establishing The Scientific Society of Aligarh,” he said.

In 2010, Michael Wolfe delivered the keynote speech. Mr. Wolfe is the President of the Board at Unity Productions Foundation (UPF), a unique communication effort. Film projects from UPF include “Muhammad: Legacy of a Prophet”. Michael thanked the AMUAA for their invitation and to say a few words about education. “I thought over the fundamental ideals and the goals of Sir Syed Ahmad Khan,” he said. He added that he found a great deal of similarity between those ideals and goals and the work that his own organization UPF is doing, to bring East and West into a productive dialogue. He said, “Aligarh Muslim University and the philosophy of Sir Syed are a continuing inspiration for my work. and I hope that it will be in your work as well.”

These three short segments shared here give us some idea of how important the vision of one person and a university that came into being 100 years ago has contributed positively to the lives of an entire community. AMU has remained a beacon of light and hope for many and we hope that it remains so into the future. From Aligarh to San Francisco, from Kabul to Melbourne the diaspora does not pay its respects to this esteemed institution and its founder without justification. Without education there is little chance of advancement no matter where one lives today. And without an AMU degree that our grandparents, parents received, we would have been lost.

In closing, an appeal to all readers to support the efforts of Aligarh Alumni to spread the wealth of education in India through the Aligarh Education Endowment Fund (AEEF). This fund has been set up to help young people from our community to stay in school or get a higher education. Aligarh Muslim University has been a guiding light for a fortunate few who were able to get in. There are many others who have not been so lucky and have lacked the foundations to get to the university level. They too should not be ignored. And to add some unique substance we end here with a line of Urdu poetry that I believe says pretty much what our condition would have been had not AMU been created 100 years ago. Poet Manzar Bhopali stole the show with these lines at Sir Syed Day 2006, by tying together the Muslim experience. He wrote, “Meray Allah Meri Naslon ko Zillat say Nikaal. Haath Phehlai Musalman Bura Lagta Hai.”