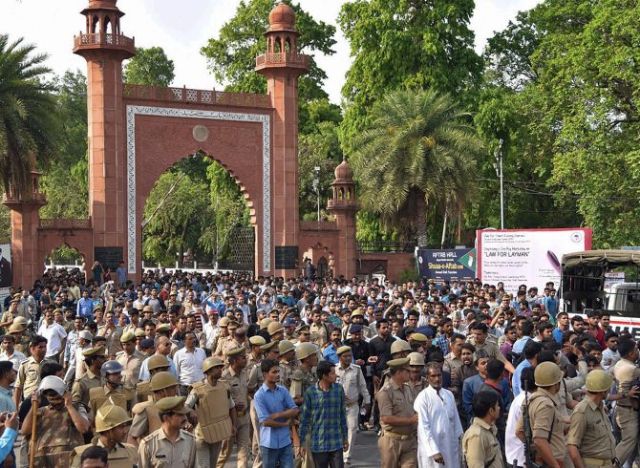 Aligarh: ​Amid of the whole ruckus in Aligarh Muslim University, a new development has taken place in the city, according to the reports; today the BJP Lawmaker Satish Gautam addressed a large group of his supporters at Ramlila Maidan, Aligarh.

In the wake of the controversy over a portrait of Muhammad Ali Jinnah, the  administration imposed  144  on Friday.

On the whole incidence SP City Aligarh, Atul Shrivastava admitted the report about provocative slogeneering  and said “the incidence took place on the roads, not in the Muslim dominated areas.

However, a video has gone viral on social media in which the people from RSS and other Hindu fundamentalist outfits rallied on bikes across the Muslim dominated locality and chanted the provocative slogans.

Earlier on Wedneday, a mob of Hindu Yuva Vahini and Akil Bhartiye Vidhyarthi Parishad barged into the campus of Aligarh Muslim University and burned the effigy as well chanted the slogans.

The whole incidence has taken place amidst the tension in Aligarh Muslim University, where the students are sitting on the strike followed the attack by Hindu Yuva Vahini goons the police force used the water cannons, tear shells as well as lathi-charged on the varsity students when they were marching towards the police station to register a complaint against the incident.