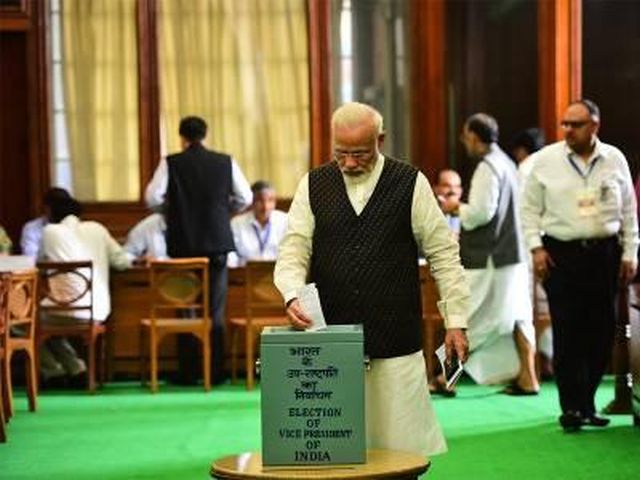 New Delhi : Election to choose the next Vice President on Saturday saw almost 100 per cent voting with 771 members casting their votes out of the 785 members of the electoral college.

The voting percentage was 98.21 per cent.

The counting will begin at 6 p.m. and the results announced later on Saturday.

Naidu, who is also a member of Rajya Sabha, left his house around 9.30 a.m. and voted at around 10 a.m. He was accompanied by Parliamentary Affairs Minister Ananth Kumar and other BJP leaders.

Union Minister Vijay Goel, former Union Minister Sanwar Lal Jat and Rajya Sabha member from Chhattisgarh Bhushan Lal Jangde were among the 14 members who could not turn up for the voting. Jat is under treatment at AIIMS.

Gopalkrishna Gandhi exchanged greetings with Union Home Minister Rajnath Singh and other leaders when he reached the voting centre.

With numbers in his favour, Naidu is all set to become the next Vice President.

Naidu expressed confidence on Saturday that most of the parties will vote for him.

BJP officials said that apart from the NDA’s 81 Rajya Sabha members and 338 Lok Sabha members, members of both Houses — of the AIADMK (50), YSR Congress (10) and the Telangana Rashtra Samithi (14), would vote in favour of Naidu.

With around support of 493 members, Naidu is all set to cross the magic figure of 394. However, BJP leaders are hopeful of crossing the 500 mark.

Janata Dal-United, which is now a part of NDA, had announced support for Gandhi.