Muslim Mirror
Home Indian Muslim Ambedkar is not a personality but a movement, which calls for social and...
Facebook
Twitter
WhatsApp
Email
Telegram 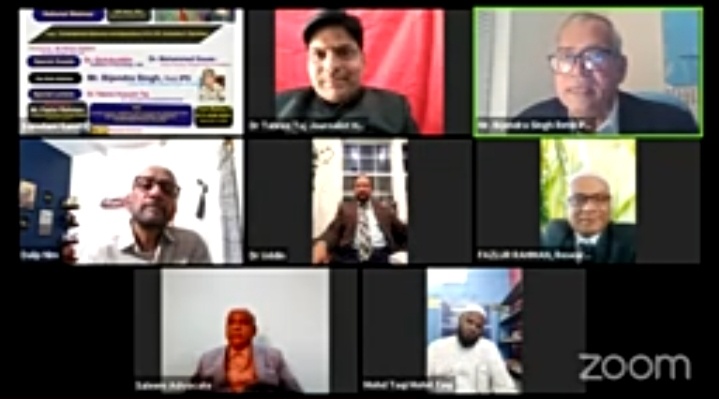 Gandhi, in a conversation with Vallabhbhai Patel, had said, ”What will happen to we Hindus if Harijan goons unite with Muslim goons.”

Chicago/New Delhi: Retired IPS officer Bijendra Singh and Dr M. Qutubuddin, the former president of American Federation of Muslims of Indian Origin (AFMI) along with others shed light on Dr Ambedkar’s teachings at a webinar held on the occasion of his birth anniversary on 14 April.

”Ambedkar is not a personality but  a movement, which calls for social and economic justice and self-respect as well,” Mr Singh said.

He said that Ambedkar fought against all odds to ensure justice for all and he even contested against national leaders like Mahatma Gandhi for the same.

He pointed out that leaders like Gandhi had an extremely pathetic mindset about Dalits and Muslims.

Mr Singh said that Gandhi, in a conversation with Vallabhbhai Patel, had said, ”What will happen to we Hindus if Harijan goons unite with Muslim goons.”

Gandhiji believed that if Dalits, whom he called Harijans, are categorised as a class, they will become a minority as they constituted 25 per cent of India’s populations. If they become a minority they will eventually unite with other minority communities including Muslims. That is why Gandhi attempted to ensure Hindu identity for Dalits, Mr Singh stated.

He pointed out that Ambedkar was categorisation of Dalits as caste. He viewed as them a class, not caste. ”Mr Jinnah, Baba Saheb Ambedkar and Paeriyar, no one of them viewed things with caste angle. They were strong supporters of human rights.”

Speaking at the event, journalist Dr Tabrez Taj said that the importance of his teachings will remain intact until the welfare schemes of the government reach the last person of the society.

”Ambedkar is not the messiah of the Dalits only but he is an example for the entire humanity,” he added.

Dr M. Qutubuddin said that the Indian constitution, authored by Ambedkar is in danger. He called for efforts to save the constitution.

Mr Qutubuddin supported Mr Singh’s appeal for unity of co-sufferers. He said, ”The dream of Baba Saheb Ambedkar will not be realised until we unite, with vision and courage and do not get exploited and divided,”

Sorry Babasaheb , we failed to create India of your dreams