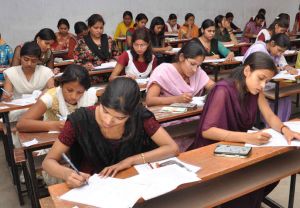 BENGALURU : It is going to be a litmus test for the Bommai-led BJP government in Karnataka as 8.73 lakh students will appear for the crucial SSLC (Class 10) exams from Monday amid the hijab row.

The conducting of exams has assumed significance as the state government has said a strict no to hijab after the High Court ruling, and the exams are being conducted in the normal pattern after the 2-year pandemic disruption.

Section 144 has been clamped in and around 3,444 examination centres across the state and tight police security cover has been arranged in the vicinity of all examination centres to avoid any showdown or untoward incidents. As many as 60,000 government officers will monitor the examinations. The first language test will be held on Monday.

A total of 8,73,846 students have enrolled for the SSLC exams this academic year among which, 4,52,732 students are male and 4,21,110 are female, four students belong to the third gender and 5,307 are specially abled. The state government has also set up helplines for the students to clear their problems, stress, fear and anxiety.

Earlier, Chief Minister Basavaraj Bommai made an appeal to the students to take up the examinations without any fear as all necessary arrangements have been made. Education Minister B.C. Nagesh urged the SSLC students to ‘shed their egos and take up examinations as per the rules prescribed by the state government’.

The ruling BJP has stated that those who do not attend exams now, will be allowed to sit for re-examination, which will be conducted a month later. The SSLC examinations will conclude on April 11.

CCTV cameras have been installed in all examination centres.

The education department is conducting separate exams for all subjects similar to the pre-Covid pattern. The students will have to obtain minimum passing marks this time.

According to the government, students will not be promoted just like they were in the last two years in the backdrop of the Covid pandemic.

Meanwhile, Opposition leader Siddaramaiah has demanded that the Muslim students with ‘dupatta’ (stole) of the uniform colour must be allowed inside the exam halls. He also said that “if Hindu, Jain women and religious leaders can wear cloth around their face, why can’t Muslim students wear it?”.

The education department has relaxed Covid regulations for students and also lifted the mask mandate. However, the examination halls have been sanitised and social distance will be maintained.

Earlier, the Special bench of Karnataka High Court has dismissed the petitions seeking permission to wear hijab in classrooms. It also stated that wearing of hijab was not an essential part of Islam.

The court had also directed the state to look into the aspect of the role of individuals who created the conflict when everything was running smoothly in the state. — IANS

‘Hijab is farz, courts not equipped to determine its essentiality’, petitioners to SC