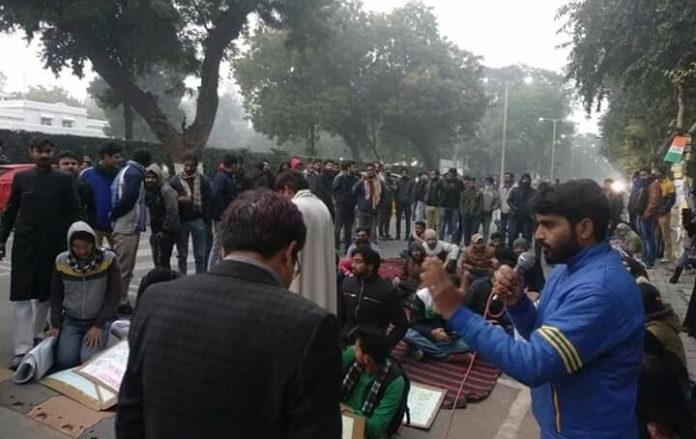 By Muslim Mirror Staff
New Delhi / Aligarh, Dec 31: Protests at Aligarh Muslim University (AMU) against Citizenship Amendment Act (CAA) and the proposal to prepare a National Population Register (NPR) and National Register of Citizens (NRC) throughout the country, which began on 9 December 2019 continued at the university’s main gate Bab e Syed today.
Today protestors were addressed by Adv. Asad Hayat Khan, senior lawyer in the Supreme Court of India. Highlighting the importance of student protests, he said “Several political parties have changed their stance on CAA after mass protests. This shows the necessity of people protesting against such acts.” He also called for protestors to remain peaceful. In the same breath he called for the government and administration to stop misuse of Criminal Procedure Code (CrPC) Section 144 to prevent dissent. He said that CAA and NRC are issues of the general population, and students taking the lead in protest against these is strengthening the power of civilians at large.
Meanwhile, Amnesty International India has released a report on police violence against AMU students on night of 15 December 2019. We thank Amnesty International India for coming up with this, and call upon all the stakeholders to take a cognizance of this report.
Today, Jamia Millia Islamia (JMI) students submitted a petition at National Human Rights Commission (NHRC) against police action in JMI campus. We urge NHRC to take up the petition on urgent basis and carry out an enquiry into the incident.
At India History Congress (IHC) held at Kannur University, Professor Emeritus Irfan Habib stood up against Kerala Governor Arif Mohammad Khan using IHC’s platform to further government agenda. Through this press statement, we salute Prof. Habib for taking this stand and feel privileged to have him in our university. At the event, security officials of Governor misbehaved with Prof. Habib, and we seek reply for the same from the Governor’s Office.
On 28 December, Bijnor police had stated that FIR have been registered against six policemen for killing the 20 year old Suleiman. Today, the police have backtracked on their statement and said that no FIR have been registered. We condemn this U-Turn by Bijnor police and seek an FIR against police personnel involved in killing and rioting throughout Uttar Pradesh.
We also stand in solidarity with the protesters throughout the country, who, despite brutal repression by the state machinery have held on to the protests, giving a strong message to the current regime that all its decisions won’t be accepted. We call upon all the student bodies and civil society groups to work together in a coordinated manner along with maintaining its original character of Muslim identity assertion.

CAA Protest in Patna : The body of missing teenager recovered after 10 days