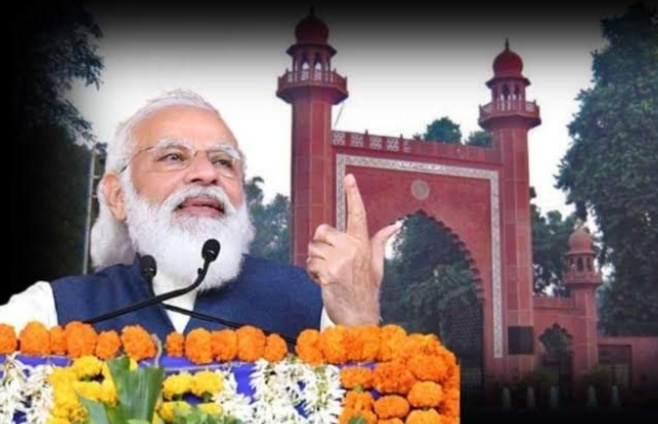 New Delhi: Paying rich tributes to the Aligarh Muslim University (AMU) on its completion of hundred years,  the Indian Prime Minister Narendra Modi on Tuesday hailed the historic institution for its unfrequented contribution to the society during the Corona pandemic. He also termed the university as a “mini India” and epitome of diversity which has strengthened India’s relations with the Islamic world and other countries of the world.  However, the PM did not announce any financial package for the AMU which is facing financial constraints due to downsizing of the government’s grant and any gesture regarding its minority character which has been under litigation.

Even though AMU vice Chancellor, Dr Tariq Mansoor lavishly praised the PM and underlined AMU, an institution of national importance, needs continued support to maintain its historical, special and constitutional character for the good of the nation.

Addressing the centenary celebration of the university through videoconferencing, the Prime Minister said that in the last 100 years, AMU has also worked to strengthen India’s relations with many countries of the world.

The AMU had helped India strengthen its relations with Muslim countries and nearly 1,000 foreign students were currently on its rolls.

“History of education attached to AMU buildings is India’s valuable heritage. I often meet AMU alumni during my foreign visits, who very proudly say that they’ve studied from AMU,” he added.

“Wherever in the world they go, AMU alumni represent the rich heritage and culture of India…In its 100 years of history, AMU has crafted and polished millions of lives, giving them modern and scientific thinking and inspiring them to do something for the society and the nation.”

He further said “People tell me that the AMU campus is like a city in itself. We see a mini-India among different departments, dozens of hostels, thousands of teachers and professors. The diversity which we see here is not only the strength of this university but also of the entire nation.”

Modi also underlined the contributions of AMU in fighting the Covid-19 pandemic.

“Getting thousands of people to do free tests, building isolation wards, building plasma banks and contributing a large amount to the PM Care Fund shows the seriousness of fulfilling your obligations to society. He said today, with such organized efforts, India is successfully combating the global epidemic like Corona, keeping the country paramount”.

The PM also urged the 100 hostels of AMU to perform an extracurricular task on this occasion of 100 years, in line with the 75th anniversary of India’s freedom, to research about the lesser known freedom fighters and added that that the university should strengthen its soft power.

In the backdrop of continuous harassment of the India’s second largest religious group ever since the BJP-led government came to power under his leadership, the PM said the country is proceeding on a path where every citizen is assured of his or her constitution-given rights, no one should be left behind due one’s religion and this is the basis of the pledge ‘sabka saath, sabka vikas, sabk viswas’.

“I assure that nobody will be left out and not discriminated against on religious lines. Everyone will move forward by enjoying the Fundamental Rights given in the Constitution.”

However, he did not announce any package or anything worth as a gift to the university to mark the centenary celebrations.

In his inaugural speech AMU vice chancellor, Dr Tariq Mansoor showered fulsome praise on the PM saying “Narendra Modi is a visionary leader who has dedicated his entire life to the service of our country and who has provided India and all Indians a bold and lofty vision.  His life’s story, one of exemplary work ethics, dedication, rising by overcoming hardship and obstacles is an inspiration to every Indian”.   “Narendra Modi has also played a pivotal role in elevating India’s image globally.  It is due to his vision and farsightedness that India has taken a firm stand against expansionist policies in our neighbourhood, and this has been appreciated much, the world over,” he added.

Perhaps, this failed to move the PM Modi to show any gratitude in return of the grant welcome or in terms of financial assistance to the institution which has been facing financial crunch. It is to mention that the community was divided on extending the invite to the PM over his record in the 2002 Gujarat riots.

Continuing his speech, the VC said today is a historical day for two reasons first the university has completed 100 glorious years from its inception and second after a gap of 56 years, an incumbent Prime Minister of our country is taking part in the University celebrations.

“A centenary is a landmark achievement in the history of a university and on this historic event, thousands of alumni, like me, feel an overwhelming sense of pride and love for our founder Sir Syed Ahmad Khan”, he underlined.

He said AMU, a unique symbol of India’s composite culture, is committed to the development of interfaith understanding among all the religions of the world and for this, the University has established the Dara Shikoh Centre for Interfaith Understanding and Dialogue.

He paid tribute to Sir Syed saying he was a true patriot of the soil whose guiding principles are very relevant today. He recalled Sir Syed’s one of famous quotes “The first requisite for the progress of a nation, is the brotherhood and unity among all sections of the society” (Unquote).

He underlined that the university has produced countless distinguished scholars in various fields who have made a mark in the country and abroad.

Besides being a great seat of learning in traditional fields, AMU today is also at the forefront in imparting modern and scientific education.  AMU has contributed immensely in the country’s struggle for independence, and nation building, throughout its history, the VC added.

This institution has changed the lives and destinies of innumerable families, majority of who, belong to the economically weaker sections of the society. But he stressed the need of government support quoting the official figures, the Muslims are at the lowest rung of the education and socio-economic ladder.

“It needs the support of the Govt. of India and various other agencies for its upliftment. AMU offers unstinted support in achieving this goal in accordance with Section 5 (2) c of the AMU Act. AMU is also at the forefront in the struggle to achieve Women’s Empowerment through Education.”

For this, in the Centenary year, we have submitted a proposal for establishing an Institute of Professional Women’s Studies, to the Government for consideration, he added.

On this occasion, the VC also invited the PM to visit the university.

“I take the opportunity in inviting you to visit our beloved institution whenever, it is possible. Our campus is one of the best in the world and it will be a pleasure to host you”.

The Education Minister also  highlighted  the  contributions and achievements  of AMU in his speech..

AMU Chancellor, Syedna Mufaddal Saifuddin said that AMU has not only established itself as the Premier Indian centre of learning, but it has also raised the bar of Indian education system in the international community.

He added that the Islamic faith lays stress on gaining knowledge and implementing and extending to others. It is the duty of the Muslims to benefit the society and the Nation with their knowledge.

Prof Naima Khatoon (Principal, Women’s College) said that the fact that the first AMU Chancellor was a woman is a testimony to of the vision of women empowerment at AMU since its establishment.

She spoke on how the Women’s College, Women’s Polytechnic and a dedicated Advanced Centre for Women Studies at AMU are immensely contributing to empower women.

There is no physical event to celebrate the occasion. Meanwhile, the entire campus of AMU has been decorated and lit up and various activities and seminars are being held virtually.