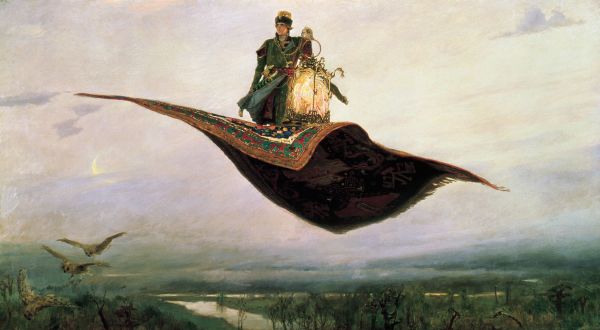 In our contemporary, high-tech world where a range of inventions and devices once thought magical are common, it is easy to understand why fairy tales have gone out of fashion. But reflecting human creativity and experience, they still have a lot to teach us — especially this example of altruism still popular across West and South Asia (two movies, two TV series and a proverb in India), despite breaking the genre’s fundamental convention.

Fairy tales, which most of us — till a generation or two ago — grew up hearing, must have a hero (occasionally a heroine too) on a quest for personal benefit, or to help a close relative or their realm, apart from supernatural occurrences and so on. But this one sees its hero, an Arabian prince famed for his generosity among all living beings, go on as many as seven mysterious quests — to help a lovelorn prince of a far-away realm, whom he has met by chance, win his beloved.

Hatim ibn Abdullah ibn Sa’ad at-Ta’iy, or Hatim-Tai as we generally know him, was an actual person, and was a noted poet too. Of the Tayy tribe (originally from Yemen but migrated to what is now northwestern Saudi Arabia, where they still live), he was, according to different accounts, either Jewish or Christian, and died in 578 CE. His generosity is well-attested in contemporary accounts (his name made Prophet Mohammad spare his descendants).

The story, which however makes Hatim a prince of Yemen, starts with telling us how his ancestors came to rule over it, and why he was so generous — with a few examples including that of his encounter with a lion that could have well been included in Jesus Christ’s Sermon on the Mount and taught Mahatma Gandhi a thing or two.

But the tale begins in earnest in the kingdom of Khorasan, ruled by Kurdan Shah, whose close associate, the wealthy merchant Burzakh, has died, leaving as heir his only daughter, Husn Banu (curiously that is also the name of Hatim’s mother, who is however identified as “Daughter of Aden”), as his heir. This Husn Banu is also generous but a little chary of marrying and seeks her nursemaid’s help. The nursemaid counsels her to ask any prospective suitor to answer seven questions, or tasks to undertake, to prove his worth.

These are ‘What I saw once, I long for a second time’, ‘Do good, and cast it upon the waters’ (or ‘Neki kar aur darya mein dal’, as we know it), ‘Do no evil; if you do, such shall you meet with’, ‘He who speaks the truth is always tranquil’, ‘Let him bring an account of the mountain of Nida’, ‘Let him produce a pearl of the size of a duck’s egg’, and ‘Let him bring an account of the bath of Badgard’.

And while Husn Banu goes on to have some misfortunes but then renewed good fortune, it is Munir Shami, prince of Khwarizm, who loses his heart to her but is stumped by the requirements. He is found weeping under a tree in a forest when Hatim comes there for hunting (we are earlier told that he doesn’t kill the animals, but only traps them and then releases them).

Learning the reason for his sorrow, Hatim goes to Husn Banu and strikes a bargain — he will do the tasks and if successful, she must marry Munir. She agrees.

The challenge is long and arduous, but Hatim is helped by a various animals, the human daughter of a bear (whom he has to marry and does after resisting for a month), fairies and princesses (whom he also has to marry) and mysterious old men who appear in his dreams. On the other hand, he is swallowed by dragons, kidnapped by mermaids, has to fight monsters, snakes, and evil magicians and supernatural beings, and encounters all kinds of strange sights like the tree with decapitated heads hanging and the blind man sitting in an open cage.

And then being Hatim, he frequently — in the middle of his original quest — jumps in undertake more quests for other helpless people, but finally finishes the primary ones in “twelve years, seven months and nine days”. Husn Banu marries Munir Shami, Hatim is rejoined by his fairy wife Zarinpash (we are not told about the others) and his father abdicates the throne for him.

The story was originally written in Persian and came to India in this form. It was translated into Urdu (as “Araish-e-Mehfil”) at that birthplace of Indian languages, East India Company’s Fort William College, while company official Duncan Forbes translated it into English in the 1820s. This version is easily available online and apart from the miraculous adventures, also gives a good account of the real Hatim.

(Vikas Datta is an Associate Editor at IANS. The views expressed are personal. He can be contacted at vikas.d@ians.in)—IANS