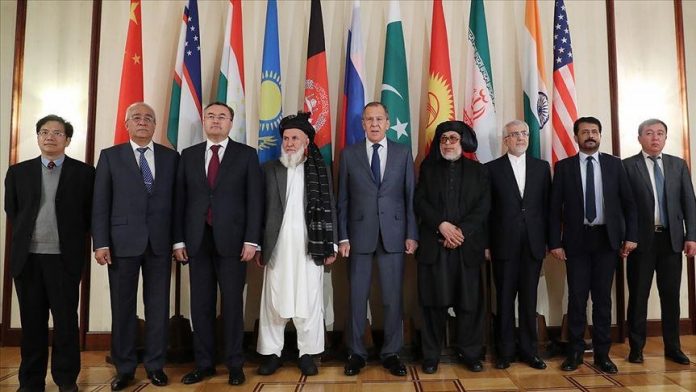 LONDON:  To intensify the endeavor to expand its diplomatic and political clout, Russia has called a meeting of regional and global powers on Afghanistan to evolve a common position.

Russian President Vladimir Putin announced the revival of extended troika and Moscow format on Afghanistan. The extended troika includes Russia, the US, and China along with Pakistan.

Speaking at a virtual summit of the nine-member Council of Commonwealth of Independent States (CIS) on Oct. 15, Putin asked the leaders to support the initiative. “We are working towards holding meetings within the framework of mechanisms in Moscow,” he said.

Senior Russian diplomat Zamir Kabulov added that the extended troika meeting will take place a day ahead of the Moscow format meeting on Afghanistan. The Moscow format is a negotiation mechanism established in 2017 to address Afghan issues. It includes Afghanistan, China, Pakistan, Iran, India, and other countries. It held several rounds of talks in Moscow in 2017 and 2018.

The Moscow meetings are expected to serve as a step amid other international efforts exploring ways to address issues related to Afghanistan’s immediate humanitarian and reconstruction requirements, Russian Foreign Minister Sergei Lavrov said in Moscow.

The foreign ministers of the 27-member Council on Interactions on Confidence building in Asia (CICA), who met recently also agreed that the restoration of peace and economic development in Afghanistan was a key component for the security and stability of the entire region.

Kairat Sarybai, a CICA official, underlined that the sooner the transition process is completed in Afghanistan the quicker it could get involved in interregional initiatives, making it possible to talk about stabilization of the situation, and then involvement of Afghanistan in regional development projects.

Uniting efforts of East and West

As the current G20 chairman, Italian Prime Minister Mario Draghi is also aspiring to unite the efforts of the West and the East to help in preventing a humanitarian crisis in Afghanistan, as well as to identify ways allowing better safeguarding of the rights of the Afghan citizens. Draghi envisions attracting the maximum number of influential external players to the solution of the multiplying problems of Afghanistan. He named Russia, China, Saudi Arabia, Turkey, as well as the countries of the region as well as the states neighboring Afghanistan to play the crucial role.

The Russian diplomats have been approaching Afghanistan’s changing realities with greater intensity, frequency, and candor. This approach reflects a change of perception driven by a pragmatic calculation of benefits and costs.

Although Russia is interested in extending humanitarian assistance to Afghans it prefers contributing through bilateral channels. Russia also remains interested in strengthening the UN mechanisms says Russian international Affairs expert Sergei Utkin. He pointed out that compared to most Western countries, Russia has advanced political dialogue with the forces that are now running Afghanistan, and is inclined to build on this advantage, rather than get diluted in multilateral groups who do not have such leverage.

Utkin alleged that some western countries “tend to blur responsibility for the development of events in Afghanistan, blame failures on the ability of the Afghan political class and army, and emphasize their positive role in providing refuge to several Afghans who collaborated with the international coalition”.

Russian experts are expressing optimism that, to prove themselves to be a credible political entity, the Taliban are likely to keep their promises by acting sensibly and refraining from crossing borders into the neighboring Central Asian republics.

By treating the Taliban, a “formidable force” Moscow seeks to advance its image as an enabler of stability, secure center stage, and bask in the spotlight as a critical dealmaker in the region. Moreover, Russia continues playing a role via the extended troika and is liaising with Pakistan, Iran, and India, too.

At an Oct. 12 emergency meeting of the G20, European Union has committed $ 1.2 billion as aid for Afghanistan. President of the European Commission, Ursula von der Leyen, stated that it was meant to prevent a serious humanitarian and socio-economic collapse in Afghanistan. The European countries are allocating a large package of humanitarian aid because they fear another wave of migration of Afghans.

Italian Foreign Minister Luigi Di Maio said it was necessary to prevent the “collapse of the state” in Afghanistan and “uncontrolled migration flows to neighboring countries with destabilizing consequences”. In this regard, Di Maio urged “to find a mechanism for financing the state without giving money to the Taliban.”

While the international community is trying to decide how to work with a Taliban-run government, they agree that political differences should not punish the civilian population. The G20 countries are exploring how the funding could be channeled through the UN agencies in Afghanistan.

Russia has been speaking about alternate centers of interaction as existing forums have proved ineffective to address several pressing crises. Speaking at a European Businesses Association (EBA) meeting in Moscow, Lavrov said that at a time when global multipolarity is taking shape, the center of global growth is shifting from the Euro-Atlantic region to Eurasia (territories adjoining Europe and Asia). He said Russia is interested in having all countries and organizations located on this vast continent become part of Eurasia in geo-economic terms as well.

Moscow has used diplomacy as a tool to advance this objective by drawing closer to the current rulers of Kabul and the Central Asian states through a risk aversion approach. As compared to the earlier Afghan administrations which ruled from 2001 to 2021, Russian observers voice a higher level of comfort for working with the Taliban in Kabul. A proponent of Russian conservatism, Valery Korovin, author and commentator at Russia’s Center for Eurasian Geopolitical Initiatives, has described the Taliban as being “allies of Russia, with them we have better prospects when returning to Afghanistan”.

Russia has also taken quick measures to get the Central Asian countries aligned to its security perceptions in the region and has convinced them to accept a joint strategy to counter any potential threat.

Russian goal is to ensure that engagement with the Taliban brings gains both in terms of diplomatic penetration in and around Afghanistan and also to consolidate presence and expand influence in the region. Along with partners who have similar security concerns or identical aspirations for regional cooperation, Russia remains cognizant of the role regional states can play in offsetting any risks.

Their aim of exploring peacebuilding collectively is likely to yield greater and long-lasting dividends, placing Russia in an advantageous role in future energy, transport, rail, and road linkages, financed primarily by Chinese investment initiatives in the region. Through these steps, Russia aims to earn diplomatic and economic gains, consolidating its presence and expanding its regional influence.

In recent weeks, many states bordering Afghanistan reflected an increasing realization of the need to align their policies with the evolving realities and emerging power brokers in that country.

Afghanistan’s Central and South Asian neighbors are seeking to avert the risk of a refugee influx, which could worsen the instability they have experienced during the economic slowdown induced by the continuing COVID-19 pandemic. That is why the regional powers in Afghanistan’s neighborhood, namely China and Russia are stepping in to fill the gap left by the withdrawal of the forces of the US and its NATO allies.-AA