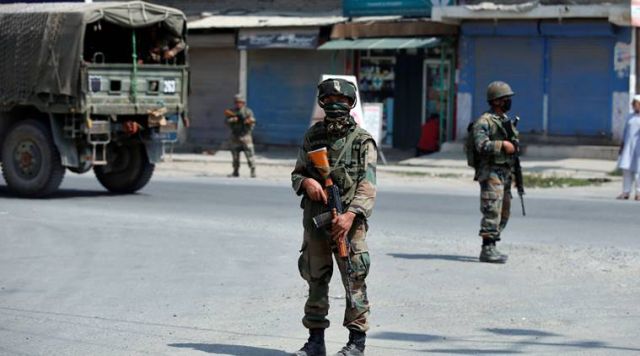 Tanveer Ahmad Wani’s death, which the police and army say was in response to stone pelting, is the eighth killing in Beerwah since the 2016 uprising and has only added to the anger across Valley.

Beerwah, Jammu and Kashmir: Past the breathtaking karewas and vast expanses of swaying paddy fields, Degree College in Beerwah is located at an idyll stop atop a hillock, which offers a panoramic view of the Valley encircled by Pir Panjal forests. On Wednesday (July 26), students huddled under the shade of apple trees to remember Tanveer Ahmad Wani, a young tailor who was killed by the army on the afternoon of July 21 in Beerwah’s main market.

Twenty-four year old Tanveer lived in a locality opposite to the college and was known to most students who vouched for his innocence. “It was a cold-blooded murder, but the irony is that police has failed to make any arrests so far,” the students voiced.

The killing, which has triggered outrage in Beerwah, took place three months after Major Leetul Gogoi, of the 53 Rashtriya Rifles, strapped a civilian to the bonnet of a jeep as a human shield and paraded him through several villages. It is this army unit now under fire over Tanveer’s killing.

Tanveer was hit with two bullets – one in the mouth that exited through the back of his skull, the other in his thigh – by soldiers from a patrol party following a “loud sound” in the market before Friday prayers.

Witnesses who spoke to The Wire said some students from a nearby school burst a cracker or an inflated juice tetra pack, which made the loud noise. “Within no time, the patrol – consisting of eight to ten men – ran amok and started beating people,” said a group of drivers at the taxi stand.

A tea stall owner at the stand said many vendors became victims of the troopers’ anger as they patrolled through the main bus stand. “We thought they had gone but almost 20 minutes later there were gun shots that killed Tanveer,” he said.

The distance between the place where children had presumably burst crackers or a juice pack, and the spot on the Beerwah-Magam road – outside the bus stand – where Tanveer was shot, is around 300 meters.

Ghulam Nabi Dar, who runs a news agency in the market, almost 100 meters away from the spot, said that as the patrol party walked past his shop, they grabbed a young boy by his collar and took him along.

“The boy cried for help and a small group of youth started shouting at troopers to leave him,” said Dar, adding that at this time, Tanveer – who worked at the shop opposite to his – was heading home for lunch.

“The beating of the young boy had caught everybody’s attention. More people started shouting in anger, though nobody dared to go close to the troopers. Some children from nearby streets connecting to the main road hooted the troopers. That is when they opened fire,” said another shopkeeper. “The next moment, we saw Tanveer lying on the road while the boy was still crying for help.”

While Tanveer died on the spot, another young boy, Muhammad Ibrahim, received a bullet injury in his shoulder. The Wire also located the young boy, Rayees Ahmad, who was taken along by the troopers and was freed only after the killing.

After initial reluctance, the families allowed the two boys to speak to The Wire. Ahmad, a class X student who lives in a locality barely 50 meters from the spot where Tanveer was killed, had gone to the market to get bread for evening tea.

A young boy who loves fishing, Ahmad said he saw the soldiers coming from the opposite direction. “The baker shouted at me to run but they [the soldiers] caught hold of me and one of them hit me with a gun. They tore off my clothes. I resisted but one of them slapped me. I started to bleed from my nose. They were dragging me along when I saw people shouting at Tanveer to run. Suddenly, one of the soldiers turned and fired in the direction of youth. He [Tanveer] fell down. Another boy [Ibrahim] who got injured was crying for help,” recalled Ahmad.

He said while he was being taken away “a stone was thrown at the troopers from somewhere.” “That is all. There was no stone pelting. The youth didn’t come to rescue me while I was bleeding,” he said.

Ibrahim, who lives in Gourpur, almost three kilometers from the market and on the backside of the Degree College, is recuperating at his home.

“I was on my way to meet my father when the troopers walked past me along with the boy [Ahmad]. Some youth were shouting at them [the soldiers] to release the boy… I had just turned back to see the boy who was crying when a bullet hit me. Next, I saw Tanveer lying on the road and bleeding profusely. I somehow ran into a nearby street wherefrom I was rushed to the hospital,” said Ahmad.

He too dismissed the allegations of stone throwing by the youth on the patrol party. “Nothing of that sort happened,” he recalled.

Later in the evening, army’s spokesman Colonel Rajesh Kalia told the media that an army patrol was “subjected to heavy stone pelting by a mob” in Kondur village near Beerwah.

“In no time, the numbers swelled and the intensity of stone pelting increased. Some stone pelters tried to close in with the patrol and snatch weapons from the soldiers. Two persons were reportedly injured when troops opened fire… one of them succumbed later,” Kalia said.

The police, however, contradicted the statement. “Some miscreants pelted the patrol with stones and someone among them hurled a fire cracker towards the army men. Because of the bang, the army men thought a grenade was hurled and they retaliated,” the statement said.

The police have registered a case (FIR NO 74/2017) under section 307 (attempt to murder) of the Ranbir Penal Code (RPC) against the 53 Rashtriya Rifles, a copy of which has been accessed by The Wire.

‘No hope for justice’

At his newly constructed house, Tanveer’s father, Muhammad Akbar Wani, a stone querier, has just one question: “Why hasn’t the police registered murder cases against the army? Didn’t they kill my son? What proof do they [ the police] need more?” While section 307 of the RPC defines “attempt to murder,” section 302 of the RPC is invoked when a murder case is registered.

“We are investigating the case and have already recorded statement of some eyewitnesses. If need arises we will change the case and register it under section 302,” said a senior police officer of Budgam district.

Tanveer’s is the eighth killing in Beerwah since the summer uprising in 2016 and has only added to the brewing anger across the Valley.

“The registration of cases by police in the civilian killings and the announcements of magisterial probes and investigation is a tactic to pacify public anger. There has been no indictment of any accused troopers or policemen in a single case of civilian killing since 2016 uprising which speaks volumes about the prevailing justice system,” said noted human rights lawyer Parvez Imroz.

During the summer uprising in Kashmir last year post the killing of Hizbul Mujahideen commander Burhan Wani, nearly 100 people were killed in firing by the government forces. Though the government in February ordered probes into the killing by district-level special investigation teams of the J&K police, there is no word from either the government or the police about the outcome of these probes.

“The non-action on part of the government has led to helplessness among people – particularly the youth. In such a scenario, when political uncertainty has already deepened, Kashmir’s younger generation believes that the rebellion is the only way to get their rights because here is no hope for justice,” said political analyst Noor M. Baba.

Another killing, another case registered

Two days before Tanveer’s killing, Mohammad Abdullah Ganai, 60, died at a Srinagar hospital after he was shot by the army following an altercation between them and civilians over thrashing of youth by the former in Hussainpora village in Anantnag.

Along with a group of locals, Ganai had staged a protest against the alleged beating of a youth. “They were arguing with soldiers over the incident when someone from the troopers opened fire, injuring Ganai,” said a local shopkeeper in Goriwan locality where the incident took place.

Though the police had initially registered cases under section 307 of RPC, it was converted to section 302 after Ganai’s death. So far the police has, however, neither made any arrest in the case nor questioned any of the accused soldiers.

A mutton shop owner, Ganai was the sole bread earner of his family, which includes his wife, two daughters and three sons.

This year alone, around 25 civilians have been killed in alleged firing by forces after army chief Bipin Rawat warned of stern action against those who disrupt counter-insurgency operations. In some cases, like that of Tanveer, eyewitnesses have said the victims were not even pelting stones.

“Had the government taken some concrete action in the human shield case or brought the accused troopers involved in civilian killing since the 2016 uprising to book, Tanveer and other innocent civilians wouldn’t have lost their lives,” said independent legislator Er Rashid.

Mudasir Ahmad is a Srinagar-based reporter.