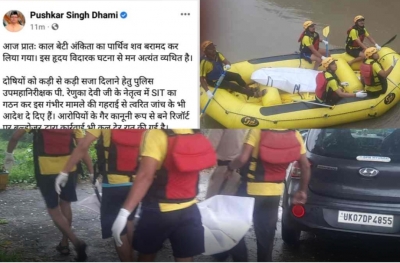 DEHRDUN : The body of Ankita Bhandari, a 19-year-old staffer at a resort in Uttarakhand who went missing a few days ago, was recovered from the Chilla canal in the state on Saturday and Chief Minister Pushkar Singh Dhami has ordered an SIT probe into the murder.

Ankita, a resident of Dobh in Srikot, used to work at the resort owned by Pulkit Arya in Uttarakhand’s Pauri Garhwal. She went missing on September 18.

The prime accused is BJP leader Vinod Arya’s son Pulkit, who was arrested with two others on Friday.

Ankita, a resident of Dobh in Srikot, who used to work in the Vantara resort in Uttarakhand’s Pauri Garhwal. She went missing on September 18.

The discovery prompted BJP to remove Vinod Arya as well as his other son Ankit.

The party has suspended Vinod Arya, a member of the national executive of BJP OBC Morcha, as well as his other son Ankit, a minister of state.

On directions of the Chief Minister, the JCB razed to ground accused’s illegal resort on Friday night.

Strict action will be taken against the officers who were involved in the illegal construction of the resort, Dhami said.

“It is our resolve that the those guilty of this heinous crime will bot be spared,” he added.

Ankita’s family had lodged a missing complaint on September 21 with the revenue police and on the District Magistrate’s direction, the matter was transferred to regular police the next day.

Taking cognisance of the incident, Ashok Kumar, Director General of Police, Uttarakhand, had directed the Superintendent of Police, Pauri for a speedy investigation into the incident.

Following their arrest of the accused they told the police that after murdering Ankita, they threw her body in Chila Shakti canal.

Under the guidance of DGP Uttarakhand, the SDRF started search for Ankita in Shakti Canal, Chila Power House.

SDRF rescue team was engaged in searching the spot and the deep divers were also looking for the body in the bottom of the canal.

The body has been handed over to the district police.

According to reports, soon after the recovery of Ankita’s body on Saturday morning, people are demanding death sentence for the accused.

Outrage in Rishikesh grew over the alleged killing of Ankita Bhandari. People set a factory of the prime accused, BJP leader’s son, in Pawri Garhwal on fire on Saturday.

On Friday, the protesters had vandalised Pulkit’s resort. On the direction of Chief Minister Pushkar Singh Dhami, the resort has been razed.

Expressing deep grief over the incident, Assembly Speaker Ritu Khanduri Bhushan said: “This is a heart-breaking incident that shames humanity. We have lost a daughter of Uttarakhand for which we all are sad.”

She also expressed condolences to the bereaved family.

Pulkit Arya and his two aides have been sent to 14-day judicial custody. — IANS