Hyderabad, April 9: Andhra Pradesh Human Rights Commission today issued notice to Hyderabad Police over the custodial torture of Md Akram Khan, a youth picked in a theft case and allegedly exposed to third degree torture by Abids Police. APHCR issued notice only after Akram accompanied with Hyderabad corporator Amjed Ullah Khan approached the commission and narrated his story. The rights body has asked Commissioner of Police, Hyderabad to inquire and submit a report in Md Akram’s case (SR No: 3571/2013) before 22nd April 2013.

Akram Khan was picked up by Abids Police as a suspect in a theft case and was tortured to third degree. He approached Andhra Pradesh Human Rights Commission and met Mr. E Pedda Reddy, member APSHRC along with Amjed Ullah Khan (Corporator) and Asad Ullah Shareef (Adv). Akram Khan told the APHRC member the entire incident and how he was subjected to third degree by Abids Police and the denial of the police torture by Asst Commissioner of Police, Abids through media. Akram said as he was unable to stand or walk due to Police torture and blood was coming while he urinated he came today to the APHRC. After listening patiently to Md Akram Mr. E Pedda Reddy member APSHRC asked the Commissioner of Police, Hyderabad to submit a report on before 22nd April 2013 to the APSHRC. 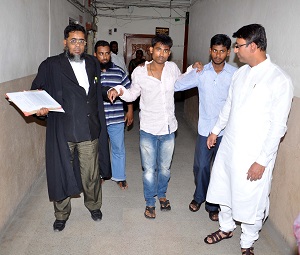 After submitting Akram’s petition, Mr. Amjed Ullah Khan, Corporator, Majlis Bachao Tehreek said it has become the daily routine of the Hyderabad Police to pick any innocent Muslim youth and subject him to torture. He alleged that this is not the first incident by Abids Police but every day Muslim youths are picked from Jagdish Mobile Market on one or the other pretext and police claim that the said person is wanted in a theft case. Mr. Khan alleged the Abids Police will ask the relatives of the Muslim youth to pay heavy amount or bring and give some new mobile phones to set free their youth. If the relatives of the said youth do not meet the demands of the Abids Police either the youth is tortured or put up in false cases.