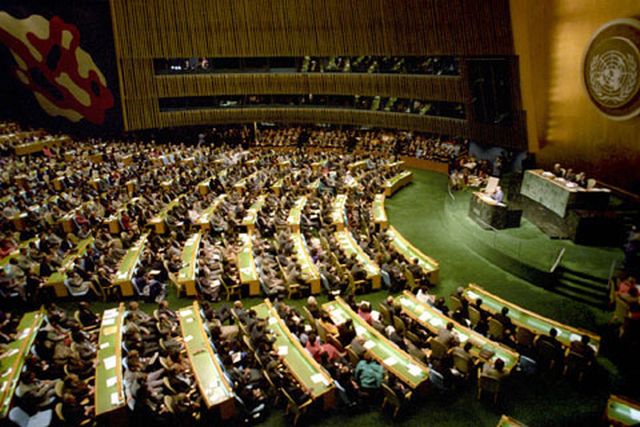 United Nations : Arab nations have deftly outmanoeuvred the US at the UN to defeat a resolution it sponsored condemning Hamas by requiring a two-thirds majority for it to pass, rather than the simple majority it received.

But a counter-motion proposed by Ireland calling for an end to Israeli occupation of lands seized after the 1967 Arab-Israeli Six Day War, passed in the General Assembly with an overwhelming support on Thursday in a setback for Washington, which found itself isolated with only five others joining it to vote against this resolution.

India voted for the Irish resolution and abstained on the US resolution on Hamas but voted with Washington against the procedural requirement for a two-thirds majority.

US Permanent Representative Nikki Haley pushed hard for the anti-Hamas resolution that was to have capped her two-year campaign in support of Israel and against its foes before she leaves her cabinet-level post at the end of the year.

The resolution sought to condemn “Hamas for repeatedly firing rockets into Israel and for inciting violence, thereby putting civilians at risk” and demand that it, the Palestinian Islamic Jihad and other militant groups end all provocative and violent actions.

Its passage would have been a symbolic victory for Haley after Washington’s isolation on Israel-related resolutions, especially one last December critical of US decision to move its embassy to Jerusalem when only eight others joined Washington in voting against it.

The anti-Hamas resolution received 87 votes in favour and 57 against it, with 33 abstentions.

But the US was robbed of its victory by the clever ploy introduced before the vote by Kuwait on behalf of the Arab states to require a two-thirds majority contending it was a matter of international peace and security.

That procedural manoeuvre received 75 votes, with 72 against it and 26 abstentions and nullified the US resolution on Hamas that followed it despite the simple majority it received.

Hamas, which effectively controls the Gaza Strip that was taken by Israel from Egypt in the 1967 war, has carried out suicide bombings and other terrorist attacks and is designated a terrorist organisation by the European Union and the US.

By singling out Hamas for its “ugliest cases of terrorism in the world”, Haley had corralled a simple majority for the resolution and this led to the Arab counter-strategy.

Because of the terrorist legacy of Hamas, many countries like India did not join the Arabs to vote against the US resolution and abstained, while others like Singapore voted for it.

India kept its delicate balance by voting with the US against the two-thirds majority requirement, while abstaining on the resolution itself to avoid confronting the Arabs.

The Ireland-sponsored resolution, which passed 156 for to six against with 12 abstentions, also reiterated support for a two-state solution to the Palestinian issue based on the pre-1967 borders and adherence to UN resolutions.