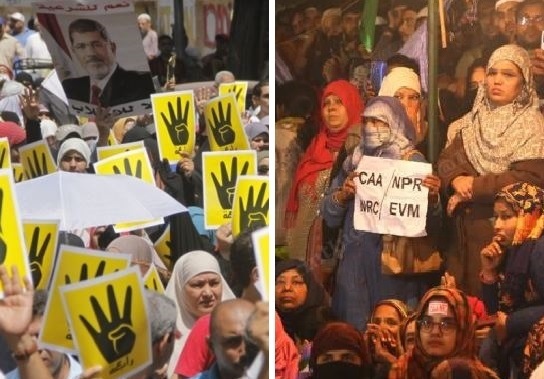 The past week marked the tenth and first anniversary of two different events, both starting off as a protest against the ruling regime and in turn snowballing into massive movements.

The first, the so-called ‘Arab Spring’ marked its tenth anniversary and the second, the Shaheen Bagh sit-out its first anniversary. Let’s have a look how these two movements started and what did they achieve.

Ten years back when a young street vendor named Mohamed Bouazizi in the Tunisian town of Sidi Bouzid set himself on fire on 17 December 2010, he started a revolution, which spread across his own country and later to most of the Middle Eastern countries.

Due to the protests Tunisia has transformed in many ways, it has held numerous elections. Form of government to strengthen the parliament has been affected; a new constitution that enshrines civil liberties and women’s rights while limiting the power of the armed forces has been adopted.

The protestors had hoped for change, dawn of a new era of prosperity and freedom. But ten years later, that spectacular moment of joy and liberation has faded away to reveal a sober reality. A small country struggles to find its way despite economic stagnancy, persistent corruption and stark political and cultural polarisation.

Though Tunisia is widely celebrated as the sole success of the Arab Spring for a transition to democracy and the revolution might have achieved its first aim of winning political freedom for the country, yet the economic prosperity still eludes it.

The mise en scène of the event instigating the Arab Spring constructed in the Western media theorised the outbreak of the Arab uprisings not as a logical reaction to despotism and natural drive for freedom and democracy, but as a product of perceived Arab irrationality and impulsiveness.

Second, Western media and scholarship have reduced the Tunisian revolution to a story of success or failure. And has done much to validate the tired trope that Arabs are not ready for democracy.

After affects of the Arab Spring
The ten years of the “Arab Spring”—the last of which is the year of COVID-19—have brought many Arab countries to the edge of an abyss. The food shortage, the unending wars in Libya, Syria, Iraq and Yemen, the Iranian expansion and global apathy have worsened the distress of the Middle East.

However, the Arab Spring and the political movements spawned by it were rejection of decades of failed governments and aspiration for a democratic styled governance, in most countries. The uprising in Syria, for example, began as small regional protests calling for political reforms, not the downfall of the dictatorship. It was only after the initial calls were met with overwhelming violence that those calls eventually changed.

But other than geographic proximity and a shared history of living under dictatorship, the Middle Eastern uprisings had very little in common, besides the chant that spread collectively across the region: “The people want the downfall of the regime.”

Oz Katerji, a British-Lebanese freelance journalist sums it up by saying that the Arab Spring may be over, but the civilian uprisings in the Middle East have barely begun. The Middle East now finds itself in the state of flux that Karl Marx described as permanent revolution, the aspirations of its people permanently churning but never fulfilled. There is no way for dictatorships to turn the clock back to 2011, and there is no desire from their populations to accept a status quo that permanently disenfranchises them. The powder is drier than it has ever been; all that is missing now is the next spark.

Shaheen Bagh Sit-out
The Shaheen Bagh sit-out started very quietly on the night of 16 December 2019, when late at night four men and six women, with some children in tow, moved from the lanes of Shaheen Bagh, a Muslim ghetto in South Delhi, onto the main road connecting Delhi to the neighbouring state of Uttar Pradesh. They silently sat on the road, few hundred metres away from the spot where earlier in the evening the police had dispersed a crowd of youngsters protesting against the controversial Constitutional Amendment Act (CAA) and National Register of Citizens (NRC), violently. The location of the sit-out made it stronger as it affected the traffic between the capital city and its neighbouring state to a large extent, and the resultant chaos lent it more publicity.

From the night of 16 December onwards, these handful women were joined by hundreds of protesters, mostly women, both young and old. Their main grouse was the exclusion of Muslims from the controversial Constitutional Amendment Act (CAA) and the plethora of complexities which will be thrust on the shoulders of Muslims to prove their identity, as and when the NRC-NPR are rolled out in the country, besides raising their voice against the barbaric police action on students of Jamia and AMU, and in several other cities of UP, days before.

The Shaheen Bagh demonstrators who took their cue from the bird Shaheen, and were full of determination to get the government listen to them, and had a clear view of the trials and tribulations to unfurl for the Muslims to comply with, once NRC-NPR are rolled out, like Shaheen-the bird.

Shaheen is a Persian origin word in Urdu, referring specifically to the Barbary falcon. In Persian, Shaheen literally means ‘majestic’ or ‘like a king’, besides symbolising victory in regard to a decision that has already been made. The vibrant bird also signifies strength, as though small in size yet it preys on larger birds.

In Urdu, renowned poet Allama Iqbal, in his youth-focussed poetry, has used the word Shaheen symbolically to motivate and inspire the young and old alike to provide a leadership which leads the nations to the heights of self-determination, and is best exemplified in his concept of the perfect man (Mard-e Mo’min).

Providentially the women protesters at Shaheen Bagh proved to take upon the qualities of the bird on which their locality had also been named. They proved that they were visionary, resolved, determined and tenacious like the free bird. And were ready to take on the might of an unresponsive establishment through their silent protest.

Within months, this sit-out, which was removed by authorities in late March earlier this year – when the countrywide lockdown was implemented, became a symbol of unswerving voices against what has been perceived as a discriminatory law, against the minorities, landless, illiterate and the downtrodden.

These women described their fight as a fight to save the Constitution of the country. They became a symbol of resolve and tenacity, just like a mother who can move mountains for the welfare of her children. Similarly, they felt that they were fighting to secure a dignified and proud future for themselves and their children as enshrined and guaranteed in the Indian constitution.

The two events though separated by thousands of miles had quite a few similarities between them. Both were spontaneous actions, with no pre-planning and no idea what will be the ultimate result of their action. Yet, both were able to involve a large number of people and were able to influence the future actions of the rulers and the ruled. Both found unparalleled support and adulations besides attracting the attention of the world and this shows the strength of people and the power of their silent protests charting a whole new path for their countries and fellow citizens through peaceful and sometimes violent reactions to prevailing conditions.
**
Asad Mirza is a political commentator based in New Delhi. He was also associated with BBC Urdu Service and Khaleej Times of Dubai.
He writes on Muslims, educational, international affairs, interfaith and current affairs.
Email: asad.mirza.nd@gmail.com