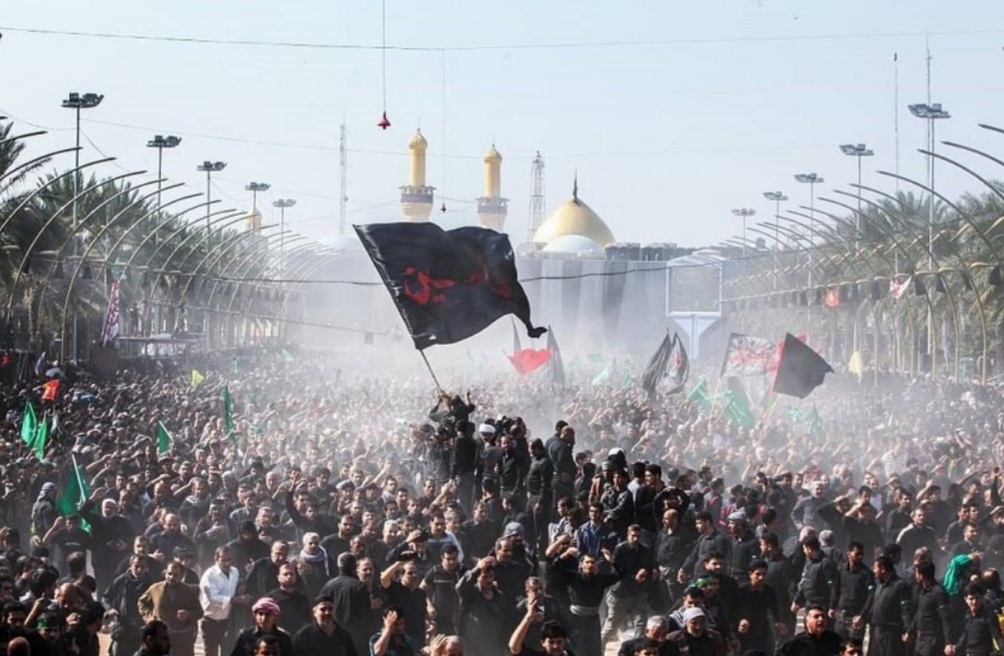 It would be wrong to say that there is a total media blackout regarding Arbaeen in the Western media, but what we can observe is that there is a relative dearth of reporting on what is considered one of the greatest, if not the greatest, peaceful gathering of people from all over the world. The Western news channels that do write on this topic resolutely describe this pilgrimage as one for Shia Muslims.

It has been described inter alia[ZK1] as the “Shiite holiday of Arbaeen” (New York Times, 2020), and as the “Shiite Muslim pilgrimage” (Independent, 2020). What is also striking is the language that is used to describe the walk in some of these editorials, as if it is an event which is mainly a theatrical display of exaggerated mourning practices.

Arbaeen shows us in the here and now the kind of society we can create. The imagery used in some of these reports insinuates exactly that, with scenes of black clothes and flags pitted against the red, of people seemingly driven to ecstasy by their mourning. In one fell swoop, a report such as this can debunk the whole of Arbaeen and the pilgrims as merely passionate and irrational followers of their faith.
Arbaeen is nothing like that though; Arbaeen must always be seen through the lens of the believer, or of a participant from a non-Muslim background. When considered in this way, we see the heart of Islam on display in this outpouring of love and mourning for the grandson of Prophet Muhammad.

What Arbaeen means to Muslims

Historically speaking, Arbaeen commemorates the end of the 40-day mourning period for Imam Hussain, his family and companions, after the battle of Karbala in 61 AH (680 CE). On the day of Arbaeen, pilgrims from all over the world congregate in the city of Karbala in Iraq, and especially in the Bayn al-Haramayn, the courtyard between the famous Holy Shrines of Imam Hussain and his half-brother Abulfazl Al-Abbas.

The first pilgrimage to the grave of Imam Hussain took place 40 days after the battle of Karbala in 61 AH. The family members, mainly women and children, who had survived both the fateful day of the battle, and the long march to Damascus as prisoners shackled by Yazid’s men[ZK2], visited him after their release. The pilgrimage to his grave continued for several more years, but then ceased. Around one hundred years ago, Iraqi pilgrims again started the annual walk, but this was fraught with great danger under the regime of Saddam Hussain, and had to be done in the dark of night in great secrecy. After the fall of the Ba’ath regime in Iraq, the annual pilgrimage became a more viable event, and continued even through the years of the Daesh in Iraq. In recent years, prior to the pandemic, more than 20 million people would typically attend.

Arbaeen showcases not just the unity of Muslims, but the humanity of all peoples

Reporting on Arbaeen in the news channels of the Islamic ummah far [ZK3]and wide focuses on the central elements of the pilgrimage: the hospitality of the Iraqi people, which has won UNESCO world heritage status; the gathering of many different nations and religions; the recognition of Hussain, the grandson of Prophet Muhammad, as the saviour of Islam in the face of a tyrant. Pilgrimage groups from all over the world are organised and invited to attend Arbaeen; Shia Muslims and Sunni Muslims take part, also non-Muslims are invited, for example Christians and Zoroastrians and even non-religious people flock there.

In the light of fearmongering and warmongering to which parts of the Western world has succumbed, Arbaeen is akin to a harbinger[ZK4] of hope for our malaised societies. The kindness, selflessness and generosity particularly of the impoverished sections of Iraqi society, who nonetheless do all they can to cater for the pilgrims, reminds of a hadith by Imam Baqir (as): in it, he describes the time when (Imam) Mahdi (aj) comes, that sincere and strong brotherhood will also arrive, and that a brother who needs money will put his hand into the pocket of his brother and his brother will not stop him. (Bihar ul-Anwar, vol. 52, p. 372).

Arbaeen shows us in the here and now the kind of society we can create: one in which we walk in friendship, love and brotherhood and sisterhood alongside each other, irrespective of our nationality, financial status and ethnic or religious background. At Arbaeen the physically able assist those who are weak, at times even physically carrying them to the destination. People welcome strangers into their houses and give them shelter and food. Despite the threat of terrorist attacks by Daesh cells, the pilgrim feels immense peace[ZK5], trust and safety.

We should view Arbaeen as a model for our societies; the historical events of the battle of Karbala and the fortieth day visit to Imam Hussain needs to have a bearing on our current lives, and should not be viewed as an event in the distant past. The kindness, mercy and fearlessness in the face of oppressors, qualities that pour from the heart of Islam, are practices that can be implemented in our modern lives, as witnessed in Arbaeen.

Arbaeen and the foreign powers in West Asia

The presence of foreign powers in West Asia is said to be to provide security, and to assist in defeating terrorist cells, however the region has observed a deterioration in the security situation in several countries despite their presence, and also increasing polarizations as well as sectarianism.

The security for Arbaeen is provided by Iraqis[ZK6], the organisation of the event is done partly in cooperation with Iran, so as to facilitate the processing of large numbers of pilgrims across the borders, and the volunteering is mainly Iraqi. The foreign powers do not assist, and one wonders what they must make of it, apart from the over-emphasis in their media that it is a Shia pilgrimage. It is certainly impossible to marginalise this “migration” on such a large scale, that despite covid and albeit much smaller numbers has continued. Likewise, it is impossible to marginalise Islam and its message for humanity, and Arbaeen is one place where we can all find the realisation of this message.